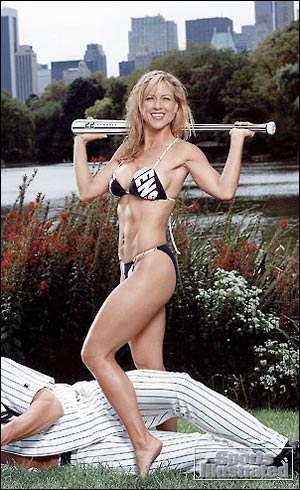 The Sports Illustrated swimsuit issue is on stands once again this year, and controversy’s a-brewing. The firestorm isn’t over body paint or a potential ‘slip,’ but a photograph from five years ago. While Roger Clemens and former trainer Brian McNamee can’t agree on how to spell HGH, there is consensus that Clemens’ wife Debbie was injected with the human growth hormone by McNamee prior to her photo shoot for the 2003 swimsuit edition (though they disagree on the details). Just a day before Roger Clemens read a statement to Congress confirming this, a panel of scientific experts testified to the same members of Congress about the facts and fiction surrounding HGH. To gain some understanding of just what might have been allegedly “enhanced” for Roger and his wife, we spoke on the phone with Congressional scientific panel member Dr. Thomas Perls of Boston University.

PopSci: We’ve all heard of it, and cringe at the sound of it, but what exactly is HGH?

Dr. Perls: It’s a hormone secreted by a small gland near the base of the brain called the pituitary gland. Its most important function relates to the growth and height of children. For really short children, who have trouble producing growth hormone, we know that injecting them helps them grow a few very important inches.

PopSci: So what does it do for adults?

Dr. Perls: Sadly and honestly, I think the athletes and entertainers have fallen for a bill of goods. Growth hormone is a terrific name. People equate it with youth, so it becomes the darling of the so-called anti-aging industry. Growth hormone is just something they’ve added to anabolic steroids in these multiple drug cocktails because it’s such a huge moneymaker, but in my opinion, based on what we know, it does very very little for you. If you look at the Internet sites and the literature put out by these anti-aging businesses, it’s almost always testimonials and anecdotes. They can’t produce any medical literature that indicates the almost panacea-like list of benefits they say comes from growth hormone. Even when they do produce literature, they’ve always misconstrued it to their ends.

Dr. Perls: Maybe it adds a little muscle mass, but most of that is probably due to water. The studies thus far show there’s very little in the way of improvement in strength.

PopSci: So what about Roger Clemens, why would he have allegedly taken it?

Dr. Perls: I absolutely do not believe that Roger Clemens took growth hormone in isolation. In all the cases I’ve reviewed, and what I’ve seen with other athletes, it’s almost always given in combination with anabolic steroids. Whether that’s Sylvester Stallone or Suzanne Summers they almost always take it with something else. There were instances, like (Yankee pitcher) Andy Pettitte’s, where they have an injury and they take HGH to try to recover more quickly. Pettitte may well have been told that it works by a trainer and fell for it. Who knows, getting an injection is an incredibly powerful placebo effect.

PopSci: Would you expect any difference in the effect of HGH on men and women?

Dr. Perls: My big concern would not be any difference in some negligible benefit but a risk for breast cancer. One of the real long term concerns for HGH is increasing one’s risk for cancer. Cancer is just unbridled cell growth, and so giving someone HGH is like throwing gasoline on a fire. If you consider that one out of nine women develop breast cancer, you’re really playing Russian roulette.

PopSci: Irrespective of side effects, do you think a single injection of just HGH made Debbie Clemens look better for the photo shoot?

Dr. Perls: Absolutely not. The kind of regimens you see at the anti-aging clinics is that it’s a drug that has to be given six out of seven days in a week. The idea that she would just get a single one or two shots hoping that it would make any kind of difference in terms of loss of fat or gain of muscle is just a sales job. From the medical records I’ve reviewed, in combination with other drugs like anabolic steroids which do build up muscle, people were noticing a difference within about three weeks.

PopSci: So what do you think the committee takeaway was from the testimony of your panel?

Dr. Perls: That it was a much bigger problem than a relative few athletes or entertainers. That the athletes themselves had fallen for this but that they can serve as incredibly important examples for others. That the risk of side effects far outweighs the benefits.

PopSci: Speak to some of the potential side effects.

Dr. Perls: People end up with carpal tunnel-like syndrome or joint pain or more severe stuff like diabetes or high blood pressure. The benefits are just nothing compared to the risk. Then there’s the potential long term risk of cancer. It just boggles my mind. I’ll tell you that this country, and the public in general, are incredibly prone to take testimonials hook, line and sinker. That’s what most of this stuff on HGH is based on.

PopSci: Alright, so pretend you’re an athlete wanting to enhance your performance at any cost, you literally wouldn’t take HGH?

Dr. Perls: That’s probably true. Maybe I’d have the trainer put a bunch of saline in the syringe and tell me it was HGH.