The 10 Best Cars At The Detroit Auto Show

From Acura's curvy NSX superhybrid to Infiniti's sophisticated Q60, these are our favorite vehicles from the 2015 North American International Auto Show 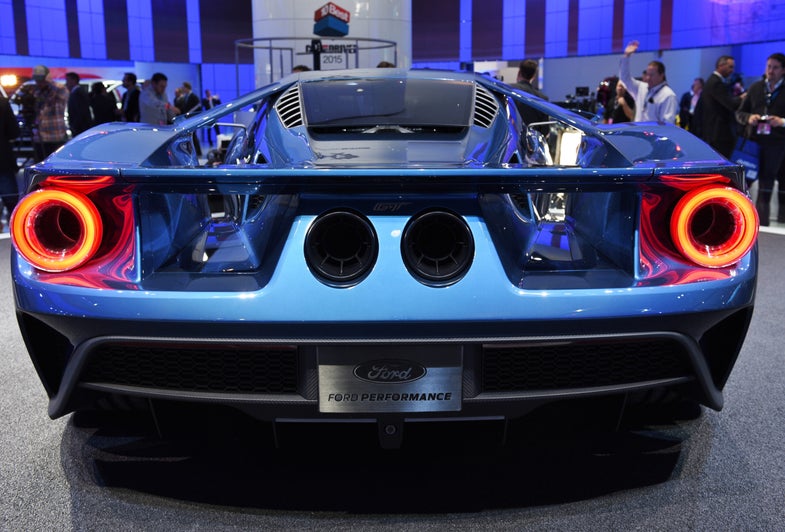 Detroit, as we call the North American International Auto Show, has always been a spectacle of automotive muscle and mischief. This year’s biggest story didn’t stray: It was the twin-turbo V6.

It’s now the engine of choice for the Acura NSX, the Ford GT, and the Infiniti Q60, among others, and a testament to how far engine technology has come. The engines we saw this year can wring so much power—600 horsepower, in the case of the GT—out of relatively modest mills, and their efficiency can skyrocket when paired with a lightweight chassis and a few electric motors, as Acura plans to do. Hybrid or not, these cars’ hearts sound beastly and will hold their own in the stratosphere of supercar tech.

That’s not to say Popular Science didn’t encounter any surprises in the showroom this year. Here are 10 vehicles that stood out among the crowd in Motor City. 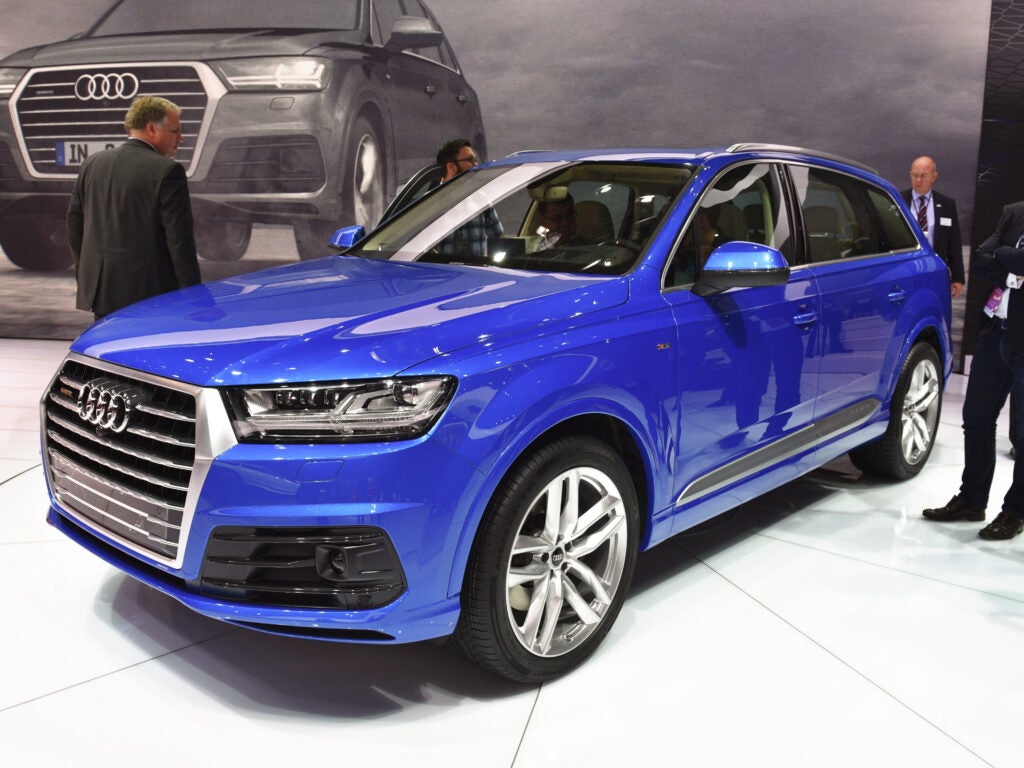 The 2016 Audi Q7 represents a quantum leap over its predecessor. It sheds more than 716 pounds, thanks to using lightweight aluminum and ultra-high-strength steel in its body and chassis. Combined with a new plug-in diesel hybrid engine, it will get up to 138 miles per gallon—roughly 26 percent more efficient than the prior model. The interior also debuts Audi’s new, easy-to-use Multi-Media Interface. [Read more] 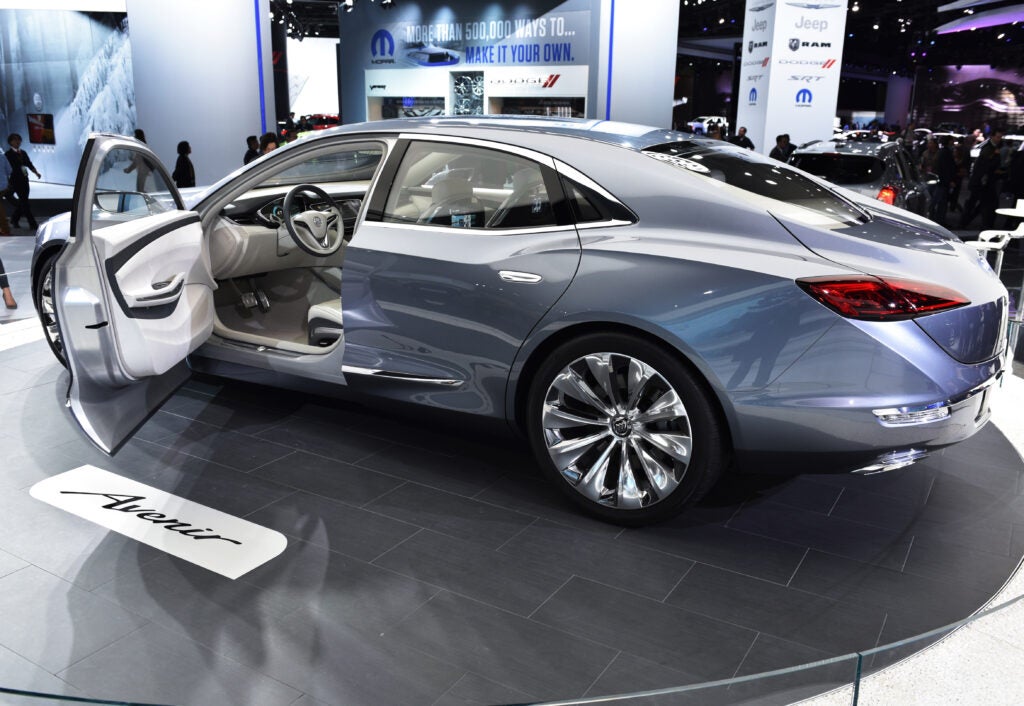 No one saw Buick’s concept coming, making it easily the biggest surprises of the 2015 Detroit auto show. The car is meant to show Buick is serious about creating beautiful cars in the future. But don’t get too excited: The company will not make a production version of the Avenir. Instead, it will incorporate design elements such as the shape of the headlights, the front grille and other details. 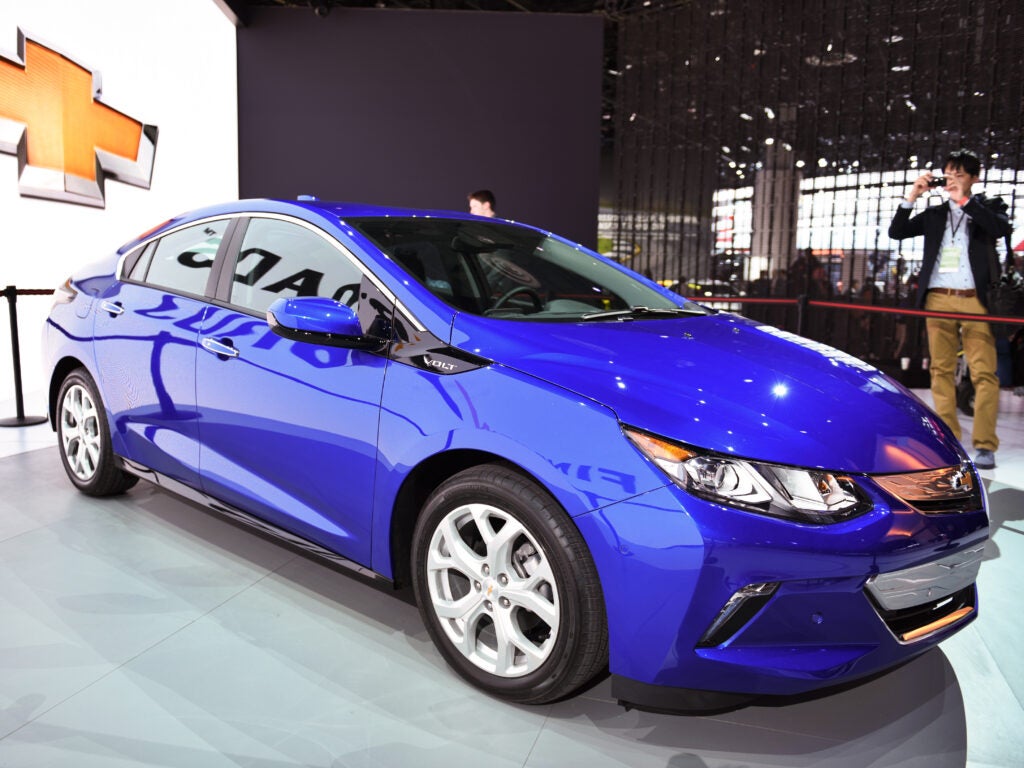 Chevy’s all-new Volt is a vast improvement over the original plug-in hybrid. The battery pack is smaller, lighter, and more powerful, which not only makes the car faster but also extends its electric-only range from 38 miles to 50 miles. Efficiency is also up, from 98 mpg-e to 102 mpg-e. Chevy added a center rear seat, which increases total seating capacity to five, as opposed to four in the current Volt. Look for the 2016 Chevrolet Volt at dealers in the second half of 2015. [Read more] 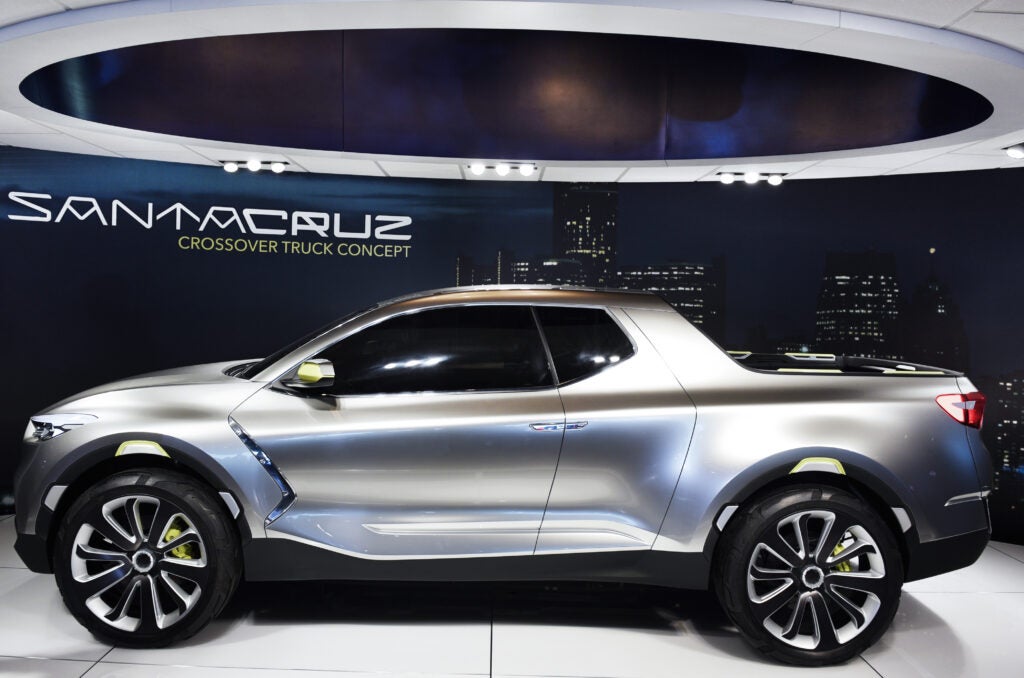 Hyundai is seriously considering building this crossover pickup truck-like thing. And we say, “Go for it.” For one, it looks cool. But more than that, not everyone who requires the use of an open cargo bed needs or wants to drive a hulking pick-up truck. Vehicles like this one are popular in other markets and no surprise why: With tidy dimensions and an efficient turbo-diesel engine, the Santa Cruz makes sense as something you drive daily. Though its cargo bed appears to be small, its tailgate slides out to expand the bed’s size. 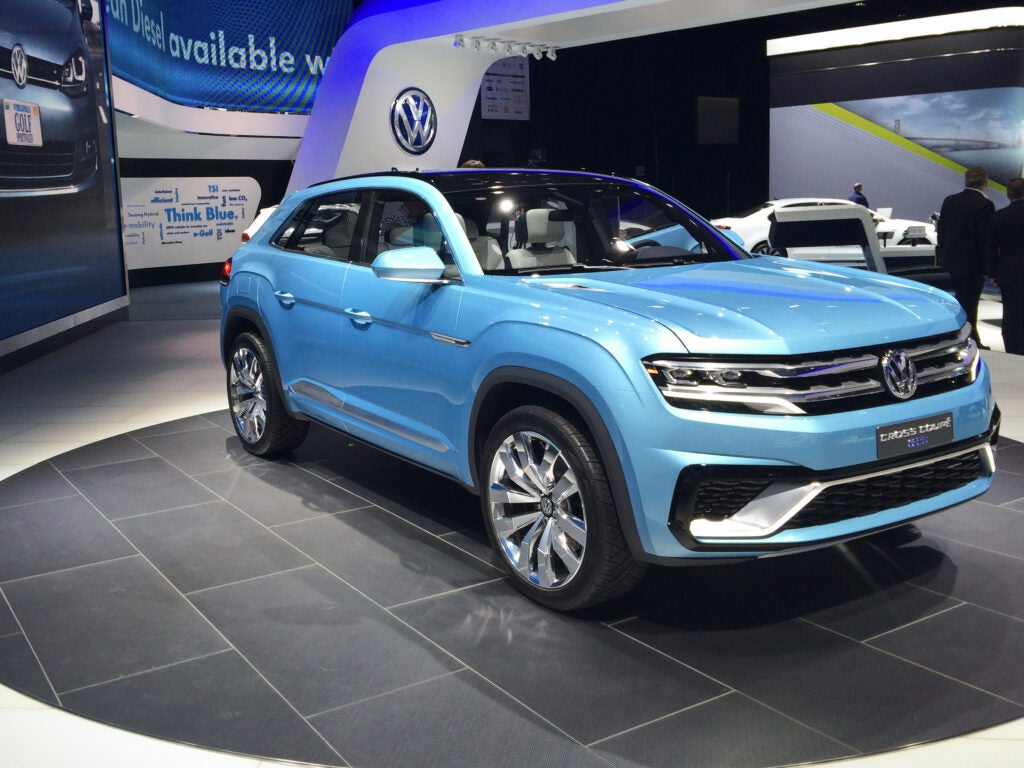 This is the third SUV concept Volkswagen has unveiled in the past year—and the best looking one to date. It gives an idea of what a new production model set to go on sale late next year will look like. The design is refreshingly restrained, both inside and out, with an interior influenced by the German Bauhaus movement. The Cross Coupe GTE is built on Volkswagen’s new modular architecture that can accommodate a variety of drive systems, including a V6 plug-in hybrid engine setup (seen in this particular show car), which is good for an estimated 70 mpg-e. 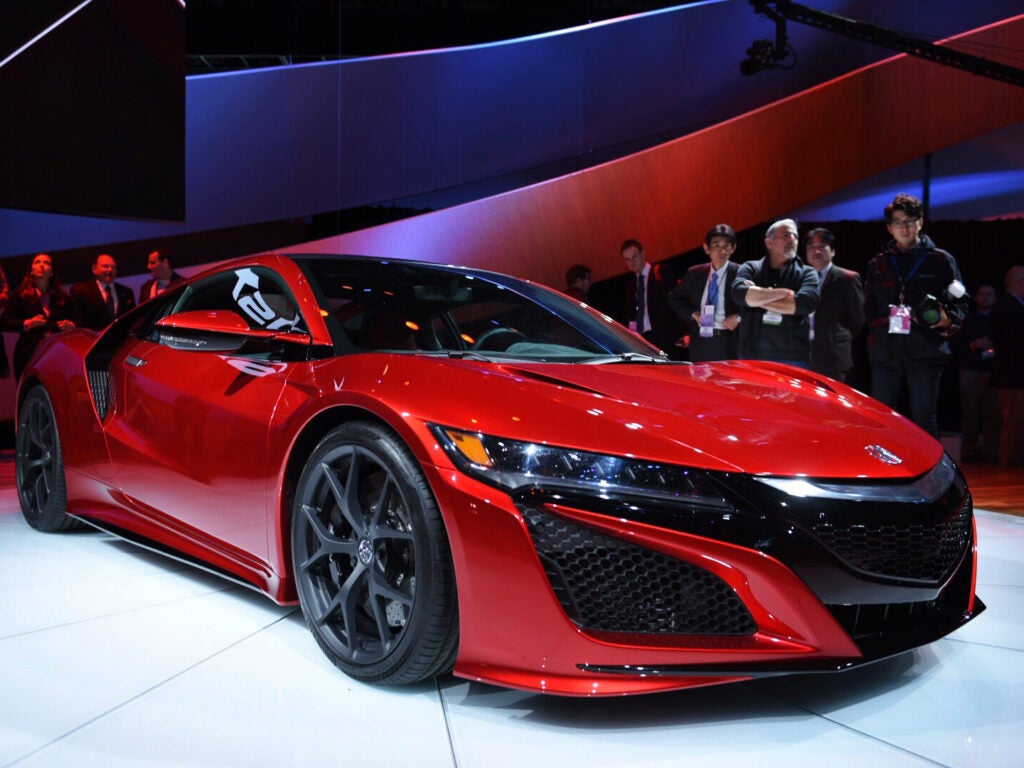 Acura and Ford are neck-and-neck for our “Best of Show” with their respective supercars. Yet while Ford’s GT is a concept model, Acura’s NSX is set to roll off assembly lines later this year. The striking hybrid machine—designed and to be built in the United States—has a new mid-mounted twin-turbocharged V6 engine good for more than 500 horsepower. It also packs a nine-speed dual-clutch transmission for instantaneous response and improved fuel efficiency. A three-motor hybrid system will generate stability, control, and power distribution so far only available from the trio of $1-million-plus hybrid supercars from McLaren, Porsche, and Ferrari. The composite-built coupe will cost about $150,000. [Read more] 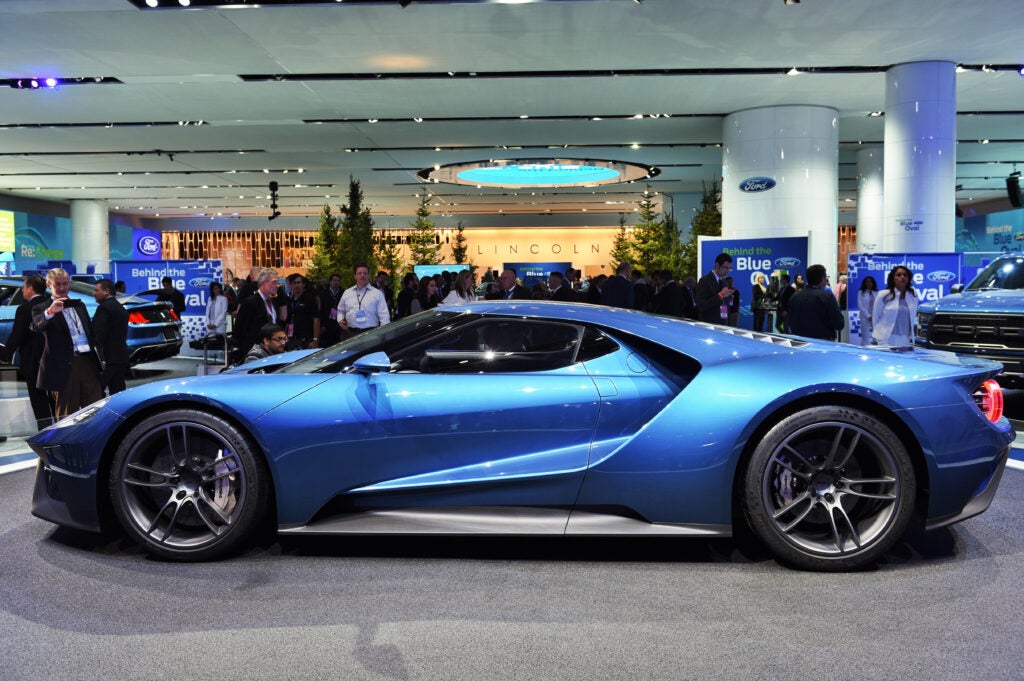 Ford’s revival of its cherished GT sports car garnered everyone’s attention. On the surface it shares much with the Acura NSX—both have twin-turbo, mid-placed V6 engines with dual-clutch transmissions—but the GT promises 100 horsepower than the NSX, rear-drive only, and its own unique spin on the supercar. It’s long and swoopy with dramatic scissor doors and unconventional, gaping air channels in the rear. Ford promises production next year, and even hints that it will start racing before that. [Read more] 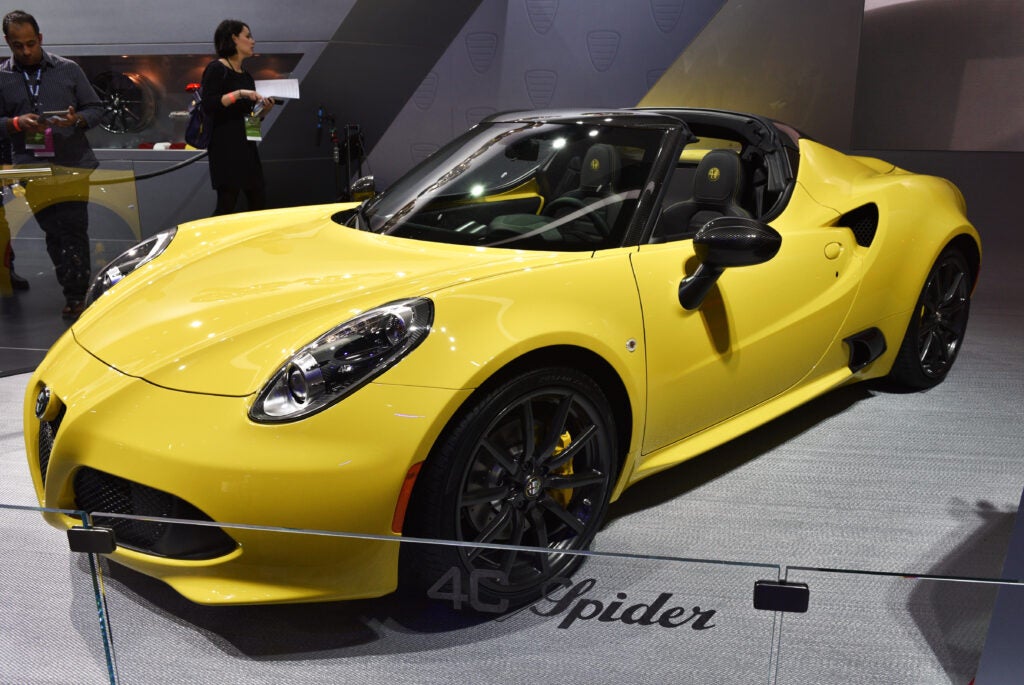 The only thing most Americans know about Alfa Romeo is that there’s a vague historical relationship with Ferrari, and their little convertibles were big in the U.S. decades ago. Alfa is back in the states now with the 4C Spider: their new, fully modern, mid-engined, carbon-fiber-packed coupe. So while it’s not quite a convertible, its removable roof will provide sweet Italian open-air driving at a fraction of the cost of a Ferrari or Lambo—i.e., somewhere in the $55,000-to-$60,000 range. The car is ridiculously light to help it reach 60 mph in just 4.1 seconds. Ciao! 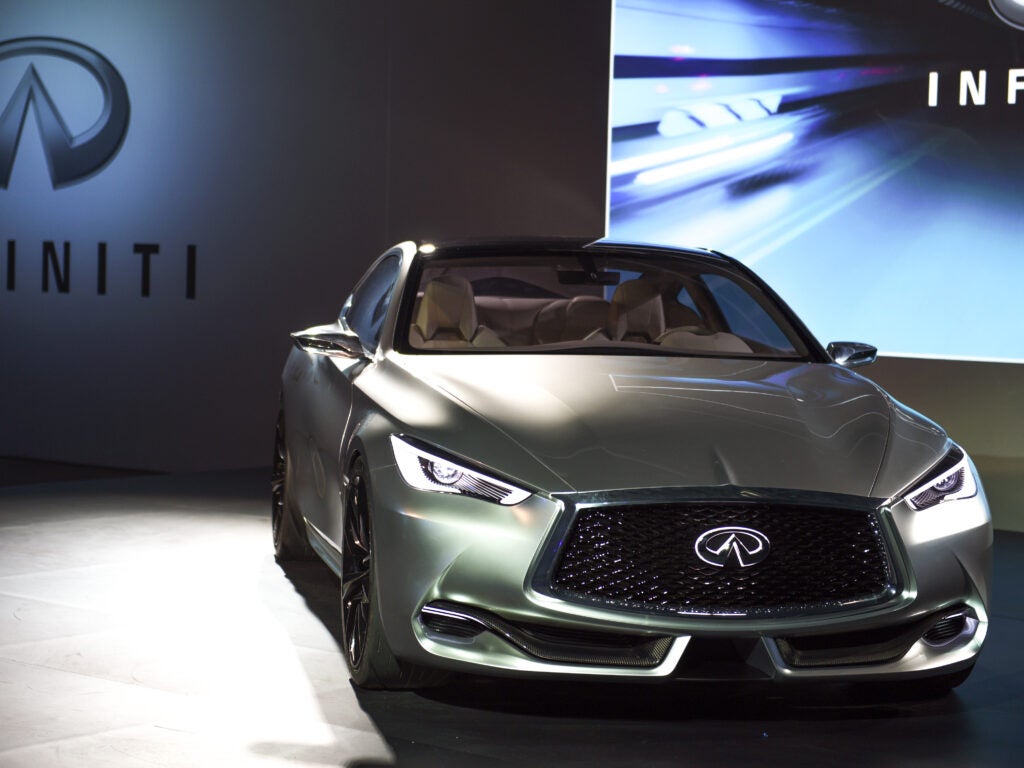 We fell in love with this sophisticated, grown-up sport coupe the moment we saw it. Its body has just the right amount of curve to accent flatter sections without going overboard, and a gaping grill that’s Rolls-Royce–huge without seeming like it’s too much. The front dam is inspired by Formula One racecars because, after all, Infiniti Red Bull runs a fierce racing operation. Also, the headlights: They’re narrow and perfect. Though still a concept, the sport coupe entry in Infiniti’s stable is due for a refresh, and if the production car is even close to this one, we’ll be thrilled. [Read more] 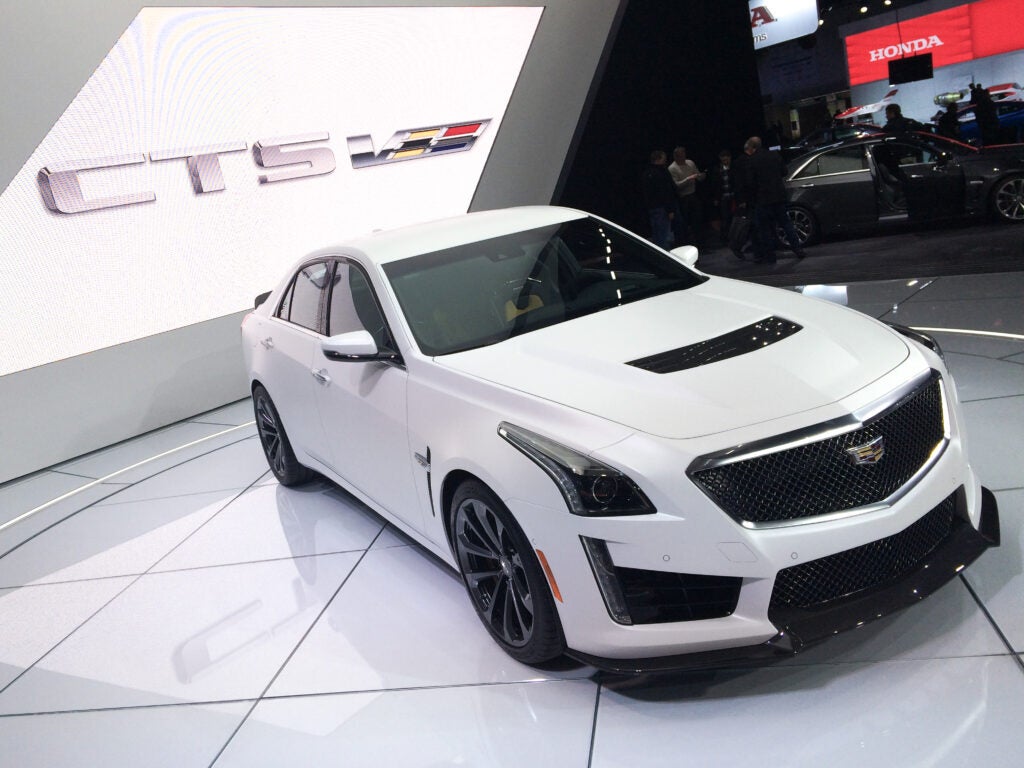 Cadillac updated CTS-V performance sedan with a 640-horsepower, 6.2-liter V8 engine—basically, it crams the new Corvette Z06 engine into an already capable Caddy. This car will produce a staggering 630 lb-ft of torque, good for a zero-to-60 mph time of 3.7 seconds. It also contains a high-tech automatic transmission (sorry, no manual available) that tweaks responsivity based on how you’re driving—though we’re pretty sure that “how you’re driving” will always be “hard and fast.” After all, it is a 200 mph sedan.
Vehicles