Shedding pounds for speed and efficiency 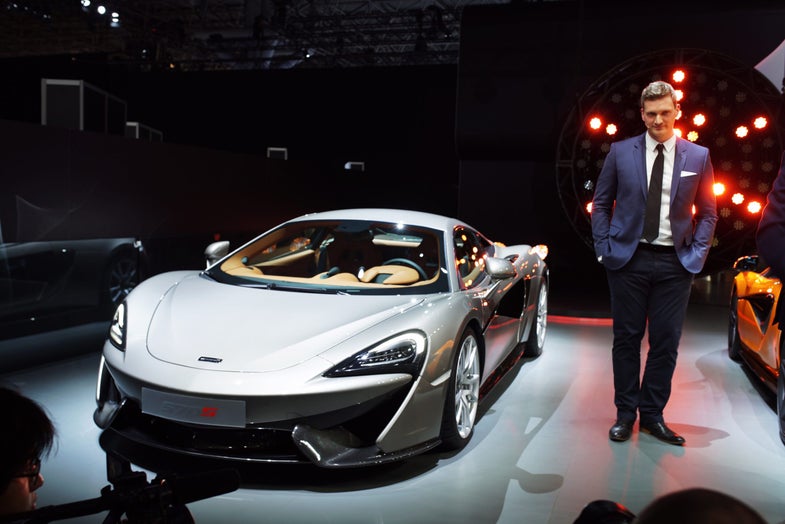 With all the technology and performance crammed into this “budget” McLaren, it’s hard to see how the British company shaved roughly $100,000 off the price of its big sister, the McLaren 650S ($267,900 MSRP). The 570S--the first model in its new, more affordable Sports Series--has a mid-engine, rear-drive configuration, and a twin-turbo V8. The result: A powertrain that’s good for 562 hp, a 0-to-60mph time of 3.2 seconds, and a top speed of 204 mph. No, this doesn’t sound like a budget supercar, and it will cost an estimated $180,000. But the 570S is a hair heavier (by 2,875 lbs) and a whisker slower than the more powerful (by 100 hp) and similarly styled 650s. It’s meant to go up against the likes of the Porsche 911 Turbo and the Audi R8, and on fuel economy alone it can: The 570S gets an estimated 25 mpg, which exempts this 200mph machine from the U.S. "gas-guzzler" tax. Eric Adams/Popular Science
SHARE

Every major car show chases some kind of theme. A few years ago, all that manufacturers could talk about was LED headlights. Then it was hybrid technology. Then accident avoidance. At the Detroit Auto Show this year, we found twin-turbo V6’s in everything from pickup trucks to supercars. Now, at the New York International Auto Show, the emergent attribute is lightness–as in, the judicious use of aluminum and other lightweight materials in vehicle construction to boost fuel efficiency and performance. Sluggish luxury sedans are ancient history. Welcome to the era of light-heavyweight automobiles. 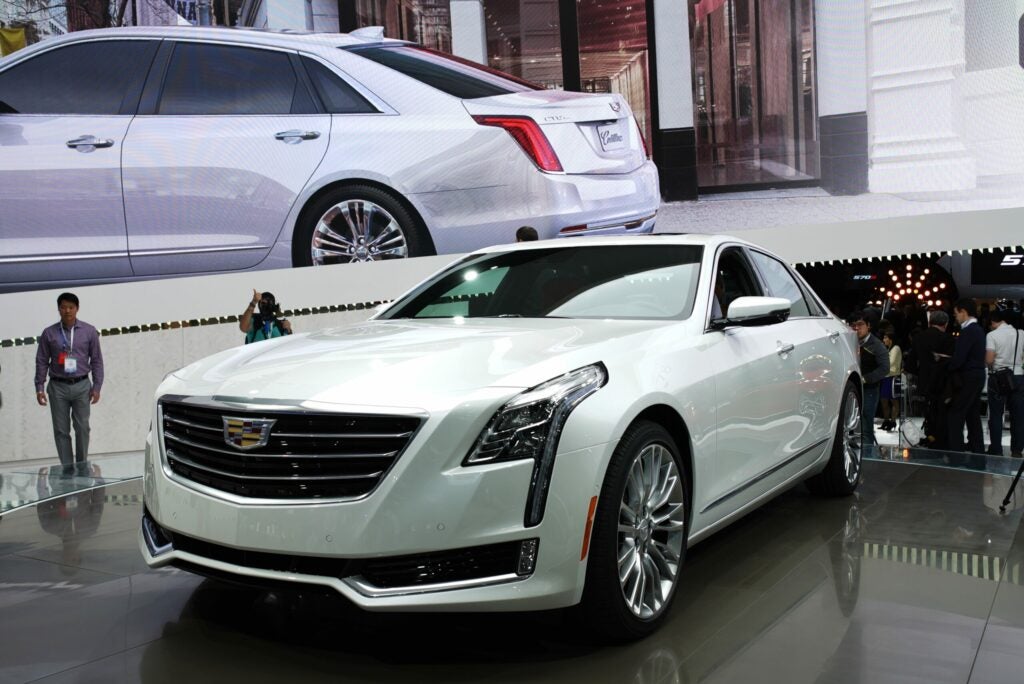 If there was an award for techiest auto show debut, the 2016 CT6 would take it home. As Cadillac’s flagship sedan, the car is meant to compete with the likes of Audi’s A8 and the BMW 7-Series. Its grown-up styling is a bit more refined, but where it trumps the competition is on the scales: The CT6 weighs 3,700 pounds, which is light for a luxury sedan, and even lighter than smaller sedans (including the BMW 5-Series). Cadillac achieved this by injecting aluminum everywhere it could in the car’s structure. Paired with an optional 400hp twin-turbo V6 engine, the CT6 packs some punch. Weight, however, is a key contributor to that ephemeral “luxury” quality ride. We’re cautiously optimistic Cadillac has this covered, given great attention paid to the car’s suspension–aka Active Chassis System and Magnetic Ride Control–which can respond with millisecond timing to changing road conditions. Other tech perks include advanced night vision, standard all-wheel-drive (on V6 models), automatic parking, a 360-degree camera view, and a 10-inch central touchscreen interface. 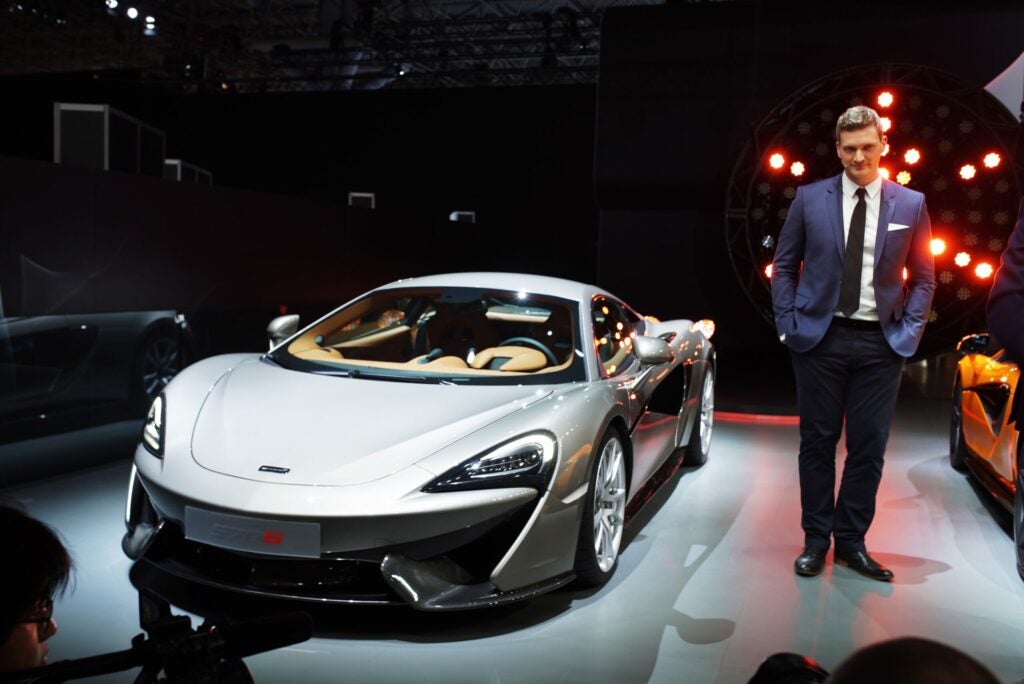 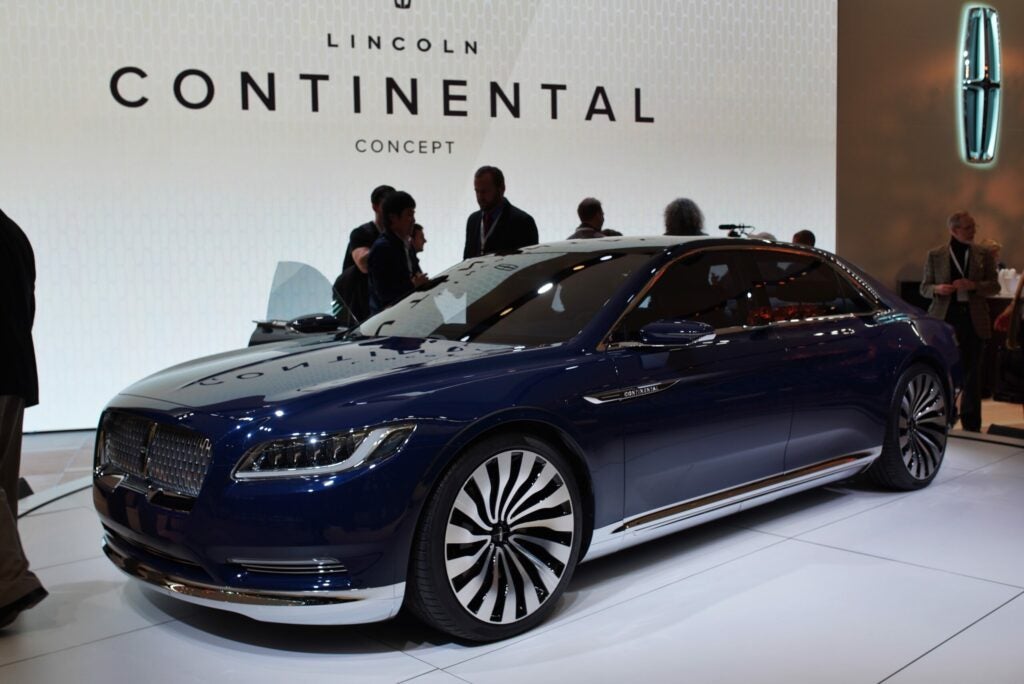 With a sumptuous, gadget-rich interior–electrochromatic glass! 30-way adjustable seats!–yet an exterior that’s true to its predecessors, the Lincoln Continental Concept might be the final nudge back to relevancy that the brand desperately seeks. Inside, the car harbors a re-tuned version of Ford’s turbocharged EcoBoost V6 engine. Outside, it features a finely detailed and pleasing exterior with big 21-inch wheels, which we’d love to see on a production model. (Big wheels look great, yet often fail to survive concept stage.) Lincoln needs this car to be a success, and even the most cursory glance at its sleek, low-slung design suggests it could win over both Lincoln faithfuls and auto enthusiasts who wouldn’t have considered the brand before. 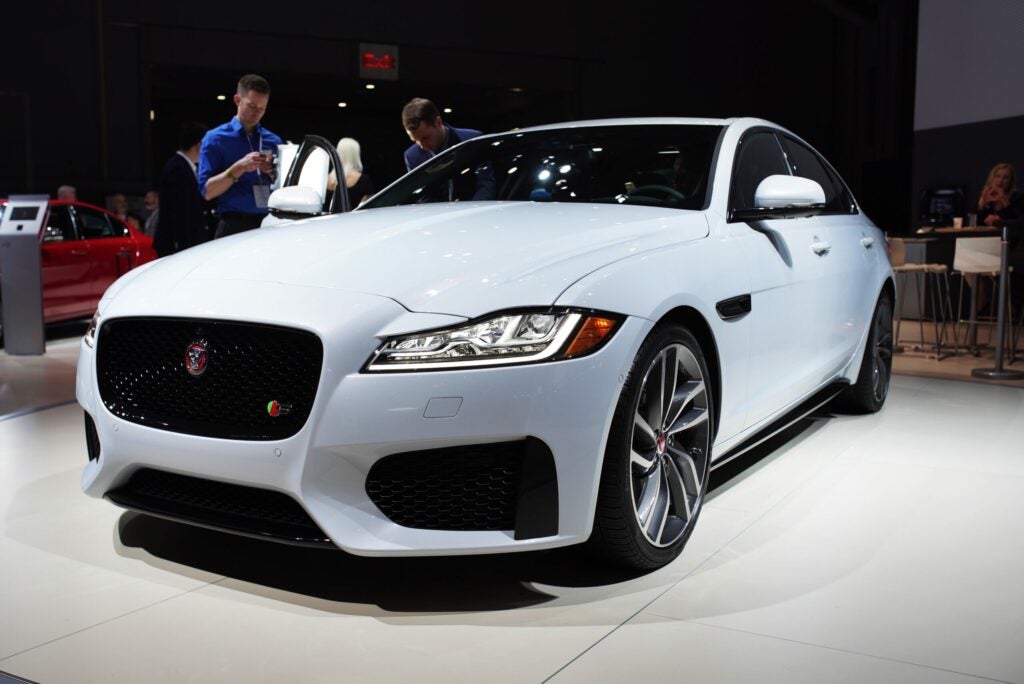 Jaguar’s redesigned XF–the model between its entry-level XE and flagship XJ–brings efficiency and weight-loss to the table. Where it sets itself apart from other cars at the New York Auto Show, however, is in the passenger seat. An Intel quad-core processor powers an entertainment display to provide super-fast navigation, voice commands, and passenger connectivity. It’s fast on the road, too, with a 0-to-60mph time of 5 seconds. The car introduces an industry-first (for conventional sedans) semi-autonomous driving feature for treacherous road conditions. On snow and ice, you simply steer the car while the computer controls your speed and traction. Such technology exists in high-end SUVs, but this is novel for traditional cars. 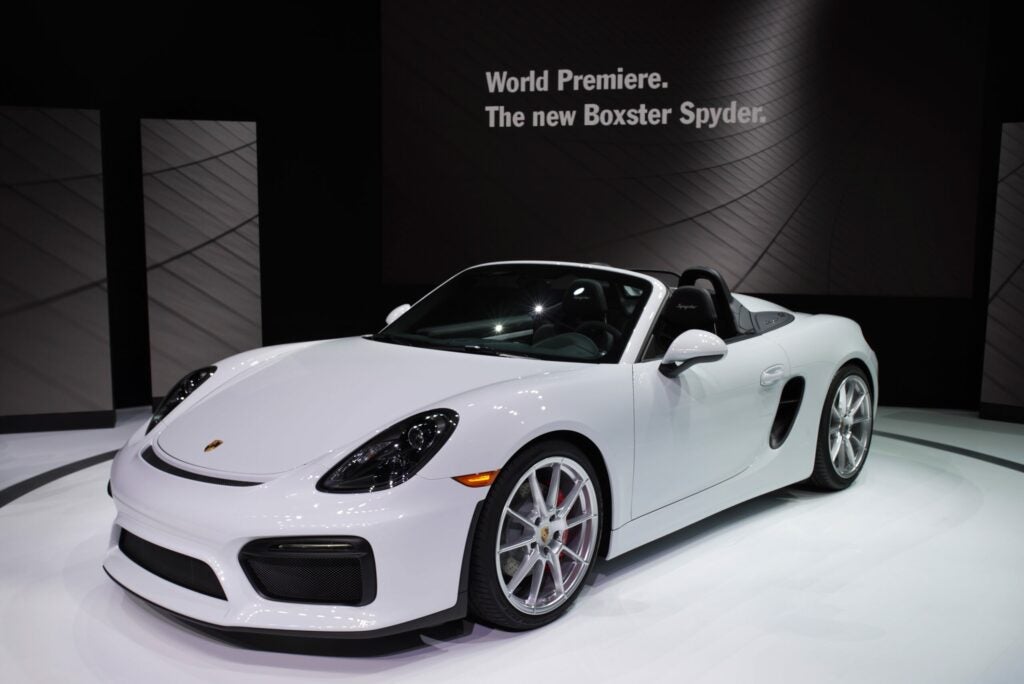 Lightweight construction is the secret behind the Porsche Boxster Spyder’s speed and handling. The new car model, which strips down the conventional Boxster to squeeze out more performance, is distinguished by a dramatic rear fairing. The part conceals a hand-operated fabric roof–and the absence of anything that weighs anything. No radio, no air conditioning, etc. That weight loss helps the Spyder clock in at a svelte 2,900 pounds. Propelled by a 375hp flat-six engine, the coupe can reach 60 mph in 4.3 seconds. The $82,100 vehicle is only available with a manual transmission. No automatic, no paddle shifters. Just you and your clutch. 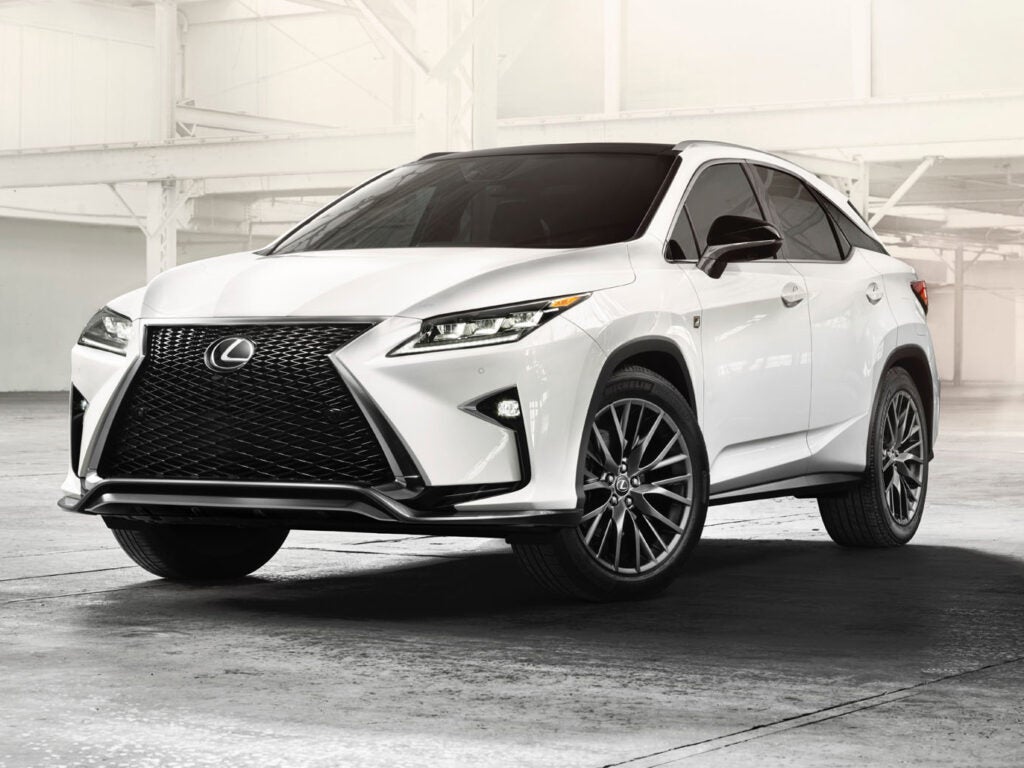 Lexus has redesigned its best-selling model, the RX compact SUV, and introduced a host of safety improvements. The company claims its Lexus Safety System+ can help avoid or lessen the severity of collisions by packaging together a few features: automatic-braking (e.g. in case the vehicle ahead of you suddenly brakes), lane-keeping assistance, dynamic cruise control all the way down to a full stop, and an assortment of traffic alerts and visibility monitors. Improved aerodynamics also smooth out wind noise and steering at high speed. Enhanced stability control and lighter wheels are also available in a performance enhancement package called “F Sport.” 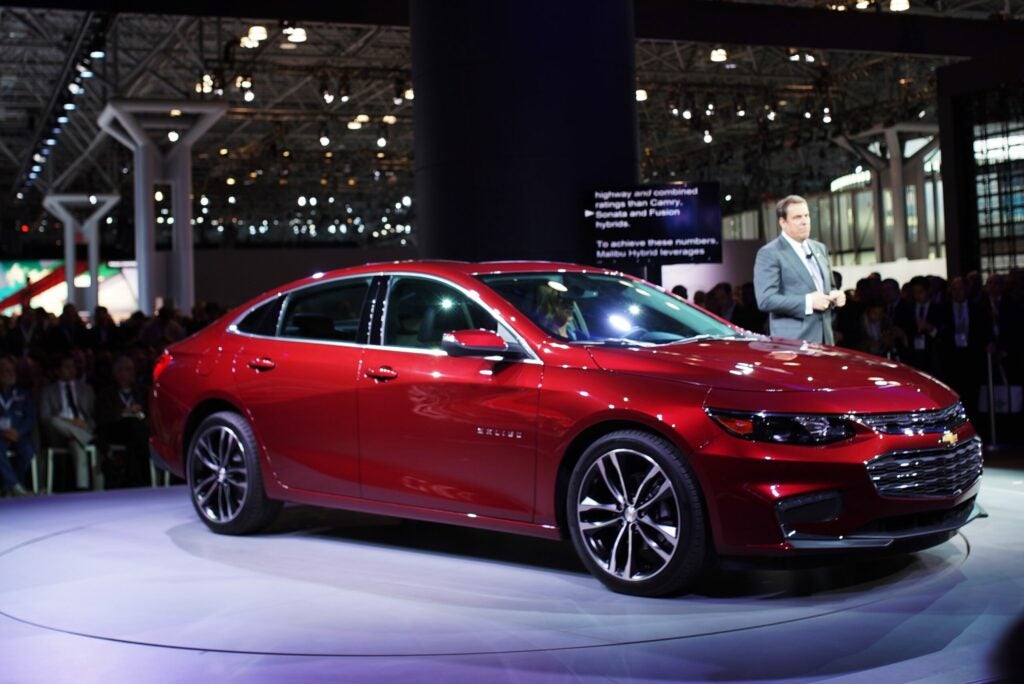 Chevrolet’s mid-sized stalwart, the reliable but not-always-inspired Malibu, arrived in New York this year with a sleek redesign. Chevy made the car longer, lighter, and more fuel-efficient in hopes of taking a bite out of a huge mid-size car segment dominated by Honda and Toyota. Engineers added four inches to the wheelbase for more room, and the car is 300 pounds lighter, which helps in handling and fuel economy. (Chevy estimates 37 mpg highway, 27 mpg city.) In terms of technology, the new Malibu has pedestrian braking and a new “Teen Driver” system–the sound system mutes when seat belts aren’t fastened, and a “report card” will clue parents in about average speeds, how many times active safety measures are engaged, etc. A hybrid version of the Malibu also debuted today, and it features technology from the well-tested Chevy Volt that bumps fuel economy up to 47 mpg combined. 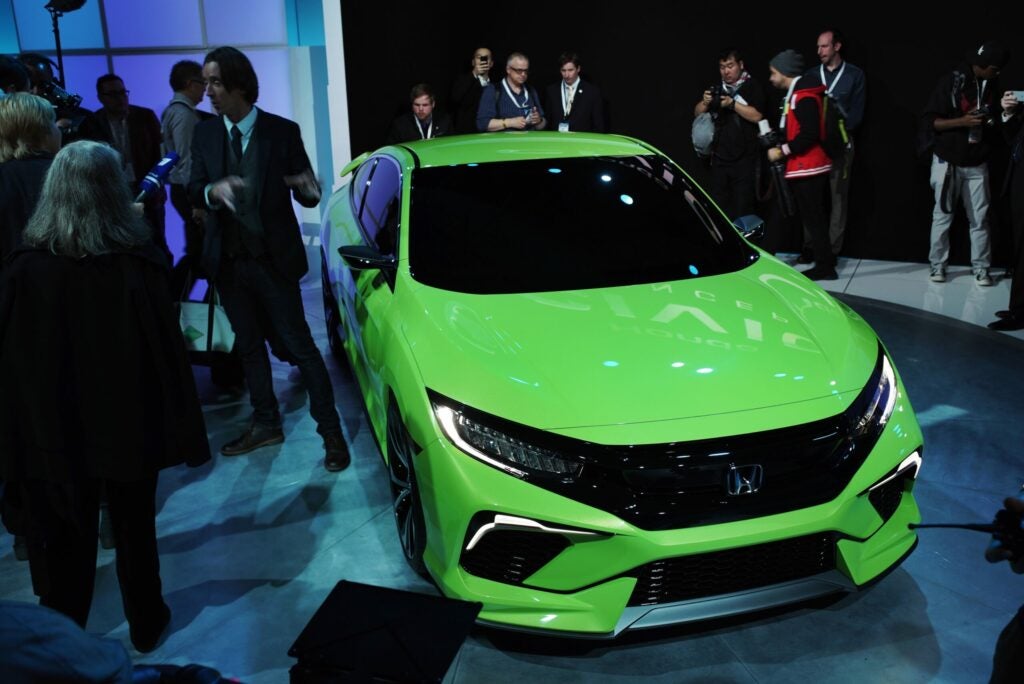 This reveal caught the auto show by surprise: a brand-new, 10th-generation Honda Civic. We saw the two-door coupe, but the first model will be a sedan version that goes on sale later this year. The car is aggressively re-envisioned, with more dramatic lines and front wheels closer to the fenders. But the big news here is Honda’s first turbocharged engine, a 1.5-liter four-cylinder type. Honda also announced they’re bringing the sport-tuned Type-R Civic to the United States–something the brand’s enthusiasts will welcome. 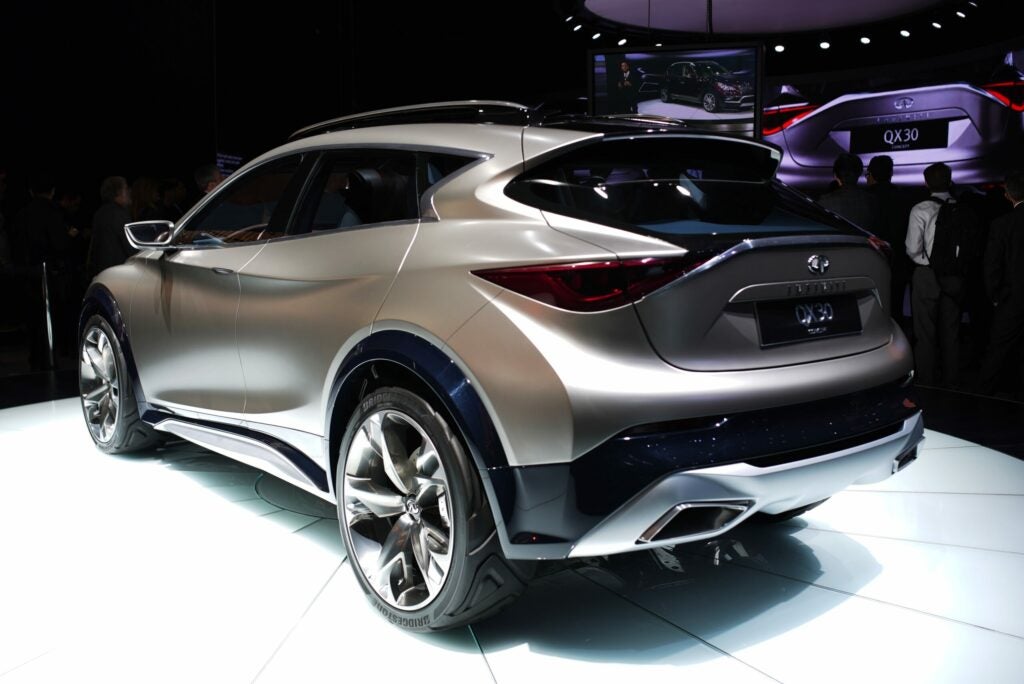 This is Infiniti’s vision for a premium compact crossover, which is one of the better-selling vehicle segments right now. The car’s streamlined look, both inside and out, is meant to give the crossover style a more athletic vibe. The seats are slim, and the interior colors warm and natural. Infiniti expects a production version to roll out sometime next year. 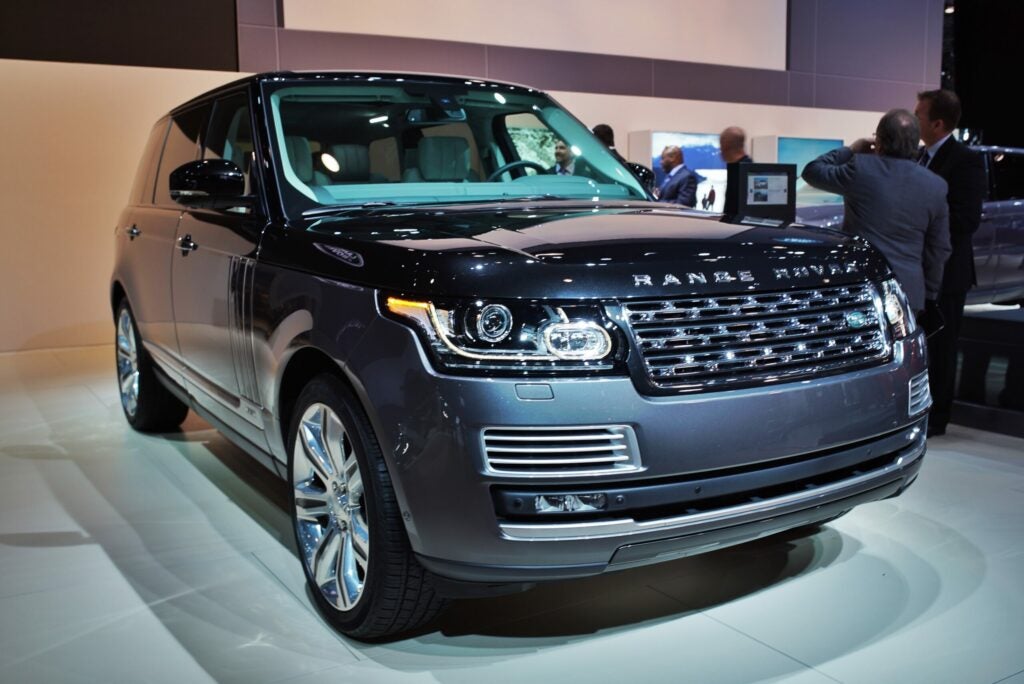 There’s no technology story here–and certainly no continuation of the weight loss trend–but the new Range Rover SV Autobiography is pretty. The car is a special edition of the current flagship Range Rover, and it comes with an alluring two-tone paint job, a specially milled aluminum gearshift, and a slick table that slides out from the rear (e.g. for picnics). The car, with its wide range of perks, will set you back about $200,000.