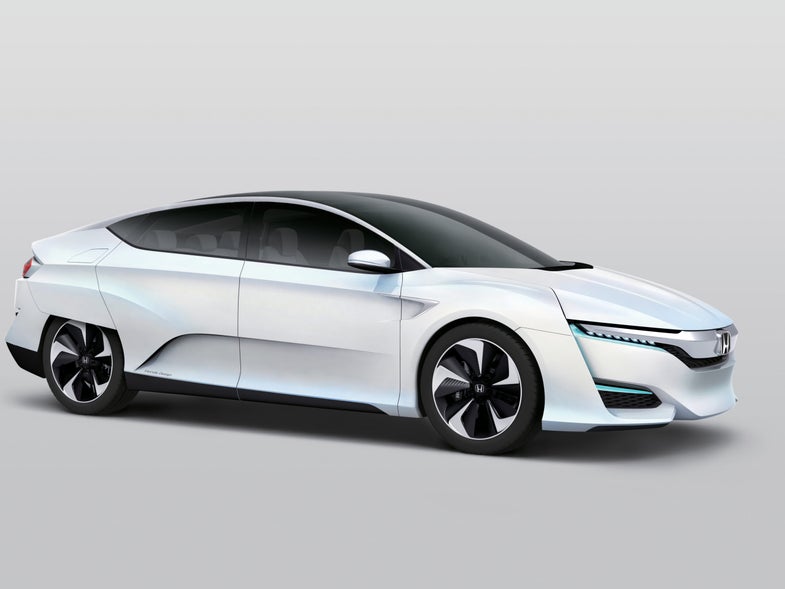 Fuel cell technology is a slow sell, but companies are still climbing on the bandwagon. Honda has been in the game for a while, with its newly retired FCX Clarity fuel cell vehicle. But fear not, fuel cell fans! The Honda FCV is making its North American debut in Detroit and will be available in the United States by late spring 2016.

The FCV made its world debut in Tokyo, so we know a bit about the updated car already. First of all, if the futuristic concept design carries over to the production car, it’s already an improvement over the rather bland outgoing FCV Clarity. And the FCV has more interior space, with seats for five.

More importantly but less noticeably, there have been upgrades to the fuel cell guts of the car. The fuel cell power train fits entirely within the engine compartment, which saves space and makes it easier to use in other vehicles rather than just one bespoke body. The fuel cell stack has 100kW more power output than the FCX Clarity and 60% more power density, all while being a third smaller than the older fuel cell stack.

In practical terms, that smaller stack led to the roomier passenger compartment. Plus, the improvements to the power train give the Honda FCV a 300-mile driving range. Honda also announced last fall that it would provide nearly $14 million in financial assistance to FirstElement Fuel to build more hydrogen fueling stations in California. Building the cars and funding the fueling stations is part of the attempt to close the chicken-and-egg loop of hydrogen fuel cell vehicles and the stations that can refuel them.