Ford takes steps to protect driver data, not sell it 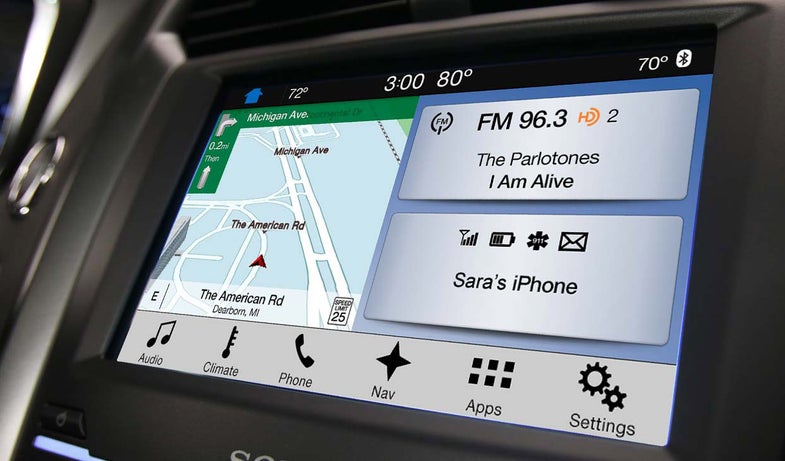 Ford considers your in-car data—including navigation info—to be yours and not for sale. Ford Motor Company
SHARE

Ford’s latest communications and entertainment system, Sync 3, is on display at the North American International Auto Show in Detroit, and it has a new interface, faster response times, and the ability to update over the air using Wi-Fi—just like your smartphone.

Yes, it’s 2015 and we tech-savvy consumers expect no less. What’s unexpected, however, is the carmaker’s approach to security: Unlike most companies that vacuum up personal information, Ford believes control over your data is your right.

“There’s an overt opt-in every time we use data,” Doug VanDagens, Ford’s Global Director of Connected Services Solutions, told Popular Science. “We only ask for data in order to complete a transaction the user has requested.” When nearly every user agreement we click on demands unfettered access to our digital lives, this seems hard to believe. But VanDagens clarified Ford’s position: “We are not trying to monetize your data. We don’t sell, collect, or aggregate your data.”

Sync 3‘s focus is on the vehicle itself; safety and emergency services are its priority, and a lot of the intelligence gathered by a host vehicle’s sensors are processed onboard. “Being connected to the cloud enhances driving, but it’s not required,” VanDagens says.

“We are not trying to monetize your data. We don’t sell, collect, or aggregate your data.”

Ford knows how addicted we all are to our smartphones, which is why the Microsoft-based Sync 3 will play nice with both Apple CarPlay and Android Auto. That’s in addition to Ford’s own AppLink system. “We take an agnostic approach … because customers want that access,” VanDagens says.

This week Ford also announced that Sync 3 will be able to connect a mobile phone’s navigation app to the touch screen in the console (via AppLink). Ford is working with Alibaba to integrate the open-source SmartDeviceLink technology into both apps and AppLink in Ford vehicles to better integrate smartphones and on-board systems.

Despite Ford’s new focus on data privacy, bear in mind that if and when you connect other tech and apps to Sync 3, you’re on the terms of those outside companies.