Is it possible to be too flexible?

Yoga might make you too bendy without making you strong enough to handle it. 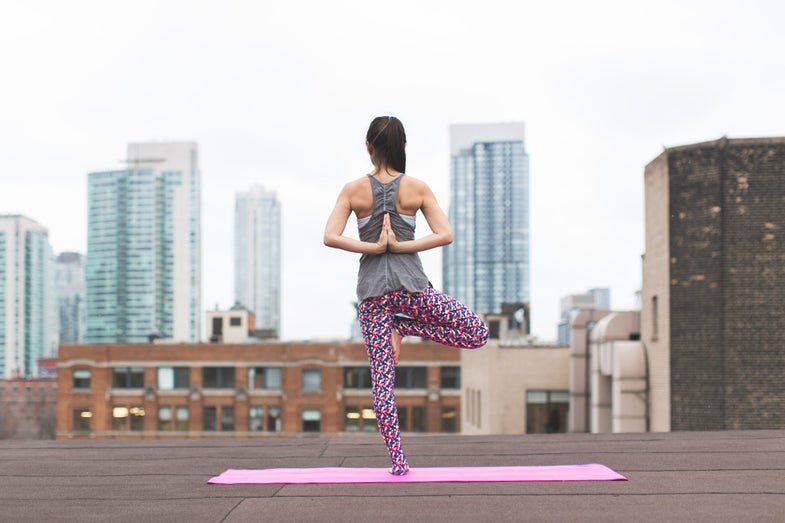 Yoga class is all about poses, from the basics, like bridge, chair, and cow pose, up to complicated headstands and one-armed, twisting backbends. Expert practitioners can seem to tie themselves in knots.

Their extreme flexibility isn’t necessarily a sign of anything dangerous. But being very, very flexible can put people at risk for injuries if their bodies don’t have enough strength to stabilize their muscles as they stretch and bend. Activities like yoga, which only use a person’s body weight, can run the risk of improving flexibility without ensuring that they get stronger at the same time.

The old-school model of flexibility thinks of muscles as rubber bands, which stretch out to accommodate the movement of a particular body part. Pull the rubber band, and it will gradually become more pliable, and allow the body to move more freely. However, that idea has fallen out of favor, says Matthew Taylor, physical therapist and former president of the International Association of Yoga Therapists. “It’s really about motor systems,” he says. Flexibility is more a combination of the stretch in your muscles, the mobility around your joints, and your internal awareness of where, exactly, each part of your body is—and how to get it where it needs to go.

It’s possible to change some aspects of flexibility: you can get better at monitoring the positioning of your arms and legs, and (although the evidence is mixed) it might be possible to lengthen your individual muscle fibers. But your ability to, say, touch your toes also depends on things you can’t change, like the bone structures where your hip meets your femur or the arch of your spine.

Flexibility is on a spectrum. If you’re on the stiff end, and your bones link up in particular ways, it might not be possible to get into certain positions in a yoga class without modifications. Some injuries occur, though, when people doing yoga try to force their bodies into those positions anyway. Take downward dog, Taylor says. Pushing your butt upwards from all fours means that your spine has to bend, slightly. But if your spine doesn’t move, and you still move into the posture, your shoulders have to bend, instead. It seems like you’re flexible enough—but you’re not.

“People still look like they’re in a downward dog,” Taylor says. “But they’re over-bending at the shoulder, and the soft, vulnerable tissues get pinched. That’s when we see a breakdown, and could have a shoulder injury.” Some yoga instructors can see and correct bad form that might lead to this kind of injury, but many don’t.

At the opposite end of the flexibility spectrum are people with a condition called joint hypermobility syndrome, which occurs when the collagen in their bodies—which makes up connective tissues like ligaments—is weak. That makes joints particularly loose and floppy. People who are hypermobile can do things like put their hands flat on the floor with their knees straight, or bend their thumb back to touch their forearms. It can cause pain and increased injury risk, but it’s often underdiagnosed.

If someone is hypermobile, they might be able to place their body in the position required of a complex yoga pose, but they might not have strength to hold themself there. Instead, they’re putting all their weight on the joint, potentially pushing the range of motion past what’s healthy and irritating the tissue in the process.

People with yoga-linked injuries often have loose or lax joints, Mitchell says, but that doesn’t mean that the yoga caused the laxity in your joints and muscles by increasing someone’s flexibility—there isn’t enough research, yet, to say if that can happen. It’s probably more likely that people with hypermobility, diagnosed or not, are drawn to yoga or other activities that reward bendiness.

However, yoga doesn’t focus on building strength, which is why injuries might occur in people who are naturally more flexible. “All these people are coming to yoga, and they’re not getting any strength training. People say that they get hurt because they’re overstretching, but the yoga probably didn’t cause the problem—it was already there, the yoga just brought it out, because they were doing so much stretching,” Mitchell says.

It’s possible for people who are hypermobile to do yoga safely, Taylor says, they just have to be especially cautious to keep their joints in control. “You can move just as far, but you do it in a stable manner.”

Even for people who aren’t hypermobile, it’s important to develop strength alongside flexibility. Stronger muscles are capable of handling more tension and stretching, Mitchell says. “There’s a reason that deadlifters don’t tear their hamstrings when they bend over,” she says. Strength means a muscle can withstand a force, like the increased tension from twisting into a yoga pose. But without that strength, the body is exposed to forces that it’s not adapted to handle, and that repetitive stress could cause injuries.

It’s fine to work towards more flexibility, and practice complicated yoga poses, as long as the body is structured in a way that can handle it, Mitchel says. Stretching is important, and it can help keep muscles healthy and prevent muscle pulls and tears—it just can’t be the only thing someone does for their exercise routine. “We need to balance stretching with strength.”