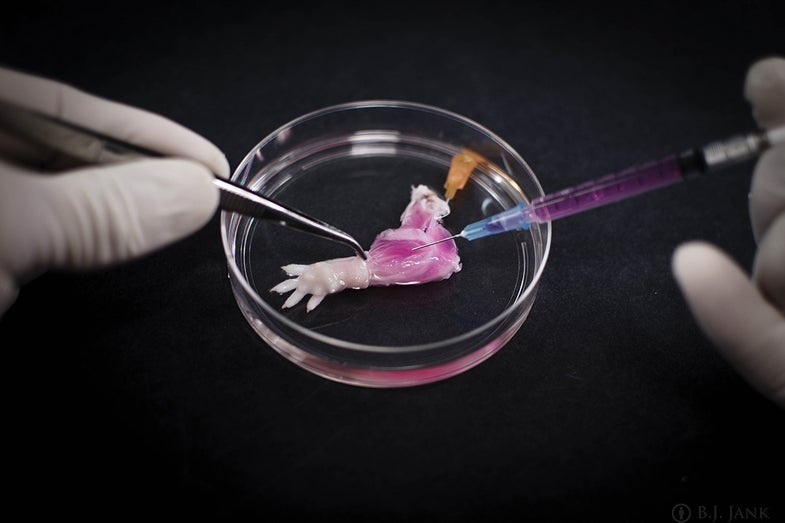 Right now, if you’re one of more than 1.5 million Americans who’ve lost a limb, you don’t have a lot of options when it comes to replacing it. Prosthetics tend to be clunky, limited in function, and lacking in tactile feedback. Hand and arm transplants have been successful, but require you to be on immunosuppressants for the rest of your life. A better option is on the horizon: In a decade or so, scientists are hoping they’ll be able to regenerate your lost limb using your own cells.

Researchers from Massachusetts General Hospital have just taken a big step in that direction. They’ve managed to grow a rat’s forearm—or at least the blood vessels and muscles—in a bioreactor. The next step will be conquering bones, nerves, and other tissue.

To make this Frankenstein rat arm, the scientists used a technique that’s already regrown kidneys, livers, and hearts. So far this is the most complicated application of the technique, since multiple tissue types are involved.

The first step involves using a detergent to strip away the cells from a donor limb. A week later, all that’s left is the arm’s collagen scaffold. Next, muscle and vascular progenitor cells from the rat who’ll receive the arm transplant are seeded onto the scaffold. The scaffolding helps the cells build blood vessel and muscle tissues in the right size and shape. Watch the limb take shape here:

Because all the donor’s cells are gone, the transplanted arm will presumably play nice with the recipient’s immune system.

The next step will be learning how to regrow nerves, bone, cartilage, and connective tissue. That could prove to be a significant challenge, but hopefully not an insurmountable one. “In clinical limb transplantation, nerves do grow back into the graft, enabling both motion and sensation,” Harald Ott, study author and surgeon at Mass General, said in a statement. “We have learned that this process is largely guided by the nerve matrix within the graft. We hope in future work to show that the same will apply to bioartificial grafts.”