Breaking down the Stratolaunch, by the numbers 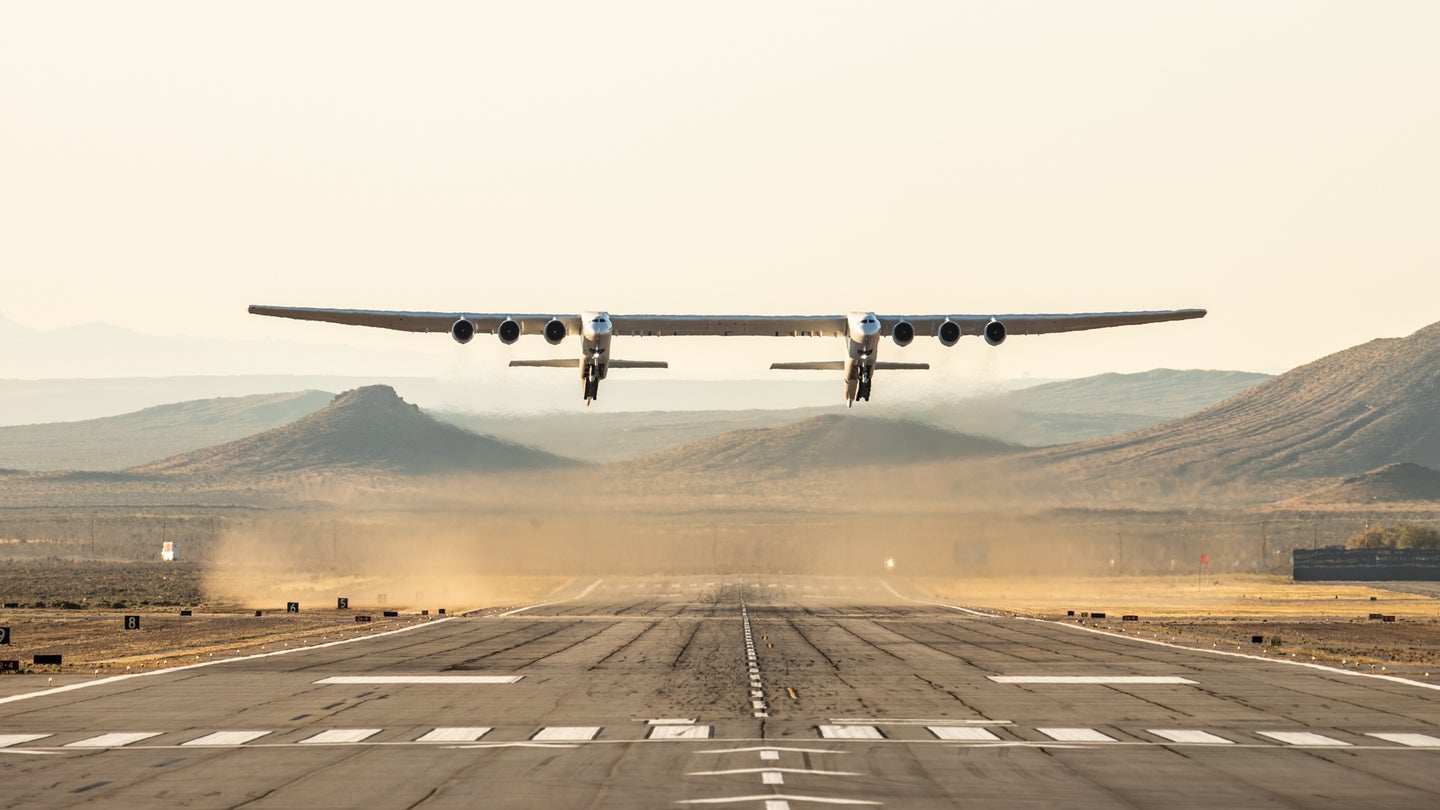 An enormous aircraft, with a wingspan that stretches nearly 400 feet across, took to the skies on Saturday. With more engines than you could count on one hand, the plane—called the Stratolaunch—is the biggest in the world (if you’re measuring by wingspan). Someday, if all goes according to plan, it could serve as an airborne launching pad for rockets that could then heft satellites into orbit. The idea is that a rocket would hitch a ride under the center wing of the plane, and take off from there at an altitude of 35,000 feet.

The maiden flight of the weird bird lasted over two hours. It eventually came down for a safe landing on a runway in Mojave, California. Here’s what to know about the Stratolaunch, by the numbers.

Remarkably, if you put three Boeing 737 MAX aircraft (the planes currently grounded by Boeing) wingtip to wingtip, the Stratolaunch would still be wider. It’s also 25 feet longer than a football field, which might help you picture just how giant it is.

The plane’s length, from tip to tail, is just a little bit longer than a Boeing 747-800. That’s about as long as 18 Toyota Corollas parked bumper to bumper.

Thrust to propel the plane into the air comes from half a dozen engines made by Pratt & Whitney—they’re the same type of engines you could find on a Boeing 747. Three engines attach to one outer wing, and the other three are on the other outer wing. The inner, or center, wing is for the craft’s payload.

Six engines is a lot. Commercial aircraft, even long-distance wide-body planes like the Boeing 787 or Airbus A350, generally only have two.

When you sit in a commercial plane, you’re in the part of the craft called the fuselage. This strange plane has two, 95 feet apart, allowing for that big center wing space between them. Wondering where the pilots sit in such a weird-looking flying machine? They’re in the cockpit, which is located in the right fuselage.

That’s the height of its two tails. While that may seem like a lot—and it’s certainly taller than the tail of a 737—it’s not insanely high for a big plane. A 747-800’s tail is taller, and so is the tail of an Airbus A380.

That’s the maximum weight that this bird can weigh at take-off. That includes the payload, which can be as much as 500,000 pounds. The plane itself weighs in at 500,000 pounds, too. (Remember, when calculating the total take-off weight, you need to take fuel into account, too.)

All of that means that the aircraft can carry the weight of about 175 Toyota Corollas.

While the plane is on the ground, it needs to roll, and does so on more than two dozen wheels. That’s six more than you’d find on a giant double-decker A380. The plane is built from composite materials, but also makes use of more traditional aircraft parts, such as “proven 747 engines, avionics, landing gear and flight controls,” according to Stratolaunch.

The Stratolaunch hit a top speed of 189 mph during this test flight, which lasted 2.5 hours on Saturday. So what’s it like to fly this beast? The pilot, Evan Thomas, said in a press briefing that the flight was “smooth.”

“We saw a few little things that were off nominal, but really for a first flight, it was spot on,” he added. He also noted that the plane is “very complex,” but that’s its systems “ran like a watch.”

The plane has safely flown—it reached an altitude of 17,000 feet—but it’s unclear when it might fly again, with or without a rocket payload. “Today’s flight furthers our mission to provide a flexible alternative to ground launched systems,” the company’s CEO, Jean Floyd, said in a statement.