Will The Milky Way Get Strangled To Death?

It was a neighboring galaxy, in a cluster, with the rope 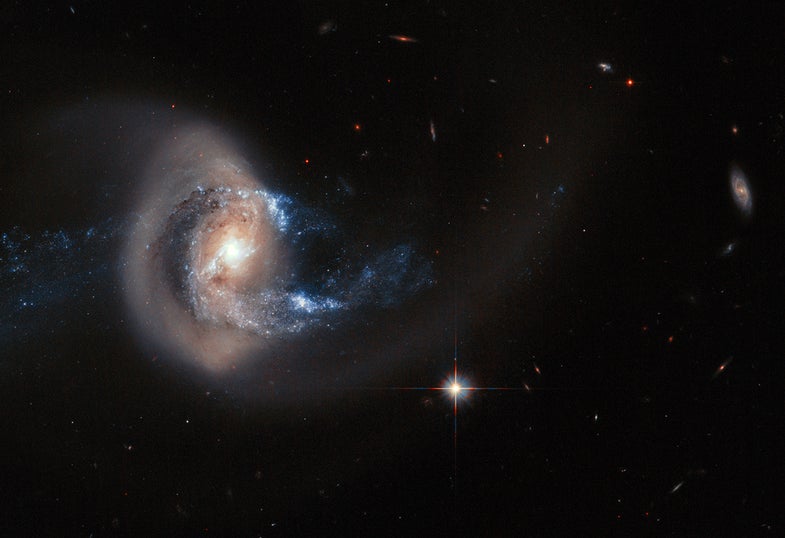 NGC 7714 is a spiral galaxy 100 million light-years from Earth — a relatively close neighbour in cosmic terms. The galaxy has witnessed some violent and dramatic events in its recent past. Tell-tale signs of this brutality can be seen in NGC 7714's strangely shaped arms, and in the smoky golden haze that stretches out from the galactic centre — caused by an ongoing merger with its smaller galactic companion NGC 7715, which is off the top of the frame of this image.
SHARE

Just like lifeforms here on earth, galaxies can die. And it isn’t always pretty. A paper published in Nature suggests that most galaxies die by strangulation.

A galaxy is pronounced dead (or quiescent, which doesn’t sound as dramatic) when it stops producing stars. Star production requires the presence of gases like helium and hydrogen, which get turned into heavier elements or metals as a star forms. Researchers looked at thousands of nearby galaxies, both alive and dead, and found that while the living galaxies had a pretty even ratio of gases to metals, the dead galaxies had vastly higher concentrations of metal. The imbalance indicates that the galaxies slowly suffocated after their supply of gas was cut off, fashioning a few last stars with the remaining helium and hydrogen–just like a strangled person would slowly use up the last of his or her oxygen.

“This is the first conclusive evidence that galaxies are being strangled to death,” Yingjie Peng, the lead author of the study told the BBC. “What’s next though, is figuring out what’s causing it. In essence, we know the cause of death, but we don’t yet know who the murderer is, although there are a few suspects.”

The nefarious criminals in the lineup? Neighboring galaxies in crowded clusters that might be siphoning off that cool, life-giving gas for their own use. Both our Milky Way Galaxy and the Andromeda Galaxy are active and happily producing stars… for now. But who knows what could happen in the very distant future? Both galaxies should be ready to watch their backs… or at least, their gas supply.