Why Does Bright Light Make Me Sneeze?

Short answer: It might be all in your head. 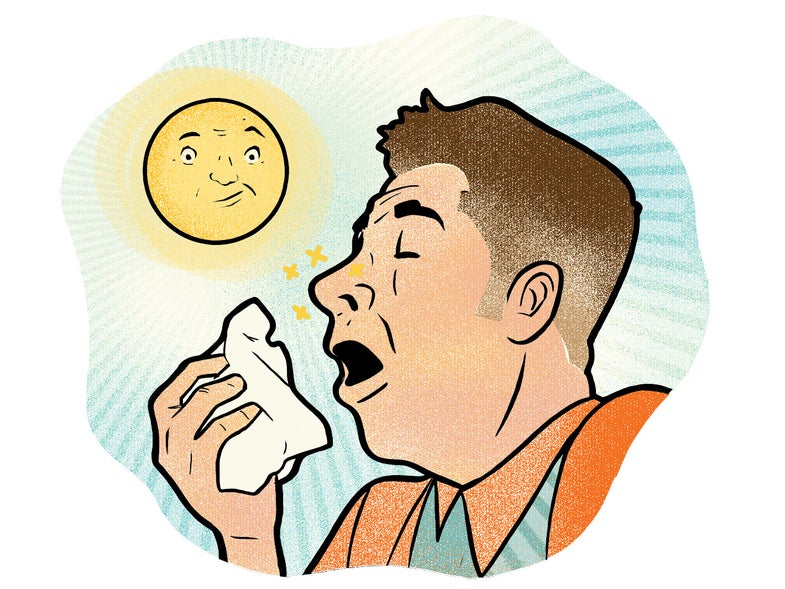 Perhaps as many as a quarter of us sneeze when we look at a bright light, a condition scientists have been calling “photic sneeze reflex” since 1954. But the condition goes back millennia. Aristotle proposed that the sun’s heat dries nasal fluid, causing the nose to tingle. (The ancient Greeks also suggested sneezing is divine and should occur only during sexual excitement.) Modern science has put forth a few more likely explanations.

For starters, the effect has been observed in babies, so it’s probably not a learned response—but it could be genetic. One Swedish study found that in families where one parent had the condition, more than half of the children had it too. A separate research team even found two places in the human genome where the trait might reside, though they’ve yet to prove it.

On a mechanistic level, the condition might result from crossed signals in the brain’s wiring. Scientists have speculated that intense activation of the optic nerve, such as you’d get from stepping into bright sunlight, could leak into the nearby trigeminal nerve, which responds to nasal irritation—thus triggering the sneeze.

Or the cause might lie elsewhere in the brain. A few years ago, researchers at the University of Zurich recruited 10 photic sneezers and 10 nonphotic sneezers to test another theory. They measured brain waves using electroencephalogram (EEG) while flashing bright lights at their subjects. The photic sneezers displayed more activation in their visual cortices, suggesting that this extra sensitivity to light extends this reflexive process beyond the brainstem.