Wine Tasting Not For You? Try Honey Tasting

The best honey probably doesn't come in a plastic bear 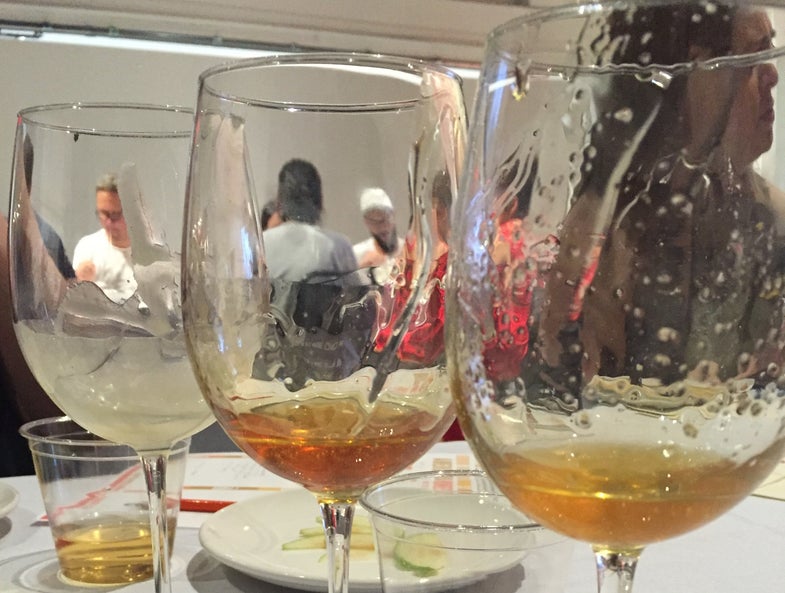 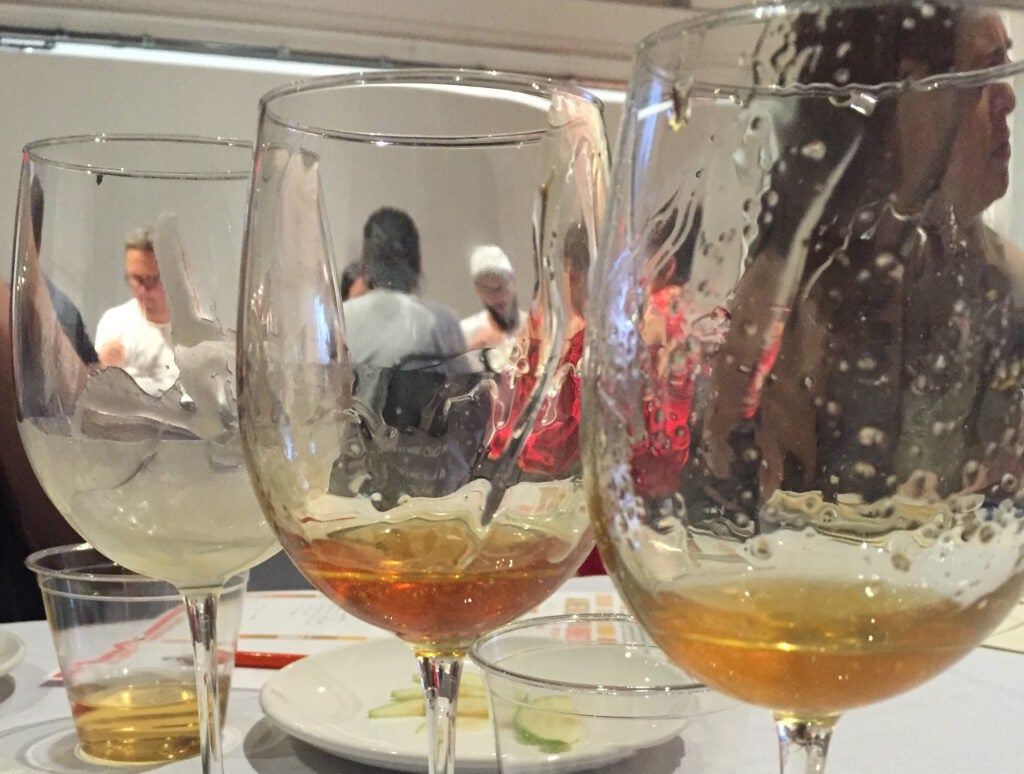 Honey tasting is a lot like wine tasting, except you have to scoop the honey out with a paper spoon.

Inside a lofty brick building on a quiet Brooklyn street, thirty of us sat around a horseshoe-shaped table with plates of grapes, almonds, bread, and pungent, sweaty cheese. Between every group of four sat six wine glasses, which we held to the light and shoved our noses into, like you would at any wine tasting. Except instead of wine, these glasses were full of honey. By the end of the night, I decided I much prefer honey tastings, if we’re going to be honest.

Carla Marina Marchese, a veteran beekeeper who founded the American Honey Tasting Society, walked the group through A Sensory Tasting of Single-Origin Honey at the Museum of Food and Drink Lab in Williamsburg, Brooklyn last night. Marchese, who is the only American resident to be certified by L’Albo degli Esperti in Analisi Sensoriale del Miele (The Italian National Registry of Experts in the Sensory Analysis of Honey), calls herself a “Honey Sommelier,” literally a wine taster—but for honey. 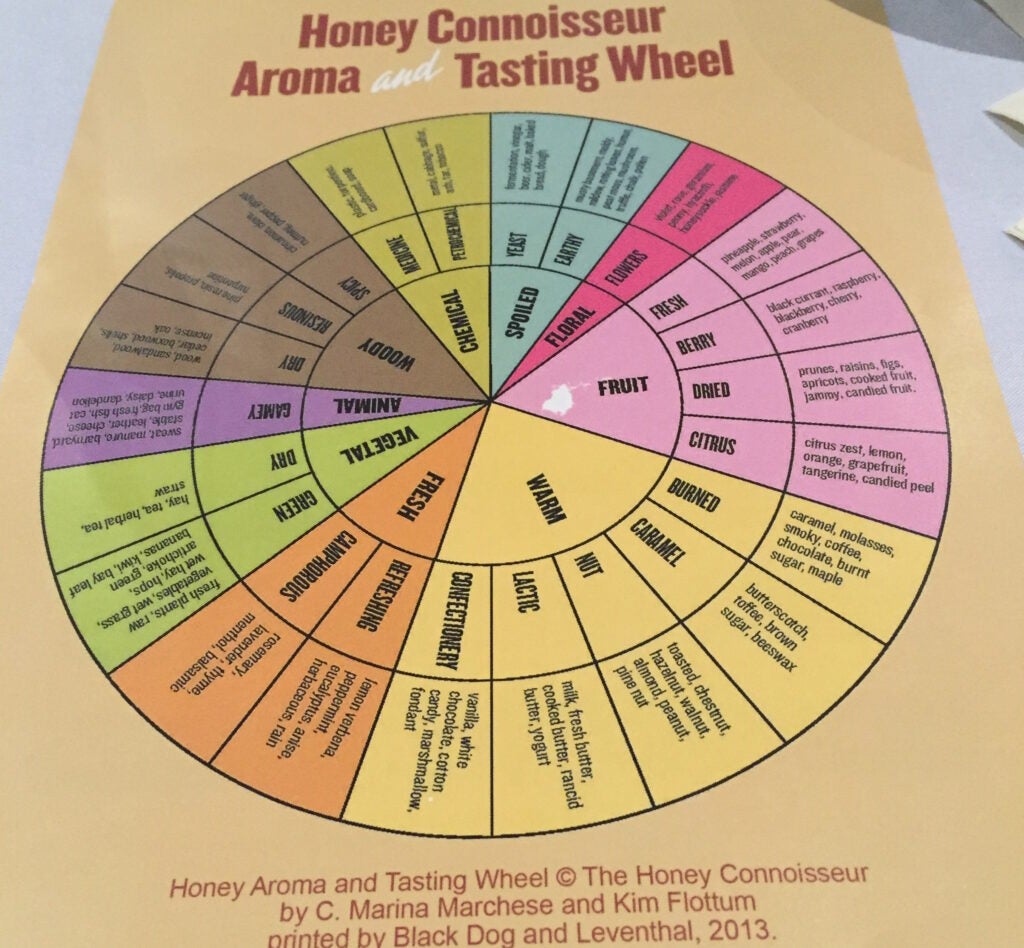 We all received a copy of Marchese’s flavor wheel, which she passed out at the event.

Honey is a tough substance to become an expert taster in; there are more things that can change the taste than in both olive oil and wine. “There are so many different flowers bees are gathering from,” Marchese told Popular Science. “You have so many variables. I think, more than any other artisan food.”

Honeybees make honey by collecting flower nectar and bringing it back to their hives. Once there, they partially digest it and essentially vomit it into honeycombs, where they can store the sweet treat for later. Honey is about 17 to 18 percent water and the rest is mostly the simplest sugars, glucose and fructose, and some more complex sugars like maltose or sucrose. There are also some tiny traces of other compounds which are specific to the plant that the bee took the nectar from—and that’s where the flavor differences come in.

If a beekeeper let her bees roam free in an orange blossom field, the bees would bring back mostly orange blossom nectar, and the honey would have a citrusy taste. Other plants, like linden trees, blueberries, or even avocados, can also add specific tastes and colors to honey, but so too can the soil or location where the plants grew. Wine fans are probably familiar with the idea of “terroir,” that wines can taste different based on where the grapes were grown. Honey works the same way.

At the event, we all received a flavor wheel created by Marchese and BeeCulture.com author and editor Kim Flottum, and a guide with the official colors of honey to help us describe what we were tasting. In order to taste the honey, we first needed to spread it around the inside of the cup to release the scent, take a whiff, then scoop it out onto cheese, bread, or straight into our mouths. The first honey I tried just tasted like honey, though I wrote “fruity” and “citrus” because that’s how Marchese told us the linden honey should taste. By honey number five, which was a thick, dark amber goop, I felt like I got the hang of it. I tasted something akin to a musty basement or a taxidermy shop; Marchese said this buckwheat honey should taste like “leather” or “barnyard.” Pretty much the same. 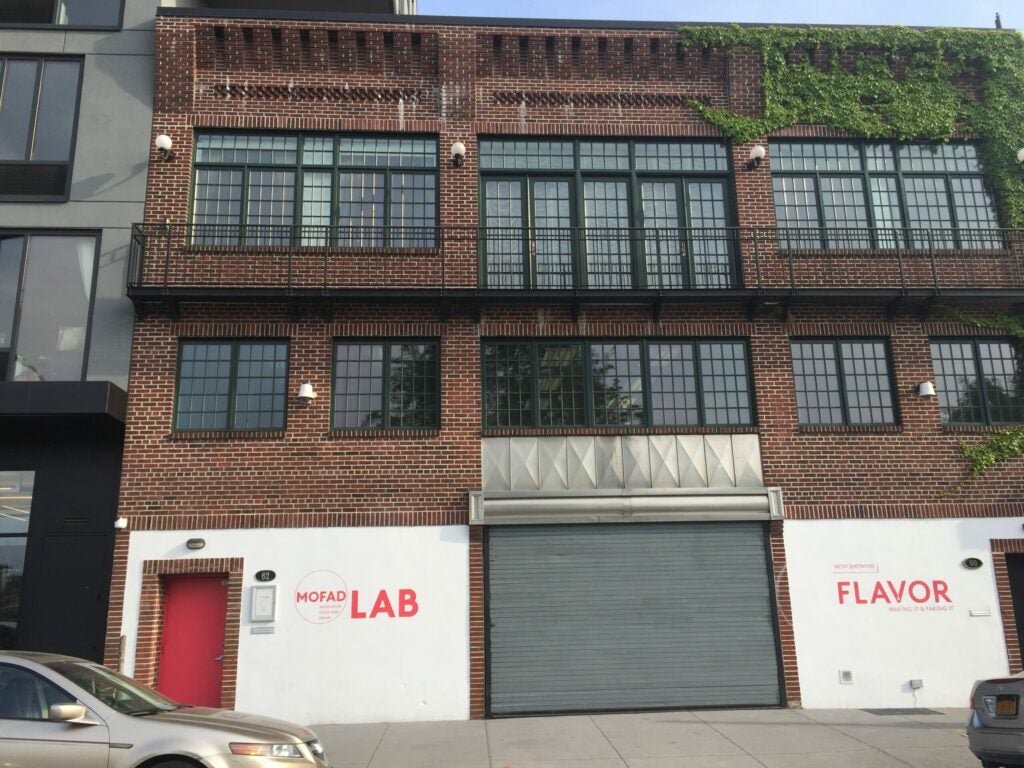 The Museum of Food and Drink in Brooklyn, New York

Events like Marina’s are important, Amina Harris, director of the Honey and Pollination Center at UC Davis’ Robert Mondavi Institute for Food and Wine Science, told Popular Science. They help people appreciate honey, honeybees, and where our food comes from. Lots of the honey on supermarket shelves contain a blend of different honeys, but might still claim a specific origin. If a honey was 27 percent orange blossom honey, 25 percent alfalfa, 25 percent cotton and 23 percent wildflower, a honey salesperson might still label it as orange blossom.

“[Marina] is opening people’s eyes,” said Harris. Programs like Marina’s give folks a benchmark so the next time they taste a specific honey, they can tell whether they’re getting the real thing. Harris runs honey tasting programs at UC Davis, where tasters and experts together created another honey flavor wheel. It has 99 words that make up its spokes.

By the end of the class, I was spilling spoonfuls into my mouth and onto my pants looking for the slightest differences, trying to figure out the names for all of the flavors I was experiencing. But these honeys were nothing like the weirdest one Marchese had ever tried.

“The craziest honey … is corbezzolo honey,” Marchese told Popular Science. “It tastes like hot peppers and licking an ashtray.”