The World Looks Bigger Through A Virtual Child’s Eyes

A virtual reality experiment that put adults in a virtual 4-year-old's body found changes in perception. 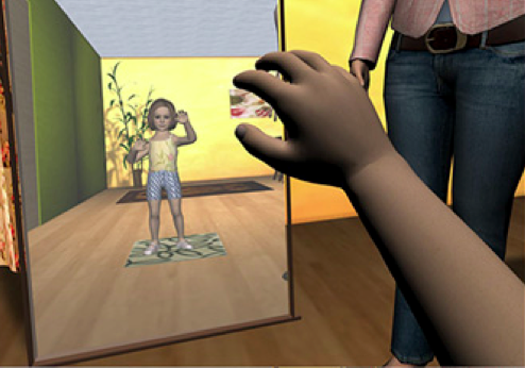 To a four-year-old, the world is a pretty big place. Once we grow up, the playgrounds and classrooms of our childhood no longer seem as towering as they appear in our memories. The childish overestimation of the world around us isn’t just a result of short stature, though.

A new study led by University of Barcelona computer scientist Mel Slater finds that when adults are placed into a child’s body, they think objects are much larger than they would as adults, even tiny adults viewing the world from the same vantage point.

The study immersed 30 adults in a virtual reality experience to test how their perspective altered their perception of objects’ size. The adults saw themselves, through a first person perspective and in a mirror, in a toddler’s body. When the participants moved their real body, the virtual child moved too, giving them the illusion of bodily ownership. At a different point, they explored the same virtual reality setting in an adult avatar that was scaled down to the same size as a 4-year-old.

Participants experienced the illusion of bodily ownership equally regardless of whether it was a child’s body or a scaled-down adult’s body.

To test perception, the study subjects estimated how big three different-sized cubes were while immersed in the virtual scenario. Though both groups overestimated the cubes’ sizes, when they were seeing themselves in the child’s body participants overestimated the size of the boxes much more. They perceived the cubes as being about twice as large as they felt they were from the adult vantage point. 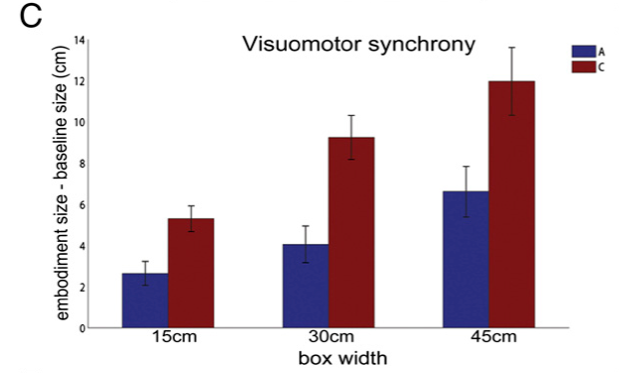 A second experiment tested the same conditions, but with a decreased sense of ownership. The virtual bodies moved on their own, separate from the movements of the participants, breaking the illusion. The participants overestimated sizes, but there wasn’t a significant difference in this case between the adult body and the child’s body.

“[A]s well as body size influencing the estimation of the sizes of objects in the environment, there must be an additional underlying mechanism relating to perception of the form of the own body,” the researchers write. “The findings support the notion that higher-level cognitive processes (i.e., the implications of the form of the body in terms of how it represents age) can influence our perceptual interpretation of sizes of objects in the external world other than body size alone.”

The study is published in Proceedings of the National Academy of Sciences this week.