Hubble Catches The Comet ISON Hurtling Toward The Sun 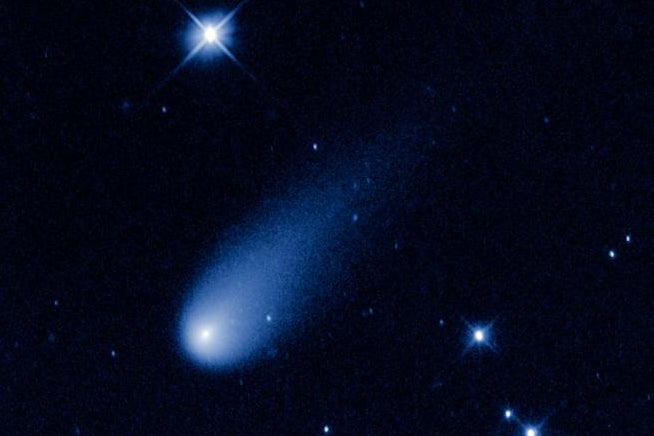 Fourth of July is the perfect time to watch fiery masses streak across the sky. This speedy guy, the comet ISON, looks like it pretty much fits that bill. Except that it’s actually quite icy at its core, and it’s barreling toward the sun at around 48,000 miles per hour, faster than any firework.

This five-second loop of video is a compression of images taken by the Hubble Space Telescope over a period of 43 minutes in May, during which ISON covered 34,000 miles.

At the time, the comet was between the orbits of Mars and Jupiter, 403 million miles away. As it approaches the sun, it will warm up, and its tail of gas and dust will grow longer as the ice of its nucleus sublimates more quickly. It’ll get brighter, and we should be able to see it jaunt across the sky with the naked eye by sometime in November.