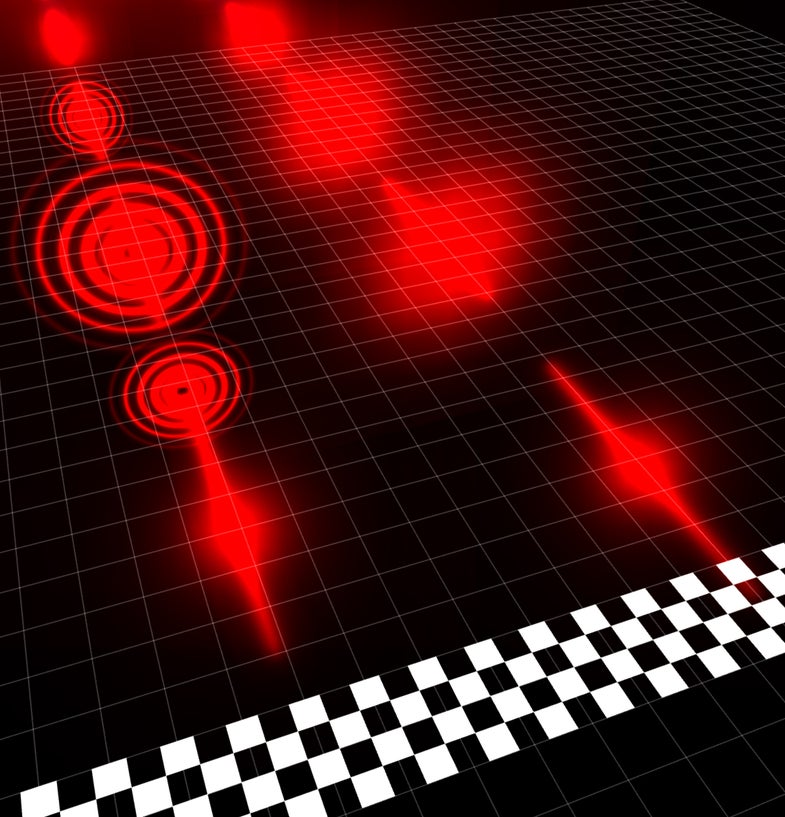 Two photons, or particles of light approach a finish line used to determine if light can travel at different speeds through the air. Illustration courtesy University of Glasgow
SHARE

Light passes through air at about 299,000,000 meters per second, an accepted constant that hasn’t been challenged—until now. By manipulating a single particle of light as it passed through free space, researchers have found a way to slow down the speed of light through air.

Scientists have known for a while how fast light passes through different mediums, such as water or glass, and how to slow that speed down. But researchers at the University of Glasgow and Heriot-Watt University decided to take this concept further and see if the speed of light could be changed as it passes through gases.

To make that happen, the team decided to look at individual light particles, or photons. “Measuring with single photons is the cleanest experiment you can get,” Jacquiline Romero, one of the study’s lead authors and a physics professor at the University of Glasgow, tells Popular Science. The group wanted to explicitly establish that different photons have different velocities depending on their placement within a light beam’s structure. Depending on where a photon is in a light beam, it has either a slower or faster relative speed. It’s similar to a group of runners: Even as the group stays together, the one at the front has to constantly be moving faster than the ones at the side or in the back. Daniel Giovannini, another study lead author from the University of Glasgow, says that researchers have known this for a while, but the team wanted to know just how slow the photons in the ‘back of the pack’ are moving.

The experiment set out to measure the arrival times of single photons, Romero says. To do that, the researchers passed one photon through a filter, which changed the photon’s structure. They then compared the velocity of this photon to an unstructured photon. The researchers were able to decrease the velocity of the structured photon through air by 0.001 percent, which seems quite small, but the amount was not accidental. “We had to try it out and convince ourselves that it can be done and that it’s real,” Giovannini says. He and Romero say they anticipate the results will be divisive, between people who think the conclusion is obvious and those who think it’s a groundbreaking experiment.

The study was published January 23 in Science Express. Next, Romero says, they want to conduct the experiment using a camera and classical light rather than single photons. The team also hopes to extend their findings to sound waves as well. As far as practical applications go, Romero says the effect of the study will mostly be felt in the use of microscope optics.