What's next for the Zaporizhzhia Nuclear Power Plant? 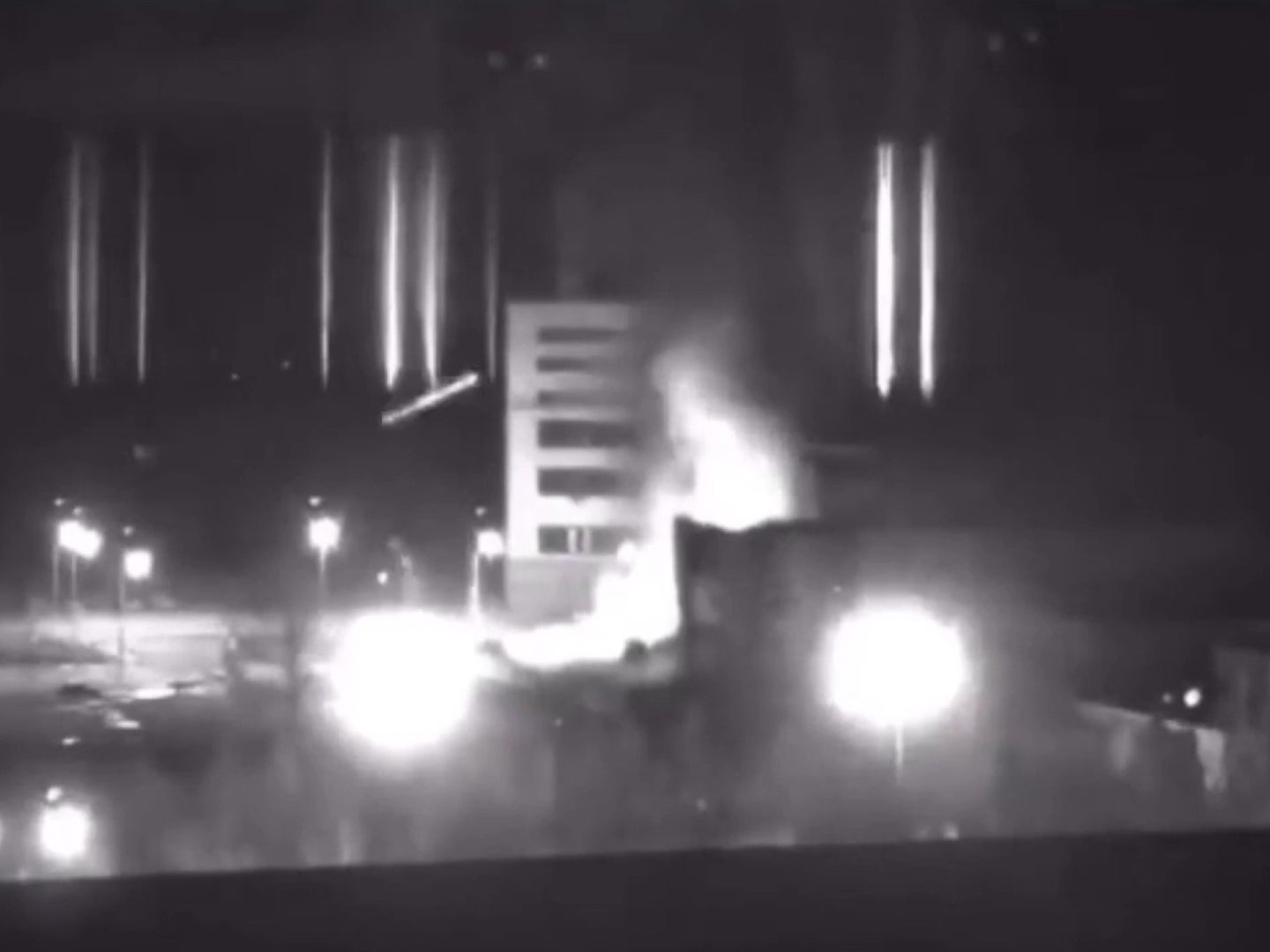 A screen grab captured from a video shows a view of Zaporizhzhia nuclear power plant during a fire following clashes around the site in Zaporizhzhia, Ukraine on March 4, 2022. Zaporizhzhia Nuclear Power Plant/Anadolu Agency via Getty Images
SHARE

This story was published in partnership with The Center for Public Integrity. This is the first in a 10-part series on nuclear risk, military technology, and the future of warfare in light of Russia’s invasion of Ukraine.

On the night of March 3, more than 4 million people watched a livestream of security camera footage from the Zaporizhzhia Nuclear Power Plant. Located along the southern bank of the Dnieper River, the six reactors at Zaporizhzhia constitute the largest nuclear power plant in Europe. Bright flashes illuminated columns of armored vehicles, which were otherwise muted against the grayscale footage.

Before the invasion, Ukraine derived nearly half its electrical power from nuclear power plants, and of that, nearly half the capacity comes from Zaporizhzhia. With the reactor held by Russian forces and cities like Mariupol under siege from Russian forces, Zaporizhzhia’s capture stands as both a first in the history of warfare, and as part of a much longer pattern: the denial of electrical power to countries under invasion.

During the attack, a projectile hit a training building on the powerplant campus, setting it on fire. The reactors remained unharmed and the fire was later extinguished. By the morning of March 4, the site was reportedly under Russian control, with a Ukrainian authority claiming the management of the facility was operating under gunpoint.

In the early hours of March 4,  the plant “became the first operating civil nuclear power plant to come under armed attack,” the World Nuclear Association declared in a statement, going on to note that “The Additional Protocol of 1979 to the Geneva Conventions contains in Article 56 a provision stating that nuclear power plants ‘shall not be made the object of attack, even where these objects are military objectives, if such an attack may cause the release of dangerous forces and consequent severe losses among the civilian population.’”

When it fell, Zaporizhzhia became the second nuclear power plant captured by Russia since the invasion began. A week earlier,on February 24, Russian forces had captured Chernobyl (“Chornobyl,” in Ukrainian), the long since decommissioned site of the infamous nuclear reactor disaster. Chernobyl last produced electricity in the year 2000, but the site is still staffed to manage the work of decommissioning, like sustaining cooling pools for spent fuel rods.

“Regarding reports earlier today of higher radiation measurements at the Chornobyl site,” the International Atomic Energy Agency said in a Feb. 25 release, “Ukraine’s regulatory authority said that they may have been caused by heavy military vehicles stirring up soil still contaminated from the 1986 accident.”

The same geographic concerns that situated Chernobyl along the Pripyat River north of Kyiv also suggests why so many tanks and military vehicles had driven by: It’s a relatively cleared, dry area along a highway north of the capital, a traversable break from the surrounding marshlands. Kyiv remains a pivotal objective of Russian forces in the war, and the road through Chernobyl is one of the most direct paths for forces aiming to encircle the city.

Even decommissioned, important work continues at Chernobyl, like the safe monitoring of cooling pools for spent fuel. A loss of power to the site, reported by Ukraine’s minister of foreign affairs Dmytro Kuleba, could threaten its operation, though the cooling pools should maintain an effective temperature for weeks or months, depending on the estimate. The IAEA noted that the lack of power is also a strain on the staff and guards working in captivity at the facility.

But Zaporizhzhia, a live reactor complex located between Russia’s Crimean holdings and its advancing forces from the declared Donetsk and Luhansk republics, presents a much more striking security challenge than the inactive Chernobyl. Managing the safety of a nuclear power plant requires technical skill and the ability to properly and thoroughly follow safety procedures. Doing so under hostile military occupation, while that same military is responsible for attacks on the country, might make such safety procedures impossible, and difficult to verify.

“According to reports, the situation at occupied power plants is bad and getting worse. Plant managers need to get approval for any actions, including those related to reactor operations,” writes Nickolas Roth of the Nuclear Threat Initiative, a U.S.-based nonprofit aimed at reducing nuclear and biological threats. “Ukraine’s nuclear regulator has said it is now having problems communicating with staff at Zaporizhzhya as phone lines, emails, and fax machines are no longer operating.”

Only one of the reactors at Zaporizhzhia was operational at the time of the attack, thanks to regular maintenance outages, controlled shutdowns, and reserve operation. Reactors are designed to withstand many kinds of powerful impacts, like storms and even airliner crashes, so it remains unlikely that an errant shell from a battle would be catastrophic.

Instead, a deeper concern from the hostile occupation of Zaporizhzhia is that merely being held in Russian hands will lead to denying electricity to civilians in the country. Invading militaries have destroyed or captured power plants before, but never one like this. It’s a grim signal, as Russia’s invasion moves from first forays to grinding sieges.