Why a tech giant is embracing old-school magnetic tape storage

IBM believes that tape technology will continue to be valuable for modern companies. 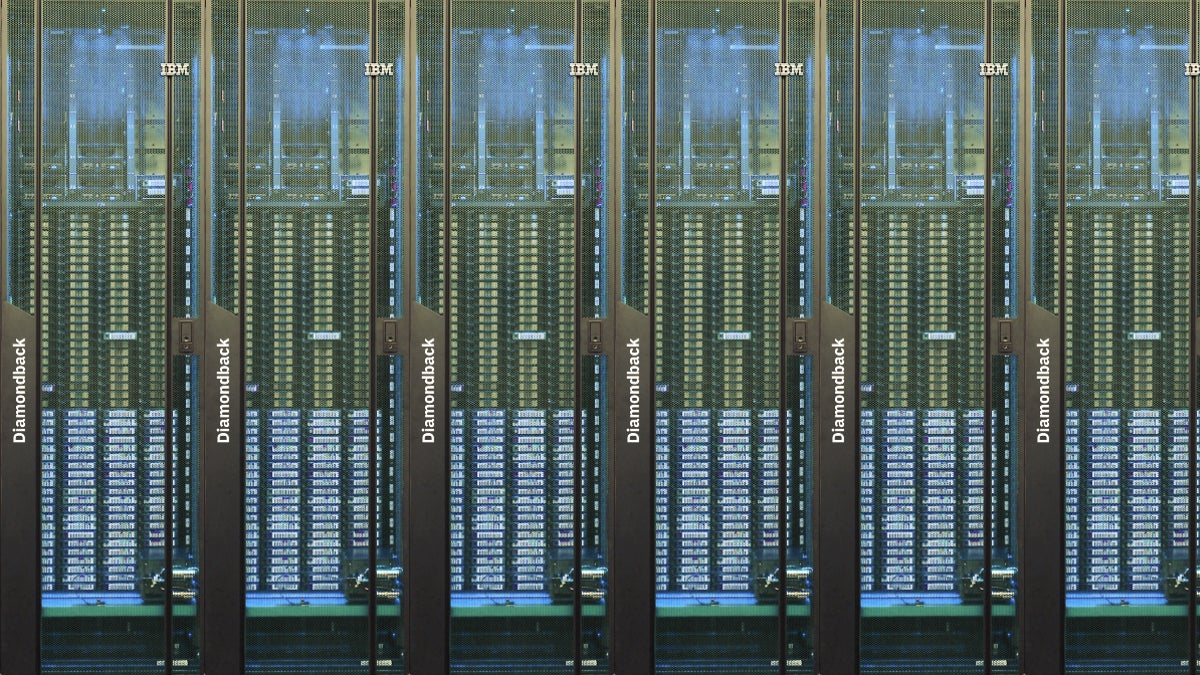 This week, IBM introduced the Diamondback Tape Library, reaffirming its position that magnetic tape is a form of data storage that’s here to stay. Yes, magnetic tape, kind of like what’s spooled inside the VHS tapes and cassettes of last century.

“Tape has been known to live in the middle of the desert for 40 years and still be recoverable,” says Shawn Brume, IBM’s storage strategist. “In 2010, the health of tape was really understood when all of the data used for [the Nimbus satellite project] were recovered from tapes that were at that time, 46-years-old.”

IBM argues that this feature makes tape the ideal medium to store archival data that doesn’t need to be frequently accessed. Tape can also serve as an “air gap” backup—offline versions of important or sensitive files that are resistant to cyberattacks. The types of data that stay on tape span financial records, medical records, personally identifiable information, and documents that are part of a legal hold, Brume notes.

In addition to offering protection against ever-evolving cyber threats, it’s also more conservative with power use. “Tape uses no energy with data at rest. Even when it’s drawing files back, it’s doing it with very little energy because it’s not trying to do it in a high-performance manner,” Brume says.

The specs of IBM’s tapes

So what can magnetic tape do?

A single tape is about 3 inches by 3 inches, and 3/4 of an inch thick. It’s smaller than a hard disk drive (HDD), but weighs about 0.6 kilograms (roughly a bit more than a pound). One cartridge can store 18 terabytes of data uncompressed, and 45 terabytes compressed. IBM is working on doubling this capacity in the next generation of the technology.

A library of tapes can range in size from something you can put on your desk to something that’s the size of a small refrigerator (about 8 square feet). The small refrigerator-sized library can hold 1,584 cartridges. IBM touts that its Diamondback Library will be the densest tape library on the market. It will be able to hold 69 petabytes of information while taking up less than 8-square-feet of space.

“You get one stream of data out of one tape drive, you access the data, you have to wait a little while but it’s still coming back to you pretty fast: 1,000 megabits per second, compressed,” says Brume.

How tape matches up to other storage tech

In a highly digital world, tape is one of only technologies that uses analog signals to move part of the data, Brume says. “At its fundamental, tape is a lot like HDD. It uses magnetic-based materials. But in this case, tape is literally an underlayment of material [usually nylon] that has magnetic coating on it. And rather than a spinning disk, the tape comes in, it’s threaded. It can look like a VHS tape, but it’s much more robust.”

The tape moves linearly into the tape drive and out into the tape cartridge. To write, the tape head takes electronic signals and creates a mini magnetic field that can change the polarity of the material on the film to make a pattern of zeros and ones. Once data is written on tape, it can’t be changed (but it can be erased and rewritten).

“The immutability and encryption capabilities of LTO tape [an open standards magnetic tape data storage technology], as well as the simplicity of creating an ‘air gap’ (removing the tape and storing it a vault) makes tape a key weapon in assuring data survival in the face of ransomware,” says Phil Goodwin, research vice president of infrastructure software platforms at IDC, an IT market intelligence firm.

HDD writes data not in linear paths, but in concentric, circular paths. This means that with HDD, the head can easily be moved to a spot on the disk for easy data access, whereas with tape, that recall capacity is slower. “And certainly, we’re all slower than flash because flash is just electrons that have been charged up,” Brume notes.

However, the advantage of tape is that it never has to be charged up. “You can take the tape, you can set it on the shelf,” Brume says. “If you leave an HDD powered down for too long, the head ends up with goopy stuff on it, and then it just won’t write or read.”

Additionally, the integrity of data stored on tape doesn’t really deteriorate that much, even over long periods of time. “If you have a laptop and you have an HDD in it for a long time, you’ll notice when it comes off it’s really slow,” says Brume. “We don’t have that problem with tapes. Tapes are designed to not be accessed.”

Despite its benefits, Brume believes that tape, HDD, and more speculative forms of data storage, such as DNA, all have their own place in the technology ecosystem. That belief is echoed by some experts in the field.

“The message about tape is that, just as SSDs did not displace HDDs, HDDs, in turn will not displace tape systems. All of them co-exist in a tiered storage architecture where cost and latency are balanced at every level of the system,” says Bain. “As data centers grow, these tiered approaches make more sense to implement because the financial stakes become higher.”

[Related: Can these government efforts crack the code for DNA storage?]

The IBM tape team is part of the DNA storage alliance. “We’re very much into it because it represents another tier. It’s just like the difference between HDD and tape. HDD is faster than tape, and if you read the technology on DNA, you’re talking about 2 megabits per second,” Brume says. “But if you need to keep the data, and you want multiple copies, and it doesn’t matter how fast you’re going to get it back, but you need to retain it in perpetuity, DNA is going to be a great choice in the future because it’s very open. We understand it very well. We know how to map it out.”

And for the innovators of using laser etching on glass discs for data storage, Brume says that they still have to contend with the challenges around creating cooling environments for the lasers, and the amount of power and the laser required.

To Bain, although competing technologies like holographic or burned glass or DNA are interesting, he believes that there are still some kinks that need to be worked out first. “Things like DNA are extremely appealing because the densities they can achieve are potentially so high,” he says. “However, a host of other issues must be addressed in any storage system like reading and writing mechanisms, latencies, robustness, error correction and redundancy, etc.”

What companies are still using tape in their operations

Hyper-scales—companies that have grown so large that they’re offering their own infrastructures, or have massive data as a result of their infrastructure—always need many different forms of technology to handle the variety of data that come into their systems to power a range of services.

These are organizations like CERN, as well as corporations like Amazon, Google, Meta, Baidu, Alibaba, and Tencent.

“Magnetic tape beats hard disk and flash on longevity, financial cost, and carbon footprint cost, but loses out on access speed,” says Johnny Yu, a research manager at IDC. “You won’t want to put live production data or even backups on tape, but it’s perfect for any infrequently accessed data that needs to be retained for a very long time such as medical records or archival data.”

Christophe Bertrand, practice director of data management and analytics at IT analytics firm ESG, notes that there is no shortage of data. “Tape is a unique medium that allows a ton of data to be stored relatively quickly,” he says. And new use cases for these kinds of valuable but infrequently accessed data, like rendering systems, analytics, models and simulations, are always emerging.

As enterprises push for vendors to meet sustainability requirements, tape is becoming more popular because of its low power consumption and its recyclability, Bertrand says. In the long run, tape will surely see more competition in the space, he notes, “but how long will it take for this new tech to be mature, and be at a scale and price point that makes sense?”