How To Turn An AK-47 Into A Soup Ladle

A DIY metaphor for peace 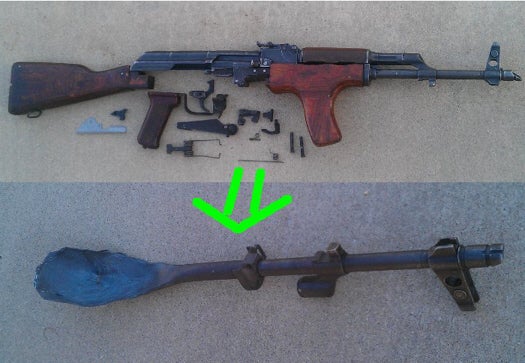 Changing swords into plowshares and spears into pruning-hooks is an ancient metaphor for turning away from violence and toward peaceful labor. Mike Izbicki, a former Navy midshipman who in 2011 was discharged from service as a conscientious objector, has created a modern-day, literal interpretation of the analogy. He recently transformed an AK-47 that had been used by the Romanian army during the Cold War into a (rather heavy) serving ladle. Here’s how he did it:

1. Disassemble the gun: Assault rifles are filled with interlocking parts, many of which don’t lend themselves particularly well to reforging. Izbicki took just the metal barrel assembly for his ladle.

2. Set up the anvil: When not busy falling on cartoon character’s heads, an anvil serves a vital purpose in metalwork by providing a strong, hard surface against which metal can be shaped by hammer blows. Izbicki purchased an anvil and 5-lb hammer online for $80.

3. Make a forge: Izbicki stacked cinderblocks on top of a large propane stove burner to create his forge. Temperatures inside the cinderblock chamber rose above 2,000 degrees Fahreinheit.

4. Hammer time: Once the metal gun barrel was red-hot from the furnace, Izbicki hammered it against the anvil to change its shape from gun-like to mess-like.

5. Hammers, part two: After removing extra caked-on metal with pliers, the next step was shaping the flattened barrel into a rounded body that could hold liquid. Izbicki accomplished this by hammering the spatula-like shape at an angle.

6. Don’t eat with it: Even if the barrel turns into a perfectly smooth and liquid-bearing spoon, this tool should not be used with real food. A gun that’s been fired has gunpowder residue on it, which is full of lead and can cause adverse health effects when inhaled or ingested.

Of course, the point of this project was to render the gun useless, not to create a practical utensil. It isn’t plowshares or prune hooks, but it is one less gun.