How It Works: The Robotic Chicken Butcher

If you’ve ever wondered how boneless chicken parts end up that way, take a peek inside one of the 4,000... 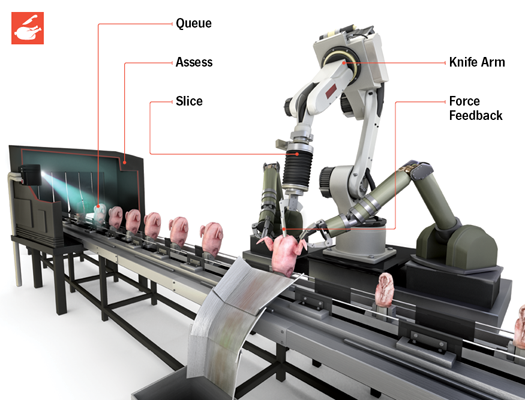 If you’ve ever wondered how boneless chicken parts end up that way, take a peek inside one of the 4,000 or so poultry processing plants in the U.S. Workers man massive assembly lines to scald, pluck, gut, slice, and wrap an estimated nine billion birds annually.

Unsurprisingly, work in poultry plants is dirty and dangerous. The job of chicken deboner (who cuts through the shoulder joint to separate the wing from the body) is particularly brutal since it requires performing repetitive motions with a knife for hours on end in a room the temperature of a refrigerator. If ever there was a job for a robot, this is it. But teaching a machine to carve poultry is difficult. No two chickens are the same, and each cut must be perfect. If a robot splinters a bone, it contaminates the meat. If it leaves too much flesh behind, it costs its owner money.

Later this year, a team from the Geor­gia Tech Research Institute in Atlanta will put the finishing touches on an autonomous robotic chicken butcher. The Intelligent Deboning System, a one-armed knife-wielding automaton, has the brains and dexterity to debone a bird in four seconds flat, on par with a human butcher. 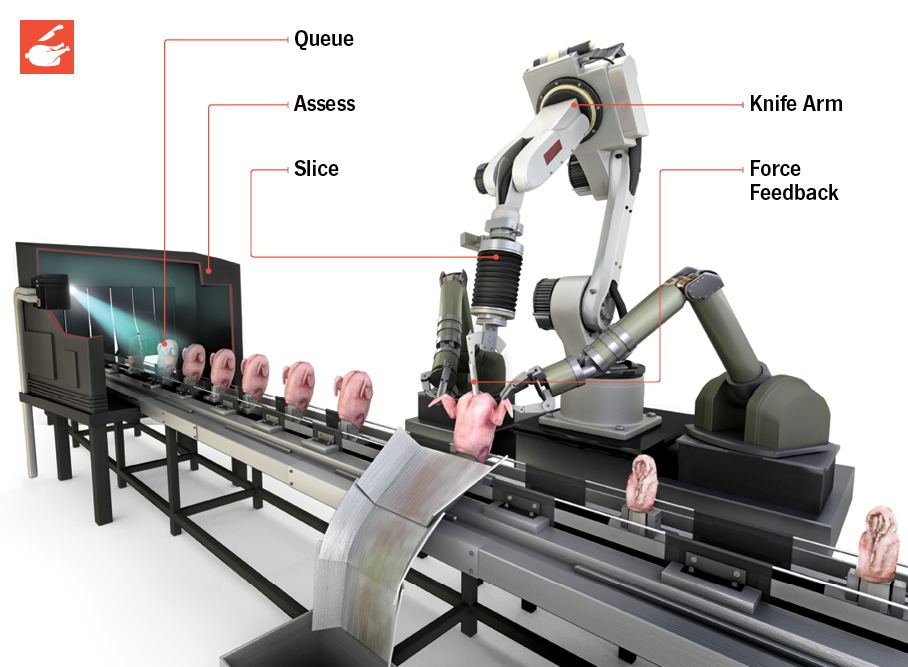 1) Queue
Gutted whole chickens sit on metal cones as they travel along a conveyor belt, just as they would in a conventional poultry factory.

2) Assess
Each chicken passes through a kind of photo booth. Inside, two pairs of stereo cameras scan the bird, one pair per side. A computer instantly renders the images into a 3-D map of the bird. It also identifies useful markers, such as the humerus and the coracoid bones.

3) Calculate (Not shown in illustration)
In a production model that the Georgia Tech researchers plan to build, two robotic arms work on opposite sides of the conveyor belt—one arm for each side of the bird. Equipped with a 3-D map of the incoming chicken, the robots calculate a cutting trajectory accurate to within three millimeters. Fortunately, the body proportions of a chicken adhere to quantifiable standards. So by calculating the dimensions of one body region the machines can deduce the dimensions of all the other body parts.

4) Slice
To remove the wings from the breast meat, the robotic arms slice into the chicken with a knife at the collarbone, move toward the shoulder, cut through the shoulder joint, and continue down the bird’s backside along the shoulder blade, all in two seconds.

Knife Arm
The business end of the robot is an industrial arm similar to those used to weld and paint car parts. The prototype features six degrees of freedom (one less than a human arm) to make cuts as fluid and graceful as possible.

Force Feedback
A force-torque sensor on the tip of the knife imparts sensitivity to the blade. Because the arm can sense resistance, it can move the blade along the surface of the bone without slicing through it and can discern between meat, tendons, and ligaments. “The big challenge is teaching the robot to adjust its behavior in real time to account for all the variation in different birds,” says Ai-Ping Hu, senior research engineer at the Georgia Tech Research Institute. Force feedback is key to accomplishing this. Dull blade? The sensor knows that too and signals the robot to sharpen it.

Brain (Not shown in illustration)
To help the robot calculate the cutting path, algorithms compare 3-D maps of each chicken to a database of dozens of different body types. The machine also learns on the fly and gets smarter with each new chicken it carves.

Calculations per Second to Render a Map of the Bird: 1,000
Seconds it Takes to Calculate a Cut: 0.5
Seconds to Debone an Individual Bird: 2–4
Estimated Cost of Each Robot Butcher: $350,000
Pounds of Chicken Consumed per Capita in the U.S. Each Year: 84