DARPA's three-fingered artificial hand is great at grasping, but can't quite manipulate tools. 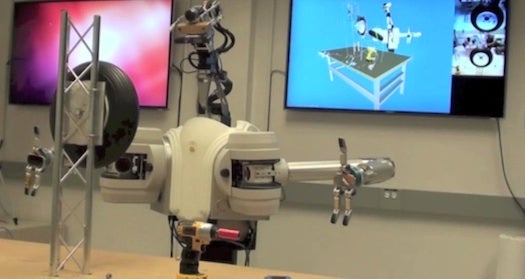 The U.S. Defense Advanced Research Projects Agency is working on making dexterous robot hands to search for explosive devices, use tools, provide amputees with helpful replacements, and maybe even change tires… but don’t get too excited about that one, yet.

The New York Times gave an overview of DARPA’s work into robot hands a few days ago, including a video of a robot that used a tool to take the nuts off of a tire, took the tire off of its bolts, and then put a new tire onto the bolts. Screwing the nuts back onto the bolts is still too difficult for the robot, but the robot’s developers are working on it, DARPA program manager Gill Pratt told the Times.

In general, the project has gotten to the point where its robots are great at visually recognizing and grabbing things like balls and rocks and tools, such as hammers. Sandia National Laboratories and the Massachusetts company iRobot have also worked to make the hands cheaper by reapportioning cellphone cameras and sensors for the hands. A hand could now cost less than $3,000, if made in quantities of 1,000 or greater. That’s already an improvement from last August, when Sandia announced it had made a grasping hand that cost $10,000.

Now the challenge is to get the hands to turn nuts and otherwise manipulate tools instead of just holding them. For example, the U.S. military wants robot hands that are able to unzip a suspicious piece of luggage and feel around for improvised explosive devices.

The military is also interested in shunting its research over to labs that develop prosthetic arms and hands for amputees.