MIT Will Map Your Relationships Using Your Metadata

Give MIT a little access to your Gmail, get a big graph of all your relationships! 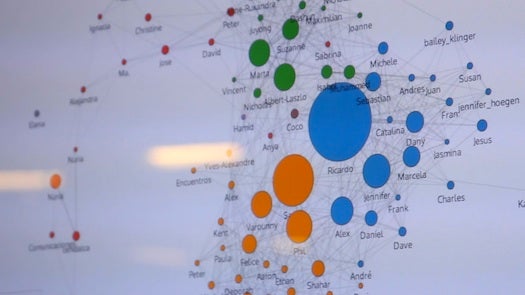 I’m dying to give three men I don’t know access to my email—the same, single email I use for reporting, banking, managing my student loans and writing to childhood penpals with whom I’d once exchanged paper letters—but, for now, they won’t let me. Their server is down.

I’m trying to test Immersion, a new project from MIT, but it seems they’re getting some heavy traffic right now. The Boston Globe profiled Immersion last week as a way of visualizing what kinds of information the U.S.’ National Security Agency might be able to glean from its tracking of email metadata.

An email’s metadata include everything you see in the headers, such as the recipient and timestamp of an email. Emails’ and other files’ metadata also include stuff you don’t see as immediately, such as IP addresses. Metadata don’t include the actual body of the email—the “Hey Kelly, how’s it going?” message that you type out—so the U.S. government has defended its surveillance of metadata by distinguishing it from “content” such as the message of an email. Nevertheless, experts could pick out many interesting facts from analyzing only metadata.

Once you give your authorization to Immersion, the program links to your Gmail account (it only works with Gmail) and reads only your email metadata, not your content. It then uses that metadata to construct a graphic to show you the people with whom you email.

In a video, Immersion’s creators, three researchers in MIT’s Media Lab, explain that you are able to reorganize your data in real time, to help you pick out different patterns. Immersion is even able to guess which of your correspondents know each other and how you met certain correspondents, the New York Times blogged.

Interestingly, Immersion’s focus on metadata rather than message contents help it work faster, the video said. It’s just less data to download. Immersion is able to take metadata from about 1,000 emails a minute.

Immersion doesn’t have your actual password, the video explains — it uses OAuth protocol to get limited access to your account. You are also able to ask Immersion to erase all it knows about your account at any time.

Sadly, you can’t try Immersion at the moment. If you go to the site, you can ask to get an email notification when it’s back up again.