A Buoy-Based Security System For Our Ports

About 40 percent of U.S. trade—some $1.4 trillion a year—passes through the country’s 360 ports and waterways. (The rest arrives... 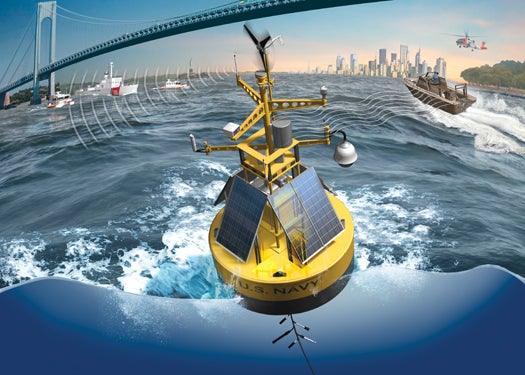 About 40 percent of U.S. trade—some $1.4 trillion a year—passes through the country’s 360 ports and waterways. (The rest arrives via truck, rail or plane.) And despite increased protection since 9/11, the U.S. Department of Homeland Security says that these ports remain especially vulnerable to attack from small vessels carrying improvised explosive devices, including radioactive dirty bombs.

The problem is that today’s radar and video-based systems have trouble accurately tracking small boats. Intellicheck Mobilisa, a wireless-technology firm in Port Townsend, Washington, is trying to address this vulnerability with the first buoy system that can communicate in real time to the shore. The system uses radiation detectors and video cameras to find and track potentially dangerous vessels. Each buoy also carries sensors that detect weather and water conditions for environmental research. And they do it all using primarily off-the-shelf technologies, which keep the cost at $100,000 each. That’s cheap, considering that just nine buoys could protect all of Washington State’s Puget Sound and the more than $80 billion worth of goods that travel through it each year. This month, the Navy will run the first full-scale demonstration of the system, tracking a vessel through 11 miles of the corridor that leads to Seattle.

HOW TO PROTECT A PORT

1. A small boat enters the area. The radiation sensor on the buoy closest to the craft detects a spike, indicating that the boat could be carrying a dirty bomb.

2. An onboard, off-the-shelf computer slightly larger than a laptop sends text messages and e-mails to coastguardsmen on shore informing them of the spike. The buoy examines patterns in shore-based radar to determine the ship’s location and points its camera in that direction. The camera also wakes up other buoys in the area, which start scanning for additional ships.

3. Using computers or smartphones, coastguardsmen take control of the system, using the buoys’ cameras to watch the suspicious vessel and survey the harbor. They review the video and audio recordings captured by the first buoy. If necessary, they can remotely steer the buoys closer to the ship to take additional radiation readings.

4. If coastguardsmen determine that they need to intercept the boat, speedboats and helicopters stop it before it reaches shore.