Millhauser imagines technologies that never were 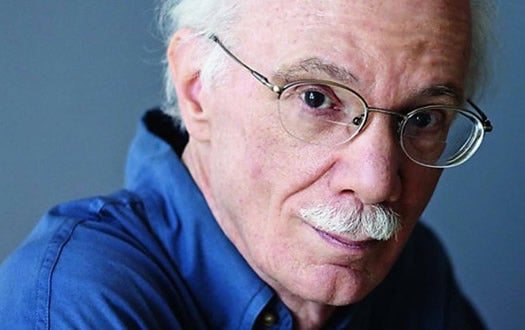 Many of Steven Millhauser’s best stories are wonders of historical futurism. He is interested in the road not taken, in what might have been, whether it’s a frighteningly interactive form of painting (“A Precursor of the Cinema”) or a bodysuit that simulates any tactile experience (“The Wizard of West Orange”). If you like steampunk or sci-fi, if you like Christopher Nolan or Rian Johnson–really, if you like PopSci–you owe it to yourself to check out Millhauser.

Millhauser is mostly known as a short story writer, though he won the 1997 Pulitzer Prize for his novel Martin Dressler: The Tale of an American Dreamer. Maybe his best-known short story is “Eisenheim the Illusionist,” about a Viennese magician, which was made into a movie called The Illusionist in 2006, starring Edward Norton. His pet themes are often contrasting; he writes tales of fantastic technological achievement in calming language, he mixes historical characters with completely fictional ones, he compares real inventions with those that only exist in his pages.

My favorite Millhauser story, the one that introduced me to his work, is “A Precursor of the Cinema,” which you can find in a couple of his short-story collections (Dangerous Laughter and the newish anthology We Others, available in paperback on September 4th). It imagines what the medium of moving images might have been if they weren’t, well, what they are, if that makes sense. Set in the mid-1800s, it’s the story of Harlan Crane, a painter who discovered through some unclear technology (new physical properties of paint? Tricky lighting? Shadow and live actors?) a way to create interactivity and motion in painting. Crane’s experiments move from the innocuous (a painted fly in a still-life appearing to emerge from the painting and fly around the viewer’s head) to the sinister and chaotic (a fantastic and disturbing late scene involves shadowy figures emerging from murals to dance with patrons).

Millhauser’s details and his tendency to insert real historical facts blur the line between real and not real. “A Precursor of the Cinema” casually references schools of painting, locations, other artists, new inventions, that may or may not have existed. You’ll find yourself Googling names and terms you read in his books–was there really a school of hyper-realist painters calling themselves the Verisimilists? Did Harlan Crane exist? The other story I mentioned, from the same collection, is “The Wizard of West Orange.” The “Wizard” is none other than Thomas Edison, and the story follows an abandoned invention called the haptograph, which can recreate the sense of touch–it can simulate a handshake, or the sensation of slipping into water, perfectly. It’s extraordinary and just plausible enough to make you long for it. Millhauser’s worlds are always just slightly out of reach.

That’s not to give the impression that Millhauser is simply a futurist; many of his stories have nothing to do with technology at all. But there are many that take technology and science into strange, carnivalesque alleys, with obsessive creators working on projects just beyond the understanding of the rest of us. You’ll like them.