A mathematics professor issued an urgent warning about football in 1894. America ignored him. 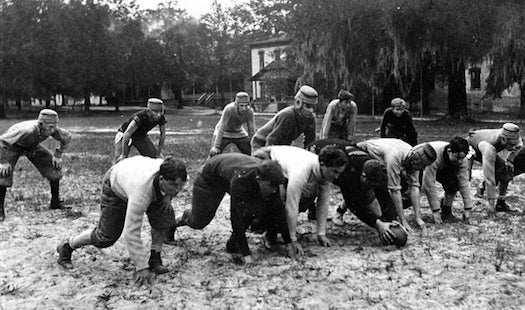 The National Football League recently put up $30 million to study the long-term effects of repeated brain injuries, after thousands of former players sued the organization for allegedly concealing the links between concussions and brain damage. Somewhere, the ghost of Yale University mathematics professor Eugene Lamb Richards is feeling mighty vindicated: In October 1894, he wrote a 13-page screed for Popular Science about how violence, greed, and unreasonable practice hours would abase the otherwise great sport of football.

As to the disadvantages of football, the sport is like everything else: it is subject to evils. The question is not whether there are evils attending the game, but whether the evils overbalance the good. I admit the evils, but I maintain that … they are not yet great enough to call for the abolition of the game.

Evil No. 2: Extravagance in expenditure of money earned. Undoubtedly every year much more money is spent than is necessary… it must be remembered that the age is extravagant; that more money is wasted in dress, in furniture, in all the vain show of living than was spent thirty years ago.

Evil No. 3: Brutality. The present style of mass play and momentum play puts a premium on weight and brute force. The mingling men in masses makes injuries more probably than in an open style of play.

Despite his (incredibly farsighted) judgement of the game’s flaws, Richards also believed that football had the potential to impart great “moral effects” on college lads:

If there is one virtue most to be desired in a manly character – without which, indeed, it ceases to be manly – that virtue is courage. And of the college sports there is not one which cultivates this manly virtue more than football.

Read the full story in our October 1894 issue: The Football Situation.