There’s a dancing koala bear running around this auditorium. One hell of a powerful fog machine is filling the room with smoke. And before long, a man is going to walk down the aisle playing a didgeridoo. But there’s no doubt that I’m in the right place. The guy wearing a varsity jacket that says “1337” on the back is one clue. Another is the massive cheer that envelops the room at the mention of the Higgs boson. “It’s been a good week to be a geek,” says the Australian comedian emcee-ing the Imagine Cup closing ceremony in Sydney. And I suppose it has.

The closing ceremony of Microsoft’s international student technology competition is a lot like the opening ceremony from five days ago: a lot of “change the world” talk, a dash of “children are our future” and the exact same playlist, though nobody seems to mind. Justin Bieber speaks equally to all nations. There’s even another “Oprah’s Favorite Things” moment. (The competitors are all getting a Windows 8 machine, when it comes out).

This time, though, there are winners. In the software design category, Team Quadsquad from Ukraine came out on top with their gloves that translate sign language into speech. A system of automatically dimming lights that save energy won second place, and the wi-GO, a Kinect-powered shopping cart that follows disabled users took third.

In game design, a band of furry creatures seeking to stop deforestation in Team Tang Thai’s game Verdant Fantasy won the Windows/Xbox category, while the Drexel Dragons from the U.S. took home the top prize for Windows Phone with their educational game Math Dash. Read more about the best winning projects in the gallery above.

The entrepreneur-friendly environment that is increasingly being cultivated at the Imagine Cup means that it’s not only in Microsoft’s long-term interest, but in the students and in ours as well. If these students go on to create technology businesses that are motivated by the desire to help people, rather than the desire to soak in bathtubs full of money, well, so much the better for all of us.

“These kids have unbounded energy and passion,” says S. Somasegar, Microsoft’s corporate vice president of the developer division. “Kids say ‘I can change the world,’ and whether they can or cannot, that raw energy serves them well.”

A popular question from the judges during teams’ final presentations was: “What have you learned at the Imagine Cup?” A lot of people just said something complimentary about the judges’ feedback. But one of the members of The Doers team from Brazil, who came in second place in Windows/Xbox game design for their Sim City-esque game about working together to develop a town, replied: “We learned that people can be very nice. That is not always the case.” 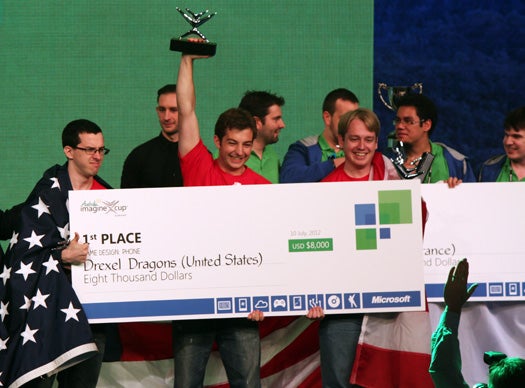 The games at the Imagine Cup are always fun, but they tend to focus more on raising awareness of problems than actually solving them. But this year’s winner of game design for Windows Phone, the Drexel Dragons from the U.S., wanted to create a game that actually made a difference in the area of one of the United Nations’ Millennium Development Goals. Of those, “education is the most suited to making a difference with a game,” says team member Matt Lesnak. They likened most educational games to “chocolate-covered broccoli,” saying they just try to sugarcoat learning, without actually using the game as an effective teaching tool. Their game, MathDash, aims to fix that. Numbers zip around the screen, and the user has to combine them to fill the equations at the bottom. Simple enough, but when you’re actually playing it and the numbers are bouncing all over the place, and the ones you need keep getting sucked into black holes and you can’t remember for the life of you what to add to 7 to make 12, it can be quite tricky. 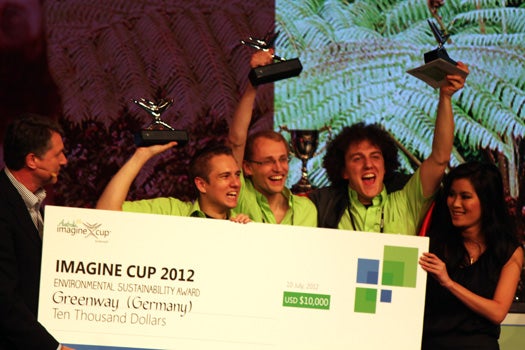 Team Greenway from Germany won the Environmental Sustainability Award with their navigation system, also called Greenway, that uses a distributed routing algorithm to spread traffic out across a city in such a way as to prevent traffic jams from ever occurring. Their simulations showed that traffic flow was twice as fast using their product as without. 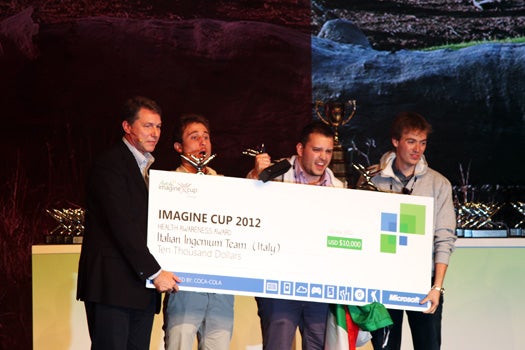 The Italian Ingenium Team’s Fifth Element Project is an interactive Kinect game that is customizable for individual children suffering from autism. The system then sends back information from these “motion-based educational experiences” to a therapist, through communication services and a web portal, who can then monitor the child’s therapy remotely. 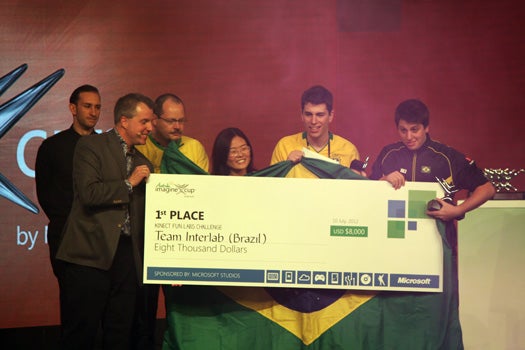 Team Interlab from Brazil created a program using the Kinect that lets users zoom, rotate and otherwise manipulate 3D objects on a screen. The team also included a time element in their Fusion 4D interface, to allow users to see what objects would look like at different stages in their evolution. The team hopes the tool can help supplement traditional teaching methods, and make students more motivated to learn. 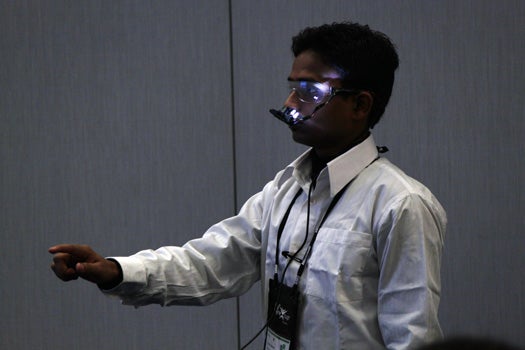 The D Labs from India developed their eponymous project to help kids with dyslexia improve their orientation and reading skills. Their group of Kinect-based games is customizable for each child, and includes things like picking the correctly spelled word out of a group of misspellings, and a Pong-like game that uses your hands as paddles. The team also developed their own eye-tracking hardware, with five to eight percent error, that records the user’s concentration levels (how long they are looking at a particular area of the screen) throughout the game, so parents can see where their kids are having difficulties. While The D Labs may not have impressed the judges enough to move into the final rounds of the software design competition, they made an impression on the online community, which voted them best of all the worldwide finalists in Sydney. 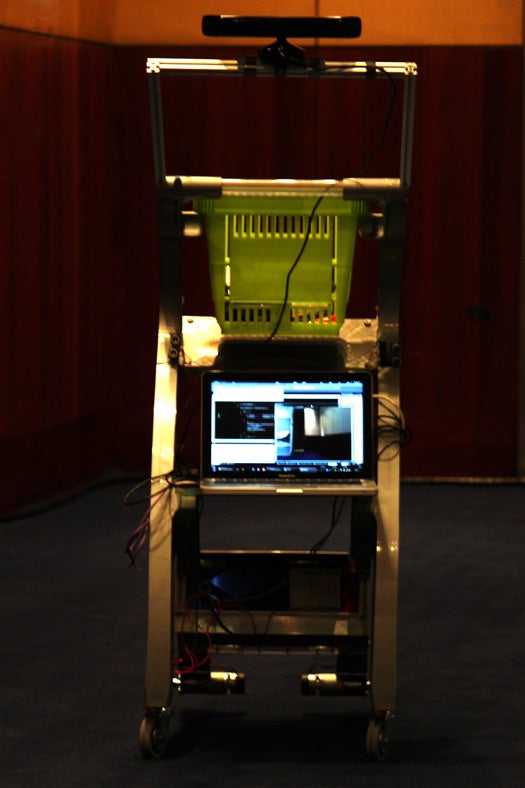 Luis de Matos, a member of Portugal’s Team wi-GO, used to always take his girlfriend shopping with him. He needed her to push the cart while he steered his wheelchair. But after the Kinect was introduced, he and the members of his team developed the wi-GO, and that became a thing of the past. This autonomous shopping cart uses gesture recognition on a Kinect to identify its user and follows him or her around the store. Sensors keep the cart from running into anyone else, and the wi-GO makes a sound if it ever loses track of its owner. The user can then just wave to help the wi-GO find them again. Team wi-GO also recognized the danger of the wi-GO being stolen and is working in real-time security alerts for when the wi-GO is taken outside of a designated area. Read more about the wi-GO and other Kinect-powered projects from the Imagine Cup here. 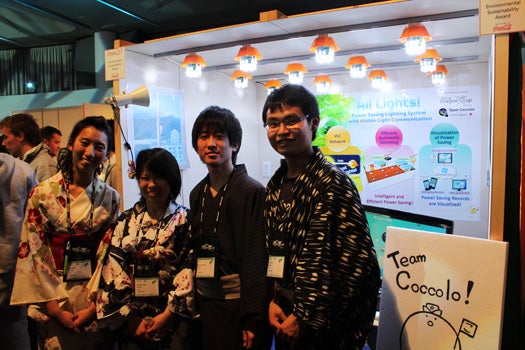 Japan’s current power crisis was the inspiration for All Lights!, Team Coccolo’s energy-saving lighting system. Their LED lamps can sense when a room is already lit by sunlight, and automatically dim. In a large room, where areas away from the windows may still be dim, the lights will remain on in those areas. The lamps talk to each other using visible light communication–the LEDs transfer data at 400 KB/second between lamps by blinking quickly. Photodiodes on the lamps pick up the blinking and, thus, the data. Thanks to that innovation, only one lamp has to be wired to the touch screen controller. Information on power savings is stored in the cloud, where building managers can track it. They can also invoke the administrative function, and keep their light-starved workers from turning the lamps up too high. 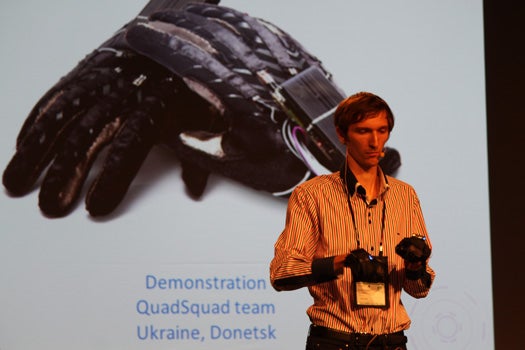 The winner of the actual, physical Imagine Cup was Team Quadsquad from Ukraine, for their sign-language translation system, Enable Talk. Enable Talk consists of a pair of gloves, covered in flex sensors, accelerometers, compasses and gyroscopes, which take the data from a sign language gesture, translate it using a neural network and transfer it via Bluetooth to a mobile phone, which reads the speech version of what was said using Microsoft Speech API. The gloves are currently just a prototype, but already have 90 percent accuracy, eight-hour battery life, and cost only $150 to make. The team estimates that if they move to mass production, each pair will cost just $75. Read more about the Enable Talk system here.