Want to fly an unmanned surveillance drone? It's easier than you think. Much, much easier 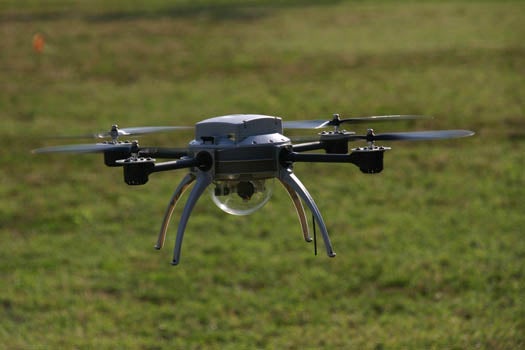 The offer came simply via the subject line of an email: “Want to fly a drone?” It was from Todd Backus of DATRON, a maker of–among other things–military grade radio communication systems and tactical data networking setups based in Vista, Calif. It was a question that didn’t require a whole lot of consideration on my part–if there were drones to fly at AUVSI’s massive unmanned systems show in Washington D.C. last week, I was going to fly them.

And that’s how I end up on a soccer pitch far from the Walter E. Washington Convention Center piloting a small quadcopter drone and quietly praying that we won’t be arrested.

Not that we’re up to anything criminal, but I have no idea how close or far we are from D.C.’s numerous “high-value” locations and the restricted airspace that surrounds them. What I do know is that if I’m jailed on suspicion of terrorism, my editors likely won’t cover my expenses.

| News Corp’s ‘The Daily’ Has Its Own News-Gathering Aerial Drone, Which Is Drawing FAA Inquiries| |

DATRON’s Scout is a small quadcopter designed to be a man portable military reconnaissance drone, a vertical takeoff and landing (VTOL) vehicle small enough to travel with dismounted soldiers in the field. Broken down–the propeller arms and four slender legs snap on and off of the main body–it fits compactly into a handheld carrying case or backpack. That main vehicle body contains a swappable payload on the underside (for this flight we used the Scout’s standard 5-megapixel, 10X optical zoom camera), the power source (also swappable), and all the computerized and magnetized guts that keep the thing aloft and level during flight.

We’ve seen plenty of drones like this before, but until you fly one it’s difficult to understand just how easy they are to operate. And by easy, I mean extremely easy. Point-and-click easy. So easy I was tracking targets on the ground and capturing video of points of interest within about two minutes of picking up the control unit–a ruggedized Xplore tablet PC–and tapping “Takeoff” with the stylus.

That’s not an oversimplification. This thing is so user-friendly that takeoff simply requires tapping a touchscreen button. The propellors whirl to life, quickly taking the drone up about three-and-a-half feet where it hovers, waiting for its next command.

From there, it’s a simple matter of manipulating on-screen sliders and plotting points on the on-screen map. When Scout is deployed in an area, the control unit is loaded with satellite map data for the area of operation. That map appears large on the lefthand side of the tablet screen. Click and hold on a point on the map, and scout goes there. To the right you have a drone’s-eye-view of the surrounding landscape–a rather commanding 360-degree aerial view that provides the thorough situational awareness that makes drones like this so valuable.

Scout’s Interface: This is an older (and somewhat grainy) screen cap of Scout’s piloting interface, with the satellite map displayed on the left and the drone camera view to the right. The slider bar on the righthand side of the map controls the drone’s elevation, while the similar slider to the left of the camera view controls the zoom. Some features now available are missing from this version. DATRON

Sliders like the ones on a browser’s scroll bar let you take the drone higher or lower and zoom the camera in and out. Similarly simple controls let you tilt the camera up or down and rotate the drone itself in the air. When you stop giving orders, Scout hovers silent and stationary, waiting for its next cue. Gusting winds might push it around–and it’s breezing steadily during my flight–but the little drone is surprisingly determined, stabilizing itself and always returning to the patch of sky from which it was displaced.

If you’re reading this and thinking that piloting this drone sounds like nothing more than playing with a really expensive toy, allow me to reorient your thinking: this is badass. Not only because it’s a six-figure drone and I got to play with it for a few minutes, but because it jars me to a realization: Once the purview of highly trained military and intelligence types, aerial drones are rapidly becoming devices for the everyman.

Basically anyone possessing basic computer literacy can operate this drone–and one day when economies of scale push prices down and the FAA opens up a greater slice of sky for unmanned systems they probably will. But while I want to stop and consider what this means for the future, there’s no time. We’ve only got about 20 minutes of battery, and I’m still on the hunt for “insurgents” in red corporate polos, splitting my time between moving Scout’s icon around my computerized chessboard and watching the loyal quadcopter traverse the empty space above the soccer pitch in kind.

A couple of DATRON’S guys are strolling around the field, giving me something to target (you can see this in the video below) while DATRON’s Paul Wilson is looking over my shoulder and helping me correct my mistakes while rattling off the drone’s most vital statistics (it can fly through rain and wind gusts up to an impressive 50 miles per hour, and has a range of nearly two miles). Behind him Scout’s Program Manager, Chris Barter, is anxiously reminding me not to take his machine much higher. I’m getting more confident now, and more ambitious with the altitude slider (Wilson tells me Scout’s ceiling is more than 1,600 feet above the point of takeoff, but I think Barter is more worried about nearby airspace restrictions).

Besides, the battery is dwindling. Wilson directs me to bring it on home. I tap the “home” icon on the map, which marks the point of origin for our flight. Scout zips directly back to where we started, pauses at a low hover, and asks via the tablet if I’m really ready to put it down. I’m not, but I click the flight termination button anyhow and the drone does the rest, setting down smoothly on the exact patch of grass where it took off and bringing its propellors to a full stop. During the whole flight, I did nothing but tap a screen with a stylus.

The cops never showed up to ask us what we were doing. But had they, we definitely would’ve seen them coming.

This isn’t the only robot that flies. Check out the robots I threw.