A fleet of robotic pollution predators splashed into service today in Spain, in a trial to determine how well robots … Continued 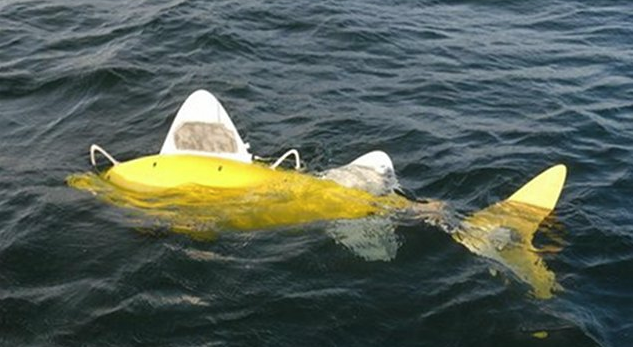 A fleet of robotic pollution predators splashed into service today in Spain, in a trial to determine how well robots can hunt down water contamination and report its location to ships or shore.

The rather large and yellow autonomous robotic fish will sample harbor waters, constantly checking for pollution and making it simpler for authorities to track leaks or illicit dumps in real time. They use micro-electrode arrays to sniff various contaminants and can be modified to look for various substances, according to the BBC. Right now they can detect phenols, heavy metals, oxygen levels and water salinity.

The fish are about five feet long, far bigger than the small robofish we’ve seen swimming in labs here in the U.S. Like other robofish, these swim like real fish, using fins for propulsion and changing directions on a dime. A fishlike design is more efficient than a propeller- or thruster-driven autonomous vehicle, according to scientists in the SHOAL Consortium, a public-private partnership in Europe that developed the robots. Props can snag on seaweed or debris, but fins can move through shallow waters with ease, consortium member Ian Dukes told the BBC.

The prototypes cost about £20,000 (about $31,600) apiece, and need to be recharged every eight hours, swimming back to a base when their batteries get too low. They swim independently and can coordinate with each other, working in swarms to track pollution and send data back to a shore-based station a little more than half a mile away. They can even map their own locations, a difficult problem for robots.

The robofish could help reduce the costs associated with harbor pollution, which the BBC says is a little more than $2 billion a year. The fish deployed Tuesday in the northern Spanish port of Gijon.