The path to a better internet begins with engineers rethinking its networks. It might be the only way to keep it free 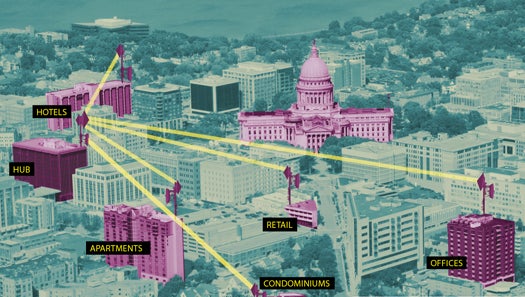 When the soon-to-be-defunct government of president Hosni Mubarak shut off Egypt’s Internet early on the morning of January 28, 2011, it proved the U.S. State Department’s working theory: that the arc of history bends toward democracy, but it needs Internet access to get there. One project meant to ensure what Secretary of State Hillary Clinton calls “the freedom to connect” is an “Internet-in-a-suitcase,” a kit of wireless routers and software that could be smuggled into an authoritarian country and allow revolutionaries to set up their own local area network (LAN) on the fly. Its developers at the public policy institute the New America Foundation call the concept “device as infrastructure,” a platform that operates on its own, without requiring a connection to the broader Internet. By avoiding the traditional phone-company cables—and, in the process, a connection to the backbone of the Internet—this ad hoc network would be extremely difficult to monitor or shut down.

But the Internet-in-a-suitcase doesn’t work. In a test at the Occupy D.C. protests last fall, activists found that even when their routers were running smoothly, when they tried to connect to the broader Internet, it was too slow to be of any use. In an increasingly cloud-based Internet, any LAN is severely hobbled without access to the broader Net. Applications such as Gmail, Twitter and YouTube require what engineers call backhaul, or a connection to the Internet’s global infrastructure. The problem isn’t the construction of a single network, but rather a working internetwork, one that links to the existing infrastructure of a nation’s telecommunications system—precisely the ones under the strictest control. An Internet-in-a-suitcase risks being the connectivity equivalent of a gleaming new warship with no way of getting to open water. A LAN may still be useful for limited communication, but not if the revolution is to be tweeted.

Locally operated service providers might not help Libya or Egypt at first, but they plant a crucial seed: training smart network engineers.The way to build the kind of healthy network that the New America Foundation says is essential for democracy isn’t with any single technology, but by cultivating network engineers who actually care about their users. “It’s not only about getting data over the link,” says Anton Kapela, a network engineer at 5 Nines, an Internet provider in Madison, Wisconsin. 5 Nines runs a 3,000-square-foot data center that hosts websites and applications for local businesses. But it also sells Internet access across the city using a combination of microwave links, copper telephone loops and fiber-optic cables. Kapela and his colleagues treat network monitoring more like gardeners than security guards, constantly weeding out bad links, configuring new ones, and using the outbound traffic to the data center to balance the inbound traffic to their Internet service provider (ISP) customers. 5 Nines works because it’s entirely local; both sides of its business share the same physical links to the backbones of the Internet, and customers from both revenue streams will let them know when the links go down.

Community-owned and -operated service providers such as 5 Nines might not help Libya or Egypt at first, but the renewed emphasis on local connections is a powerful rejoinder to the monopolistic control that threatens the Internet at all levels. Local ISPs plant a crucial seed. They train smart network engineers to think about the structure of the Internet in new ways. The secretive tendencies of big telephone and cable companies have turned the tricks learned by bootstrapping engineers into something of a lost art. The Internet has become worryingly monolithic—most cities in America have only a few ISPs to choose from—and as such, it’s easy to forget that although the Internet’s usefulness is global, access to it is inherently local.

A network such as 5 Nines can serve the interests of its community the same way a local bank or general store used to. When the people of Wisconsin petitioned to recall their governor, 5 Nines allocated some of its excess bandwidth to host a high-definition streaming video of the signature count. It’s hard to imagine Comcast or Verizon doing the same.
A local, independent ISP in Cairo might have kept Tahrir Square online too. A network that is local while reaching the Internet’s global backbone cannot, however, be self-configuring. It requires constant management and maintenance from savvy network engineers. And it doesn’t
fit in a suitcase.