Talk about a rude awakening. If you snore, this new pillowbot from Japan will gently brush your cheek to get... 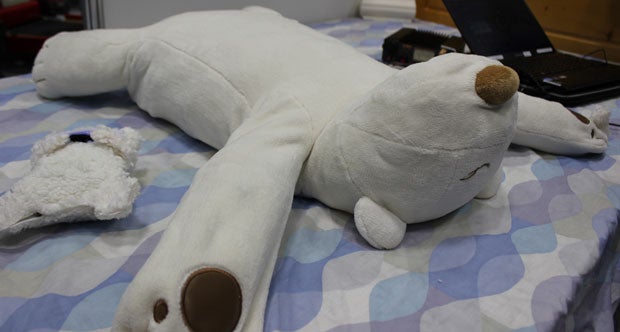 Talk about a rude awakening. If you snore, this new pillowbot from Japan will gently brush your cheek to get you to stop — or flip out of bed in terror as its disturbingly slow arm moves toward you.

It’s designed to help people sleep better by stopping chronic snorers and those who suffer from sleep apnea, which causes breathing difficulty while sleeping. The robot, called “Jukusui-kun” or “deep sleep” in Japanese, is designed to look like a friendly snoozing polar bear. It is connected to a small glove device (also fuzzy bear-shaped) that measures blood oxygen levels, and a below-the-sheets sensor that detects loud noises. The pillow itself also has a microphone to monitor snore decibel levels. A person’s vital stats are pre-programmed into a terminal, which connects wirelessly so you don’t get tangled up in cables.

When the sensors detect blood-oxygen levels are getting too low, or when snoring becomes unbearably loud (yeah that’s right), the bear-pillow’s paw moves slowly and frighteningly toward the sleeping person’s face. This gentle cheek-brush induces the snoring person to turn over on to his or her side, which stops snoring and restores a more restful sleep. The bearpillowbot was developed at Tokyo’s Waseda University and was unveiled during the International Robot Show.