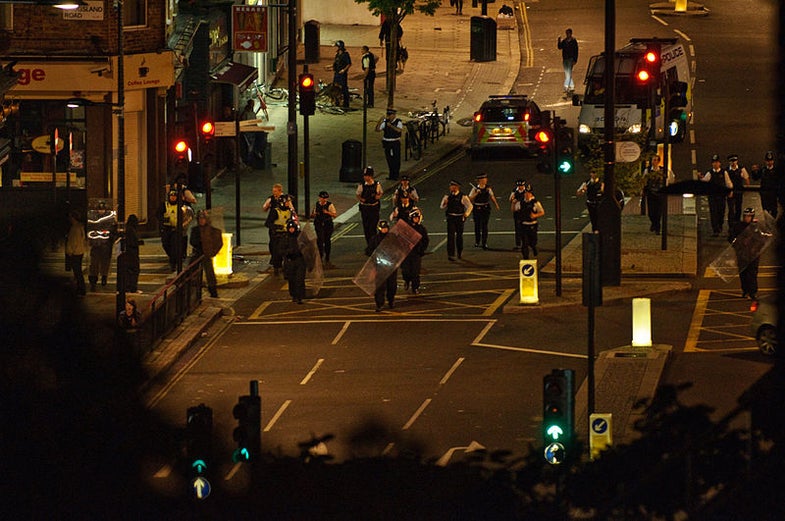 Police in London likely aren’t relishing their jobs this week, but Scotland Yard is getting a chance to test drive facial recognition technology that’s under consideration for use during the 2012 Olympic Games. The AP has learned that police there are feeding images into the newly upgraded program, and the results are somewhat promising.

But not more promising than simply disseminating photographs to the general public, which is still far cheaper and more effective than using the nascent facial recognition technology. In an effort to finger those rioters wanted for some more egregious crimes (like assault), the police have released some two dozen photos and videos to Flickr, where 40,000 viewers have looked them over for familiar faces.

Moreover, independent sites like LondonRioters.co.uk have popped up, asking the public to identify people captured on camera while engaging in “thuggery.”

But unfortunately, the images released by the police are mostly grainy pics snapped by CCTV cameras–images too distorted for the software to make use of. And therein lies the problem for this kind of technology: the images need to meet certain standards of quality, and the system has to have something to match against–if a perp has no past record with police, the system comes up empty. Well, that and the fact that facial recognition technology is about the biggest, scariest Big Brother-ish technology taking shape out there right now.

Still, it’s a test run that could help developers tweak the tech for 2012, where it very well may be rolled out. The people that Olympic security forces will be looking for at the Summer Games are the kind that have a record of past misdeeds, and therefore in many cases will have a good photo on file. In that case, Scotland Yard might be onto something.