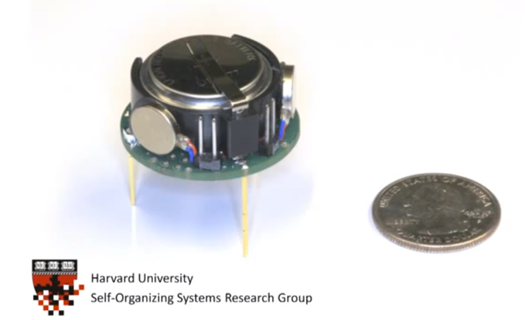 These tiny Kilobots are not named for their heft. The ‘bots are roughly the size of a quarter and move about on tiny vibrating toothpick legs. Individually, they aren’t much to look at. But Kilobots aren’t supposed to be taken in individually–they’re designed to swarm in the thousands, and at $14 a pop they very well may be doing so soon.

Developed at the Self Organizing Systems Research Group at Harvard, Kilobots demonstrate some interesting swarm behaviors, even if they’re not necessarily “doing” anything yet. In this case, the robots can all be programmed to perform a task at the same time in less than 40 seconds via an overhead infrared controller. And once a task is set before them, they can communicate with other Kilobots in their immediate vicinity to carry out their programming.

Of course, there are a lot of cool things one could do with a swarm of robots that work together to execute tasks, but first you have to prove that a large number of robots can actually work together, and that’s what makes these little ‘bots so unique. Made of cheap components, the cost is next to nothing compared with other, more sophisticated robotic systems, and it takes about five minutes to build a single robot. Harvard’s current swarm of around 25 Kilobots will soon grow to 1024 individual robots, enough to demonstrate self-healing and collective transport.

From there it’s just a short leap to swarms of larger (and smaller) robots that can execute a variety of tasks for their human overseers, and just one more short leap to complete enslavement of the human species. Science!