Japanese PossessedHand Electric Wristband Moves Your Fingers For You

Play the guitar without having to learn the guitar 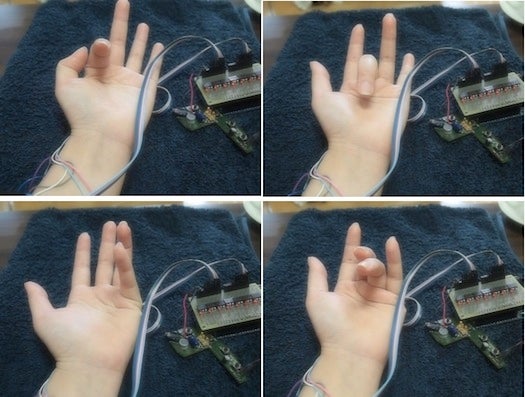 Researchers at Tokyo University, along with some help from Sony, created a device that straps onto your arm, sort of like a blood pressure cuff, and sends electrical signals to your fingers that can move them in precise ways. It’s called, of course, the PossessedHand.

The PossessedHand uses an Arduino microcontroller, the low-cost tool of choice for DIYers, and 28 electrode pads that are applied externally. There have been other devices that do this sort of thing, but they’ve often been pretty clumsy, needing electrodes to be inserted into the skin (ouch!). The PossessedHand is entirely external and painless, and, according to PhysOrg, “is said to feel more like a gentle hand massage.” The signals are also not unpleasantly strong, apparently feeling more like a nudge to move rather than a forceful automatic movement of the fingers and wrist.

The uses for such a device are pretty clear, especially as you can preprogram strings of signals. It could be used in music education, to teach the proper finger movements and placings, or it could translate spoken language into sign language, which your hand performs automatically. There are potential medical uses as well; teaching stroke victims how to use their hands again, that kind of thing. It’s not a prosthesis, really, but it could prove useful to a totally new set of people. And it’s definitely more useful than Daito Manabe’s face-electroshocking hobby. Here’s a video of it in action from New Scientist: