The very notion of quantum computing is a bit mind numbing, and the technology is so nascent that researchers aren’t... 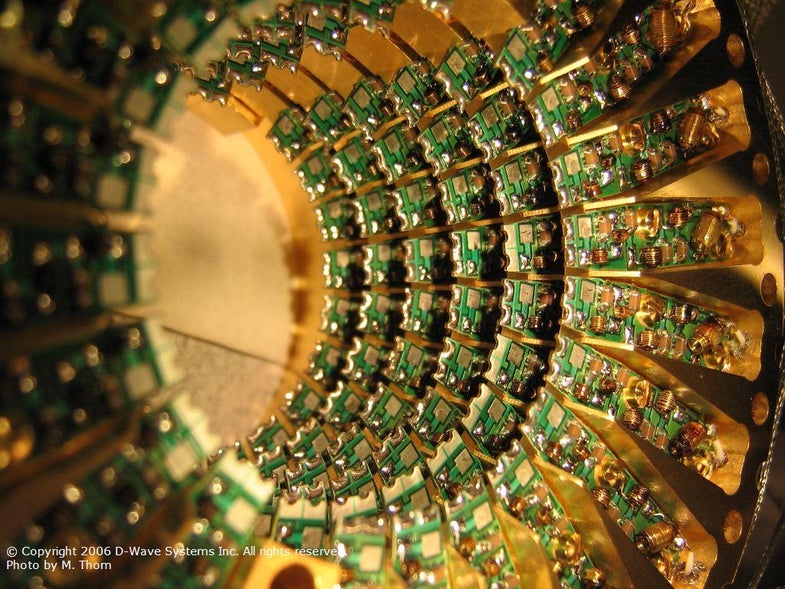 The very notion of quantum computing is a bit mind numbing, and the technology is so nascent that researchers aren’t even really sure of the best way to go about constructing a quantum computer. Nonetheless, D-Wave Systems Inc. has just sold one of its eponymous D-Wave One quantum computing systems to none other than Lockheed Martin, along with a multi-year contract to keep the thing working.

D-Wave’s technology is something they call a “quantum annealing processor,” and without going to deep into the inner workings of the thing (because I can’t), it is basically a means of finding solutions to “combinatorial optimization problems.” In other words, rather than dealing in ones and zeros, the processor taps the processing power of qubits–or quantum bits–which are multidimensional analogs to the analog bit.

The fundamental advantage here is that a qubit can be in more than one state at the same time, unlike the classical bit. And so quantum computers can, in theory, consider multiple possible solutions to a problem at the same time in essence. That makes them vastly more powerful and much, much faster than today’s conventional supercomputers.

D-Wave has come under some scrutiny from the quantum community, where other researchers have claimed that their “quantum optimizers” can really solve useful problems. But Lockheed seems to think they can. No word on what the company aims to do with their quantum computer, but D-Wave claims it is going to be used to address the Lockheed’s “most challenging computation problems.”