Back in 2009, we told you about the skin factory concept at the Fraunhofer Institute for Interfacial Engineering and Biotechnology,... 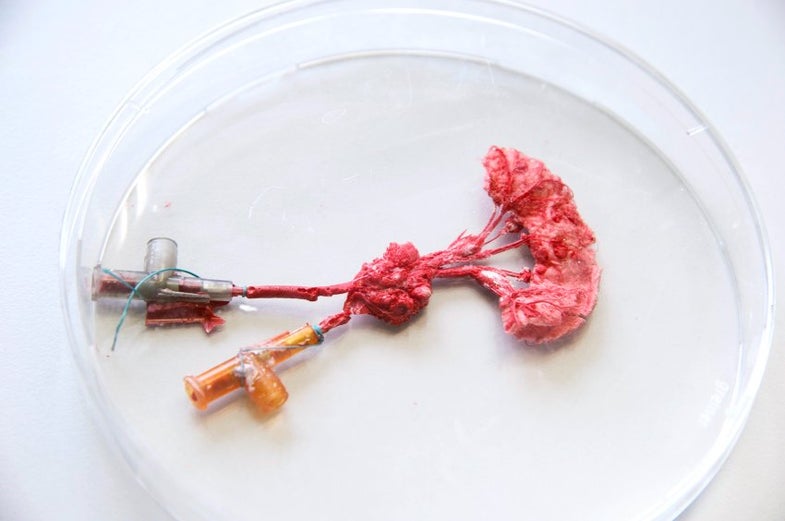 Back in 2009, we told you about the skin factory concept at the Fraunhofer Institute for Interfacial Engineering and Biotechnology, where scientists hoped to mass-produce skin at low cost for clinical testing and other uses. Now it’s come online, with robots squeezing pink solution into pipettes and turning out sheets of human flesh. Der Spiegel took a look inside.

The factory can produce 5,000 penny-sized discs of whitish translucent tissue every month. The designers say it can also come in shades of brown. Each disc will cost about $72, a bit more than expected when the project was in its planning stages two years ago. The German newspaper Der Spiegel took a tour of the facility with its director, Heike Walles; check out their coverage here.

Robots and computers control the skin-making process, which takes place in a sterile, climate-controlled setting. The skin broth is closely monitored for any signs of infection and computers guide the lasers and blades that cut swatches of skin. The goal is to pave the way for factory-produced human tissue, complete with blood vessels, that could be used to treat injuries or various medical conditions.

As Der Spiegel puts it, Walles believes factories like this one will be the only way to efficiently produce new tissue like bladders, tracheas, cartilage and even human organs. She and others have successfully produced engineered tissue for human transplantation, but the process is hugely expensive and labor-intensive. An automated manufacturing facility could make it cheaper and simpler, she says.

For now, the tissue is being used in animal testing and could even be used for products like cosmetics, but it is still a long way from being transplanted. European Union regulations require several stages of animal testing before it could be used in a clinical setting, Der Spiegel reports.