A Motorized, Super-Detailed Robot Villain Made By A Doctor Who Fan

A DIY version of the sci-fi series' ultimate alien: the Dalek. 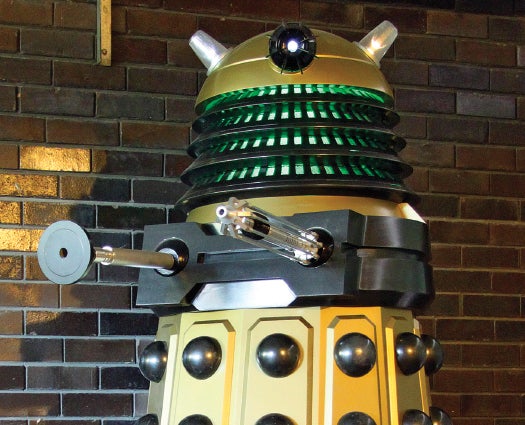 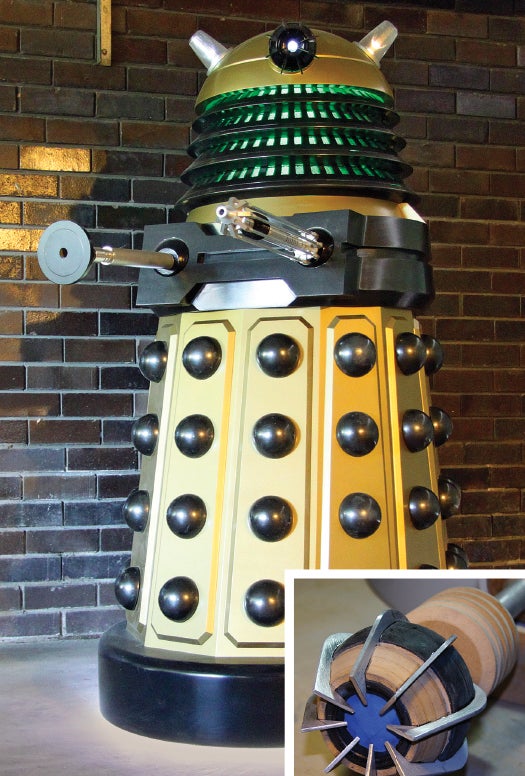 Jim Rossiter hacked a six-channel R/C remote to toggle the Dalek’s lights, swivel its head, and move its eye and arms up and down.

Despite his devotion to Daleks—those cruel, armor-clad extraterrestrials from the TV show Doctor Who, now in its 50th year—Jim Rossiter has no interest in annihilating other civilizations. The 57-year-old Australian just likes how the aliens look. After decades of building radio-controlled vehicles, Rossiter made his own eerily accurate Dalek, right down its screeching battle cry: “Exterminate!”

A typical Dalek resembles a giant saltshaker outfitted with a ray gun, a menacing eye on a long stalk, and a third appendage shaped like a sink plunger (which, on the show, can suck its foes to death). Beneath the exoskeletal armor lives a tentacled mutant soldier whose mission is to destroy all other life.

Still, Daleks have an unusual B-movie charm that inspires fan adoration. Rossiter, a machinist by trade, found himself part of a global community of passionate Dalek builders who share plans, tips, and tricks, ncluding advice about 3-D–printing replicas of rare 1960s ray guns.

Rossiter began with a wood and fiberboard frame. What initially resembled a weird piece of furniture soon looked threatening, as Rossiter lathed several pieces of aluminum into the Dalek’s ray gun. He set the barrel of the gun in a spherical wooden bedpost, and later fit the bedpost inside the body so it could rotate like an arm in a shoulder socket.

Next, Rossiter spent months sawing, sanding, and fiberglassing the Dalek’s body and dome-shaped head. To make the eyestalk move up and down, he first installed a windshield-wiper motor. Once he switched it on, though, it wouldn’t stop. “The motor kept trying to move the arm [on its own],” he says. He eventually opted for a simpler servomotor, and he used another servo—linked to a wheel from an old remote-control car—to rotate the head from the inside.

Other fans built Daleks with room for a human driver, but Rossiter had a different plan. “I wanted to see it moving rather than see from inside,” he says. So he wired every part for remote control, and set the body on top of a concealed baseplate equipped with two caster wheels and a pair of fat mobility-scooter tires. Each tire moves on an independent motor, allowing Rossiter to drive the Dalek like a tank.

Finally, he transferred sound bites of the Dalek’s bleating voice to an old MP3 player, pulled that apart, and wired it to a custom amp and a set of speakers in the body. He can activate the voice from afar, but he’s working on a remote microphone and voice-modulation system to twist his words into Dalek-speak in real time.

Rossiter’s monstrosity has already terrorized nieces and nephews, but in October he plans to invade an Australian science-fiction convention called Armageddon. The challenge will be getting the alien there; it doesn’t fit through his shop door. “Daleks have their own spaceships,” Rossiter says. “I only have a little hatchback.” 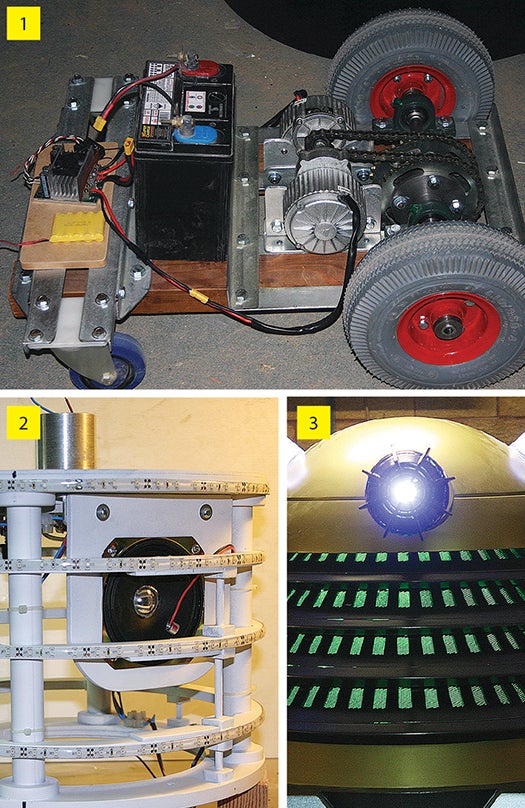 How To Build A Cyborg

The alien’s armored torso sits on a wooden platform outfitted with caster and mobility-scooter wheels. Although the original Daleks drew power from their surroundings, Rossiter’s relies on a standard 12-volt car battery.

A Wi-Fi receiver in the body picks up commands from a wireless remote control and sends them to the Dalek’s components, such as a speed controller that governs the scooter-wheel motors. From 300 feet away, Rossiter can activate LEDs and speakers and move the Dalek around.

Rossiter created a convincing eyestalk by draining a Magic 8 Ball toy, adding a magnifying glass to one end, and attaching a hollow aluminum tube with a blue LED to the base. “It shines through the eyestalk into the eye,” he says. “It gives a good effect.”

Some astronomers think 100 billion Earth-like planets may exist in the Milky Way galaxy. That number plugs into a formula, called the Drake equation, used to calculate the number of intelligent alien civilizations humans could discover. But Stephen Hawking and other scientists worry that reaching out could lead to our doom. Hence we propose adding the Dalek variable: the chance of an intelligent race surviving an attack by malevolent extraterrestrial invaders.

1. Number of alien civilizations in the Milky Way galaxy that emit detectable signals

2. Rate at which stars that could host life-bearing planets form (number of stars per year)

3. Fraction of those stars that have planets

4. Number of planets in each system that might host life

5. Fraction of planets that produce life

7. Fraction of civilizations that develop the technology to send signals into space

8. Length of time a civilization sends signals detectable by others (years)

9. Proposed: The Dalek variable—fraction of those civilizations that can survive an alien attack

* Astronomers have guesstimates only for these