Building smart homes that are networked to run as efficiently as possible is supposed to be one of the technological... 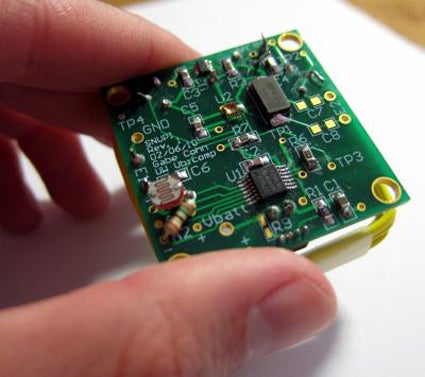 Building smart homes that are networked to run as efficiently as possible is supposed to be one of the technological fixes to our current energy consumption problem. But what’s often lost in all the heady talk about innovating our way to a greener future is the fact that those wireless networking technologies also consume power, reducing the net benefit. So a team of researchers came up with a novel fix: eliminate the power burn required by wireless technologies by using a home’s copper wiring as a huge, building-wide antenna.

Sensor Nodes Utilizing Powerline Infrastructure, or SNUPI, is a system of tiny, low-power sensors that monitor a home for a variety of energy-sucking problems – moisture in the crawl space, heat escaping through a poorly insulated window, lights left on in an upstairs bedroom – and beams a signal back to a central hub via the copper wiring already installed in the home. Since the sensors don’t have to communicate wirelessly with the base station – the copper does them the favor of ferrying the 27-megahertz signal – they don’t need a large power source. In fact, a single watch battery can run each sensor for a decade or longer.

SNUPI’s creators – a collaboration of researchers from University of Washington and the Georgia Institute of Technology – realized that most wirelessly transmitting sensor technologies were spending more than 90 percent of their energy on communications rather than monitoring. So the team set out to turn that number on its head.

What they came up with is a wireless sensor that consumes less than a single milliwatt when transmitting. The sensors must simply be placed within 10-15 feet of the home’s existing network of copper wire, and that network is even larger that the researchers originally thought. For instance, a cord plugged into the wall extends the copper network the length of the cord, so even in large spaces sensors can transmit their signals through a lamp or other household item that’s not necessarily close to the wall, where most of a home’s copper wiring resides.

This isn’t the first time someone has put forth the idea of using a building’s own infrastructure as a transmission antenna, but its high degree of power efficiency and ability to cover almost every inch of a residence (in a typical 3,000-square-foot house, SNUPI can cover 95 percent of the area with sensors, versus only about 75 percent for other wireless sensor systems) make it ideal for wiring together the truly smart home. The next step: using solar power or even body motion to power the extremely energy-thrifty sensors so that batteries aren’t even a consideration.