Scientists half-jokingly call it the “ignorosphere” — a region about 50-100 kilometers above the Earth that’s too high for airplanes,... 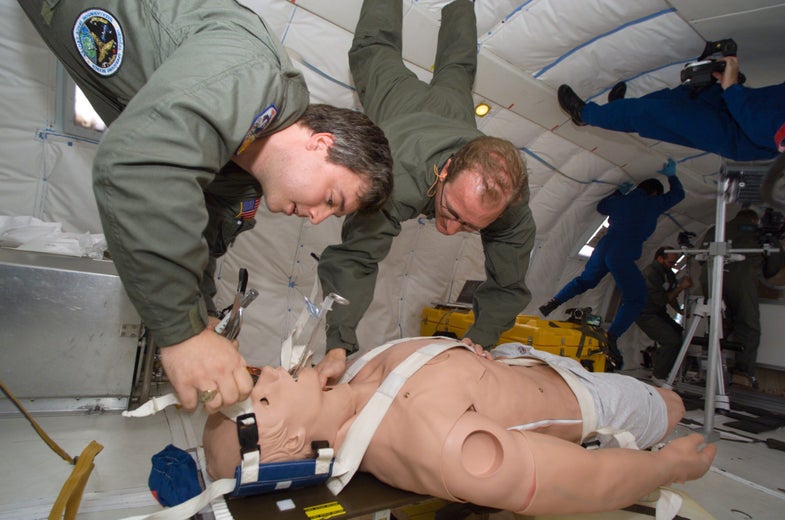 Scientists half-jokingly call it the “ignorosphere” — a region about 50-100 kilometers above the Earth that’s too high for airplanes, but too low for satellites. “It earned its name because even though the area is valuable to researchers, there has been no easy way to get to it,” said Alan Stern, planetary scientist at the Southwest Research Institute. But, Stern says, suborbital flights, like those made by Virgin Galactic’s SpaceShipTwo, go right to the heart of this region, which includes the layer of the Earth’s atmosphere that lies above the stratosphere and below the thermosphere.

Suborbital vehicles like XCOR’s Lynx and SpaceShipTwo will give passengers who pay upwards of $100,000 a ride to space when the commercial space companies begin launching their flights as early as next year. But scientists are now looking to these flights to provide a low-cost laboratory where they can solve research questions that can only be answered in space.

Parabolic flights like the “Vomit Comet” zip through the microgravity zone in a brief 30 seconds, but suborbital flights spend about 3-5 minutes in microgravity conditions. That may not sound like a lot of time, but it’s sufficient for studying the effects of gravity changes on humans and materials. Swedish researchers at the conference in Boulder pointed out that some microgravity studies can even fly on the suborbitals as self-contained experiments, without an accompanying operator.

Suborbital flights provide an analog environment for space, where biomedical technicians can monitor human physical responses to spaceflight. Researchers can then use this information to develop exercise protocols and regimens for astronauts that can counteract or minimize the negative impacts of spaceflight on the human body. Virgin Galactic’s SpaceShipTwo will have seating for six passengers and two pilots, as well as a large cabin that will enable freedom of movement — “wiggle” room that’s vital to experiments involving both a human subject and a researcher.

Researchers have historically studied the Earth’s atmosphere using ground-based instruments, balloons, satellites, and sounding rockets, but none of these can address the region known as “the last frontier.” Suborbital flights will provide access to this part of the atmosphere, which serves as the boundary between the near-Earth environment and the ionosphere — where solar radiation strikes. “We can sample it, we can understand the chemistry, and we can understand how it’s affected by global change,” said Stern. Suborbital platforms can also carry remote sensing instruments to measure upper atmospheric winds, which are not well understood.

Getting into the “ignorosphere” will also place astronomers in a better position to study objects in the Solar System that are difficult to detect using current search methods. For example, a telescope onboard a suborbital platform could allow astronomers to get a good look at the Aten and Apohele asteroids and comets that are too close to the Sun to be observed by space telescopes.

Other astronomy studies include searching for the vulcanoids — a population of small asteroids believed to exist inside the orbit of Mercury. So far, searches for the vulcanoids have been severely hampered by their angular proximity to the Sun, which prevents them from being seen from Earth except during the very brief twilight conditions. But a special imager that will fly onboard a suborbital vehicle will allow planetary scientists to conduct a relatively low-cost vulcanoid search over a large area. “In the suborbital region, you’ll get minutes of twilight conditions instead of seconds,” said Stern.

In addition to the actual science, suborbital flights offer a unique way to educate the public and engage them in scientific experiments. With the new focus on social media, scientists and engineers aboard suborbital flights can involve the public in real-time discussions about how they’re doing their science and what they’re finding. Emily Lakdawalla with The Planetary Society, who gave a remote audio presentation at the Boulder meeting, says that if you engage people who are already interested in science — through tools like blogs, Facebook, and Twitter — they will serve as unpaid public information officers and spread the word throughout their own communities.

Stern says the success of commercial suborbital vehicles hinges on a few unknown factors. First, there is the question of how quickly people adopt the technology, and once the technology catches on — how much will the cost drop? “It’s amazing to think about whether the price might come down to $50,000 a flight,” said Stern. “People pay that much to go to Mount Everest — how about going into space instead?” Then there is the issue of flight safety. “If there’s one accident every 100 flights, it will be considered dangerous,” said Stern. “But if it’s one in 10,000 flights, people won’t think twice — it will be like stepping on an airliner.”

Virgin Galactic claims to already have about 300 tourist reservations and more than $40 million in deposits for flights on its SpaceShipTwo. And Stern believes the science market will be even stronger than private passenger sales. “Science agencies like NASA and NSF will probably buy dozens and hundreds of tickets over time,” he said. “Then there are the foreign sales — we’re going to sell these seats and experiment rides to all 195 nations on Earth. There are more possibilities than you can count.”