Your table-tennis dynasty is toast 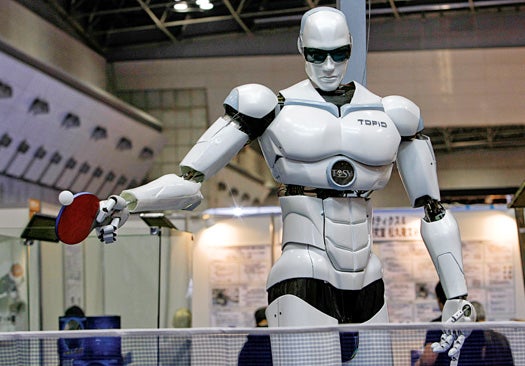 Meet TOPIO 3.0, the ping-pong-playing robot. Made by Vietnam’s first-ever robotics firm, TOSY, the bipedal humanoid uses two 200-fps cameras to detect the ball as it leaves the opponent’s paddle.

TOPIO’s brain—processors and an artificial neural network—analyzes the ball’s path to choose the best return. Last fall, TOPIO 3.0 debuted at the International Robot Exhibition in Tokyo.

At six feet tall, 264 pounds and with 39 independent points capable of movement (such as rotation) throughout its body, the chiseled robot appears a formidable adversary, but it hasn’t beaten a human quite yet. Ho Vinh Hoang, TOSY’s president, hopes that a newer version of TOPIO, which will have a more flexible arm and be able to learn on the fly, will win a match in the near future, possibly at Automatica, an automation trade show, to be held this June in Munich.

Hoang’s ultimate goal: a TOPIO in every home, not just to play ping-pong but to help with household chores and other tasks.