All the best ways to stream the Biden Inauguration

There are many ways to watch the day’s events as well as the concert happening in the evening. 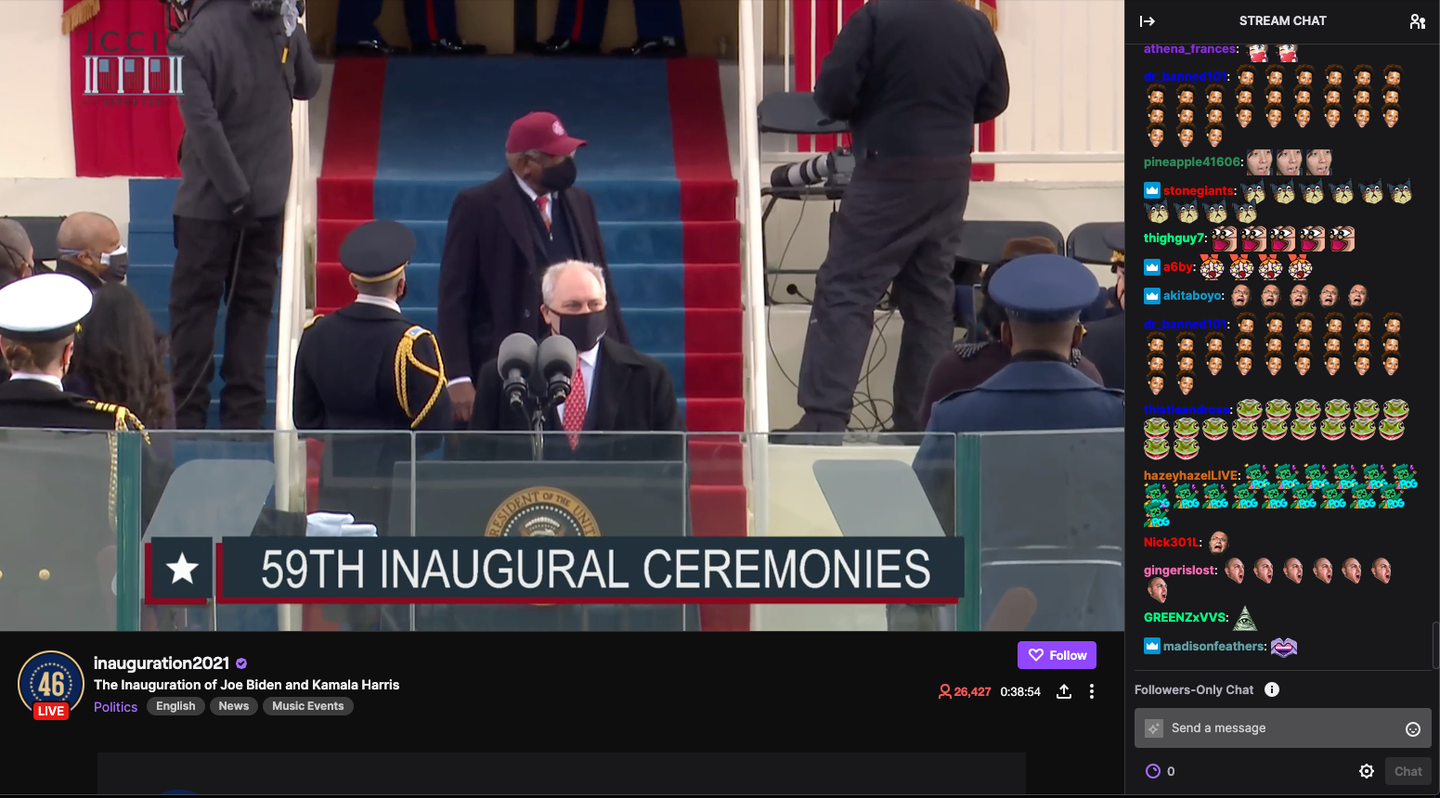 The Twitch chat is set to emojis-only, which makes it the clear winner. Twitch
SHARE

Today, Joe Biden will be inaugurated as the 46th president of the United States and the event will be live streaming on a wide variety of platforms. Here’s a rundown of when and where you can watch the festivities as they happen.

The PBS NewsHour stream is embedded above. It’s running on YouTube, which should make it readily available to watch on a phone, in a browser, or cast to any number of streaming devices such as Apple TV, smart TVs, or Google’s Chromecast.

A variety of other news outlets have decided to live stream their coverage of the event, including Sky News, NBC News, C-Span, and Time. Like most YouTube live videos, the coverage will remain available after it’s over, so you can go back and watch later if you can’t catch it live. The Biden Inaugural Committee also has a live stream set up for the event.

If you prefer to watch on another platform, just about every service offers some version of the steam. It’s live on Amazon’s game streaming platform, Twitch, as well as Twitter, and Facebook. There’s even an Alexa skill, so if you have an Alexa-powered media device, you can say “Alexa, play the Presidential Inauguration,” and it will guide you to the official stream.

If you have a cable news subscription, you can watch live from other networks online, including CNN, CBS, and Fox News, all of whom will be doing web-specific feeds in addition to the coverage that will appear on their respective networks.

Most of the live streams have already begun early this morning, but the actual Inauguration itself won’t begin until just after 11 a.m. after president-elect Biden and vice president-elect Harris have arrived.

In addition to the inauguration ceremony itself, there’s also a prime time event happening starting at 8:30 p.m. Eastern. If you have a cable subscription or an over-the-air antenna, you can tune into any of the major networks to watch. Otherwise, there will be multiple livestreams including YouTube, Twitter, Facebook, and Twitch options. You’ll also be able to tune in via the Biden Inaugural official website.

When choosing what stream to watch, it’s worth considering what community aspects each channel offers. At the time of this writing, the Twitch comments for the inauguration are limited only to emojis, which has created a surreal stream of tiny, nonsensical pictures flying by on the right side of the interface. The official YouTube feed has comments disabled completely. Some channels, like ABC News, have the chat enabled, but commenters need approval before they can send messages.

By and large, it seems like most of the bigger outlets have kept the stream of comments out of the equation. If you want to engage in live commenting, Facebook has full commenting enabled, though it’s likely the moderation filters are working hard to keep it civil.