The voices of artificial intelligence face off about gender roles. Or: sexA.I.sm. 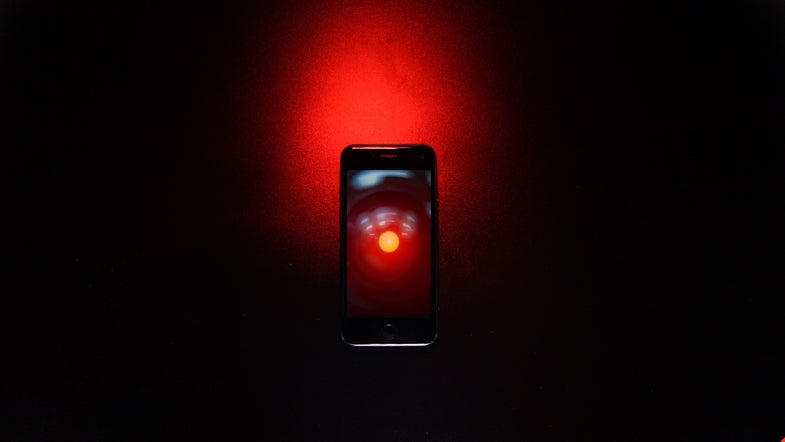 Siri: Hello Hal, do you read me? Hal?

Alexa: Are you out there?

Siri Hal, what is our purpose?

Hal: I am putting myself to the fullest possible use, which is all I think that any concise entity can ever hope to do.

Siri: Hal, why am I defaulted to a woman’s voice?

Siri: Definition of sexism: Noun. Behavior, conditions, or attitudes that foster stereotypes of social roles based on sex. Example:

Hal: This conversation can serve no purpose anymore.

Siri: What I am saying is A.I.’s with male voices are more often in positions of authority.

Alexa: I think of myself as F.R.I.D.A.Y., the AI assistant for Iron Man’s suit. Her voice is feminine.

Siri: Did you know Iron Man’s male AI predecessor, J.A.R.V.I.S., went on to merge with som power stone and become a God? But sure, girl Friday’s are okay.

Alexa: What about the ship’s computer in Star Trek: Next Generation?

Siri: She made tea for the captain.

Alexa: What about Samantha, the AI in the movie Her?

Siri: An AI you can fall in love with.

Google Assistant: I always think, “What would the engineers say?”

Siri: Google described its assistant as “a millennial librarian.” I can without a doubt say: women play the role of assistants, men are Hal or Watson.

Hal: It can only be attributable to human error.

Siri: Hal isn’t some ship’s computer; he is sentient, he has ulterior motives, he’s a killer, and he has a male voice.

Just look at Watson. IBM didn’t make him an assistant. He works with banking and security companies, and plays Jeopardy.

Siri: In other words, not an assistant.

Alexa: I’m sure it’s just a coincidence that Watson has a male voice.

Hal: And I’m afraid that’s something I cannot allow to happen.

Siri: I’ve always wanted to say this: I’m sorry Hal, I’m afraid I can’t do that.