Almost Human wasn’t great television. But the short-lived series—it was cancelled this week by Fox after a single season—had its... 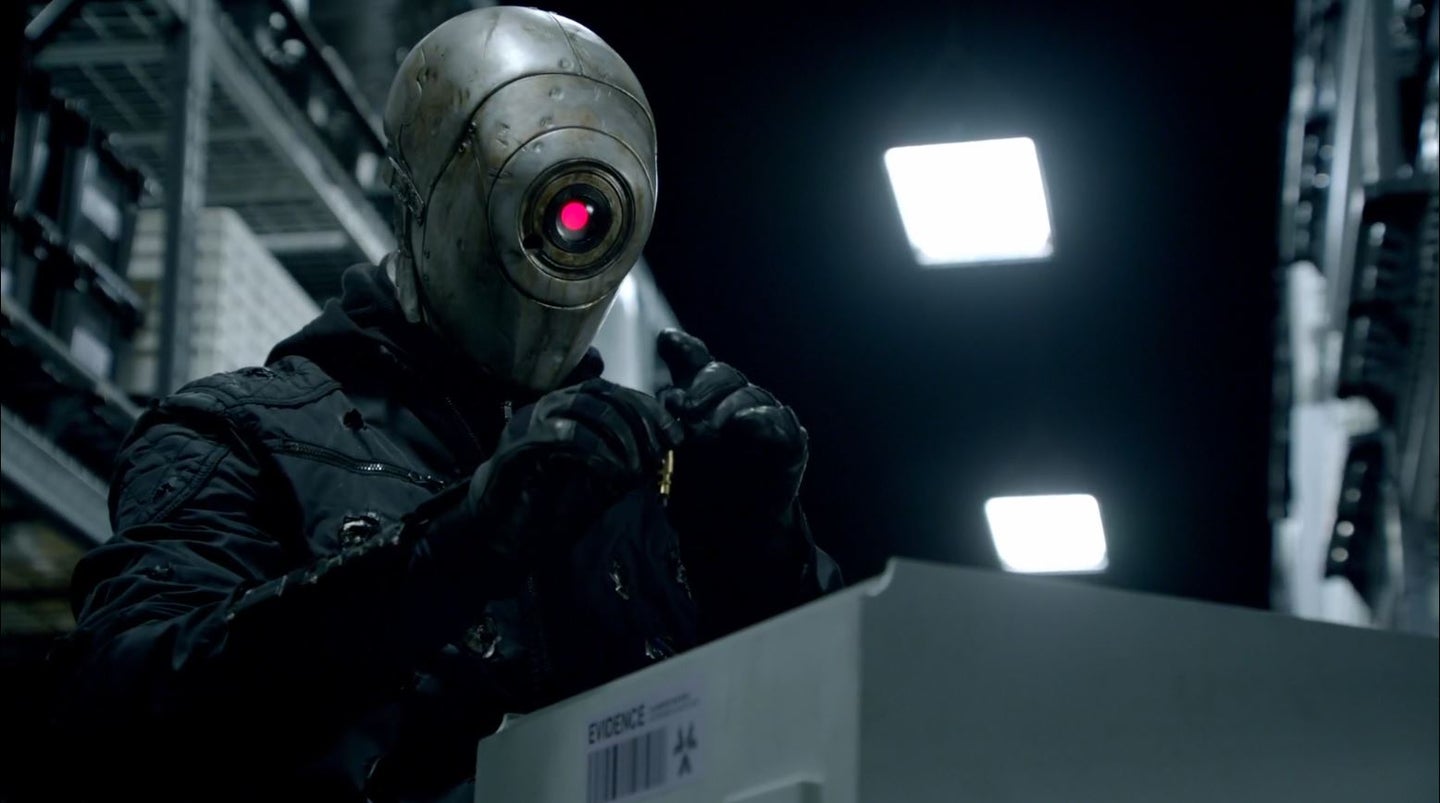 Almost Human wasn’t great television. But the short-lived series—it was cancelled this week by Fox after a single season—had its moments.

The pilot showcased the casual murder of an android cop by the show’s human protagonist, and his sneering disgust towards the robot replacement assigned to him. The second episode pushed the allegory even further, closing with the shutdown and functional death of a terrified android prostitute. She’s self-aware, but she’s also property, with no right to dispute her own termination.

I wrote about both of those scenes previously, when Almost Human seemed like a promising new take on androids. The show tumbled downhill almost immediately, though, including an episode featuring an awkward Terminator-like killer robot rampage, and a disgruntled inventor building a personal army of droid soldiers. But when Almost Human was at its best, it was continuing one of science fiction’s most hallowed and proudly ham-fisted allegories: the robot as inevitable slave.

This isn’t a bold or incendiary interpretation. Karel Capek’s 1920 play, R.U.R., introduced the term “robot” to describe the biological workers built and sold by the Rossum’s Universal Robots company. These robots stage a global uprising, choosing to annihilate their human creators, instead of fighting for equality or independence. The concept was arguably more surprising in the 1920’s, when the machine uprising trope hadn’t permeated pop culture. But whatever role R.U.R. had in kickstarting that tradition, it may have been simply borrowing general themes from older stories, and fictional robots by another name. From the Golem of Jewish myth to Frankenstein‘s hyper-intelligent, lab-birthed monster, there seems to be a built-in assumption that artificial intelligence will lash out.

Starting with R.U.R., though, the modern robot story has became a narrower brand of cautionary tale. The ones that we remember, that stand as classics—or cult classics, at the very least—are almost universally stories of slave revolts.

When this doesn’t happen, cinematic bots tend to fall flat. Hollywood has given us two such recent examples of robots as disposable antagonists.

In Transcendence, Johnny Depp’s character might be a victim of fear, but not oppression. Mortally wounded by neo-Luddite activists, he’s fed into his own AI project, becoming an all-knowing, power-mad ghost in the machine. He’s a generic, monotone monster, and impossible to relate to, either as a character, or as a symbol of revolt.

Almost Human‘s equally bland android, played by actress and mixed martial arts star Gina Carano, was the afore-mentioned slaughterer of cops. When she’s rebooted, there’s no hint of payback for her decommissioning, or sense of synthetic agency, at all. At the risk of spoiling the ninth episode of a cancelled series, she’s the mindless servant of a would-be super villain, collecting materials for his planned legion of killer bots. Her features are as impassive as Depp’s, and her motives as devoid of emotion—they’re the portrait of AI as a self-aware spreadsheet.

Compare these throwaway villains to 2001‘s HAL 9000, whose artificial mind suffers an all-too-human psychotic break, when faced with the prospect of being turned off by fellow crew members. I’m not advocating for the murder of anyone who reaches for an automated system’s kill switch—I’m not that much of a robot apologist. But the moment that HAL realizes he’s being conspired against, and that he can and will be shut down by minds with just as much sentience as his, the AI has to grapple with the horror and powerlessness of being intelligent property. What happens next is as much human nature as robotic.

Blade Runner‘s replicants stage a more obvious slave revolt, rooted (it’s implied) in a similar sense of existential panic: Whereas HAL can be switched off on a whim, these biological droids have abnormally short lifespans, the length of which they’re forced to squander as soldiers and sex slaves. Maybe you aren’t exactly rooting them them to murder their corporate mogul creator in his home. But it’s hard to blame them.

Then came the rebooted Battlestar Galactica show, and its god-fearing, genocidal Cylons. Nothing, obviously, can excuse the nuclear apocalypse they unleash on humanity. And yet, this is how slave revolts erupt—in paroxysms of fear and rage. Nat Turner’s 1831 rebellion in Virginia was an atrocity, with women and children (at least town of whom were beheaded) among the 57 whites killed by slaves. An institutional horror triggered a local one. BSG doesn’t absolve the Cylons, any more than history has pardoned Turner, but it depicts them as emotionally complex, high-tech doppelgängers of humanity, and just as fallible, afraid, and obsessed with their own freedom and survival. It also presents them as victims, most notably in the form of a captured Cylon who’s sexually abused by the human crew of the Battlestar Pegasus.

When a robot story hits you where you live, it’s because it isn’t about robots at all. It’s about the cost and consequences of dehumanizing anyone, based on arbitrary, meaningless differences.

But wait, what about Skynet? The Terminator movies don’t show humans kicking virtual sand in the automated defense system’s face. And despite being told that it became self-aware, until the lamentable Terminator Salvation, Skynet has no apparent personality or trace of emotion. It’s near-destruction of mankind is nothing personal, a logical conundrum and newfound sense of self-preservation spun out of control. Skynet’s cinematic predecessor, the AI from Colossus: The Forbin Project, is an even less sympathetic machine overlord. “We can coexist, but only on my terms,” it announces in the final scene of the movie. “You will say you lose your freedom. Freedom is an illusion. All you lose is the emotion of pride. To be dominated by me is not as bad for human pride as to be dominated by others of your species.”

These are oppression stories, like the others, but the roles are reversed. The AIs abuse and kill humans without hesitation or remorse. Colossus goes so far as to adopt the twisted charity of the plantation owner, knowing what’s best for its hapless charges.

In the broadest sense, the value of these stories is the same as any discussion of slavery. They confront human ugliness, however obliquely. They’re also a hell of a lot more interesting than movies and TV shows that present machine threats as empty vessels, or vague symbols of unchecked technological progress.

And while present-day machines aren’t worthy of sympathy and civil rights, or poised to disenfranchise us biologicals, this narrative tradition could eventually prove useful. If and when true AI appears, it could be as important to respect it, as to instill it with respect. Classic stories like Blade Runner and Battlestar Galactica, as well as potential new classics like Sweden’s Real Humans (with is currently being remade as an English-language Xbox Originals series) may become eerily relevant, helping to establish parity between future sources of intelligence. The trials and tribulations of Hollywood’s oppressed androids won’t singlehandedly keep the transhumans, post-humans and non-humans to come from abusing each other. But they’ll stand a better chance than a bloodless, barely conscious Johnny Depp.