Sexually transmitted diseases are at an all time high (again). But why?

Here's what you should know about the CDC's new data. 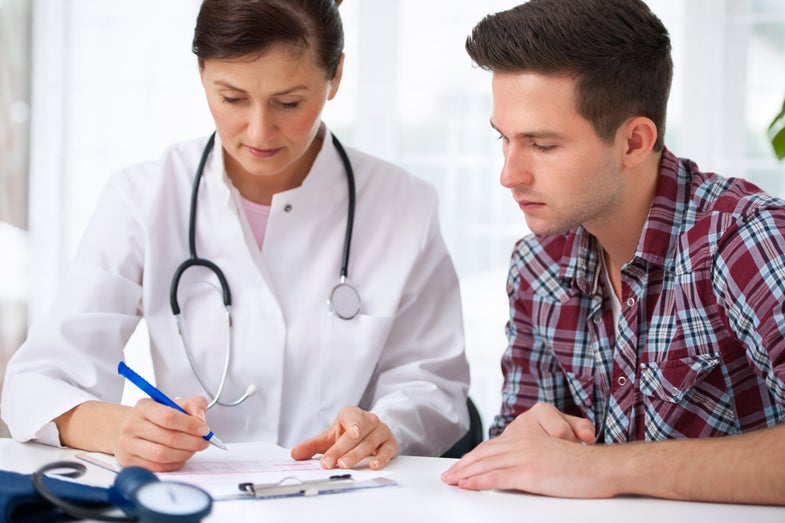 A record-breaking number of sexually transmitted infections were reported in the United States in 2017, according to the Centers for Disease Control and Prevention (CDC). All told, there were nearly 2.3 million cases of chlamydia, gonorrhea, and syphilis—200,000 more than in 2016, which was a record-breaking year in its own right.

“We are sliding backward,” Jonathan Mermin, director of CDC’s National Center for HIV/AIDS, Viral Hepatitis, STD, and TB Prevention, said in a statement. “It is evident the systems that identify, treat, and ultimately prevent STDs are strained to near-breaking point.”

But while better healthcare is sorely needed to treat this problem, you can do your own part to fight off the spread of infection—and the first step is to understand that sexually transmitted disease can happen to anyone.

Quick note about acronyms; The CDC uses STD in its reports, but when we speak broadly about sexual health, STI is actually more accurate. Many infections do not turn into “diseases,” which alter the body’s function. Herpes, for example, fails to cause symptoms in the vast majority of people infected with it. Generally, STI covers more bases than STD. But since the CDC’s report focuses on people who’ve been diagnosed with infections by a doctor, it sticks with the older, more familiar acronym: STD. We now return you to your regularly scheduled article.

The CDC’s most recent complete report is for 2016, which showed that chlamydia, gonorrhea, and syphilis (the three infections that doctors are required to report) were on the rise. That report doesn’t include HIV, one of the most notorious STIs in the country. On average (and across most individual demographic groups), rates of HIV were on the decline as of the last data assessment. The CDC’s 2016 report does not include any data that refutes that, and the increasingly widespread use of drugs to prevent transmission makes it unlikely that HIV rates are going up. Also worth noting: while herpes wasn’t lumped into the 2016 report (as it’s not mandatory for doctors to report a diagnosis), you almost certainly had that before 2016 started anyway.

The increases from 2016 to 2017 are worrisome, but they become much more troubling when compared to data from just five years ago: since 2013, gonorrhea diagnoses have increased 67 percent overall, and have nearly doubled among men during that time. Syphilis cases went up by 76 percent, particularly among men who have sex with men (though infection rates in women are also rising).

How worried should people be about these infections?

The good news is that all three of the aforementioned infections are bacterial, and they’re generally easy to treat. The bad news is that tricky “generally.”

Antibiotic resistance—the evolution of bacteria to evade the drugs we’ve designed to kill them—is on the rise, and the bacteria that cause STIs are no exception. A recent report by the World Health Organization (looking at data from 77 countries) found that gonorrhea is increasingly resistant to antibiotics. The organization called for new antibiotics to add to our line of defense. Unfortunately, they reported that only three such drugs were in any stage of development at the time.

“We expect gonorrhea will eventually wear down our last highly effective antibiotic, and additional treatment options are urgently needed,” Gail Bolan, M.D., director of CDC’s Division of STD Prevention, said in a statement. “We can’t let our defenses down—we must continue reinforcing efforts to rapidly detect and prevent resistance as long as possible.”

As chlamydia becomes more common, it too will no doubt increasingly evade pharmaceutical interventions. Both chlamydia and gonorrhea are often asymptomatic but can cause pain and infertility if left untreated.

Syphilis is typically still easy to treat with good old penicillin—though again, increased infection rates offer more chances for the bacteria to develop resistance—but it might actually be the most troubling infection in the CDC’s 2016 report. That’s because people aren’t getting treated, and that, in turn, is causing a rise in a potentially fatal fetal condition that simply shouldn’t exist in the age of antibiotics.

Congenital syphilis is a terrible disease. When syphilis goes untreated during pregnancy, miscarriages are incredibly common. And 40 percent of fetuses with syphilis that are carried to term are stillborn or die shortly after birth. Those who survive can suffer from deformed bones, anemia, enlarged livers and spleens, jaundice, meningitis, rashes, blindness, deafness, and other brain and nerve-related problems. 2016 saw 628 cases of congenital syphilis in the U.S., up from 492 in 2015.

The sharp increase in this particular condition gets at the crux of the whole issue: it’s not just that more people are getting STIs. It’s that they’re not getting adequate access to healthcare.

“This is a completely preventable problem,” Gail Bolan, director of CDC’s Division of STD Prevention, told CNN. “Every baby born with syphilis represents a tragic public health system failure. All it takes is a simple STD test and antibiotic treatment to prevent this tragedy from occurring.”

Why are rates going up?

It’s a tale as old as fear-mongering World War II posters about the dreaded VD (that’s venereal disease, not Victory Day). Americans, on the whole, are really bad at talking about sex, and even worse at talking about sexually transmitted infections and diseases. But we’re long overdue for a national conversation on prevention.

As recently as 2013, one study found, half of patients visiting Sexually Transmitted Disease (STD) clinics were unwilling to use their health insurance to cover the cost of their visit—likely because of privacy concerns, the researchers concluded. In 2016, the United States budget for “Abstinence Only Until Marriage” sex education in schools—which has been shown time and time again to be ineffective in combating both teen pregnancy and sexually transmitted infections—was increased to $85 million per year. The average high school health course includes less than four hours spent talking about all Sexually Transmitted Infections (STIs) and pregnancy prevention combined, and 87 percent allow guardians to exclude their children from even this coursework.

So on the one hand, it’s not surprising to hear that rates of these infections are going up, on average, instead of down. And given the lack of education and discourse on these health issues, it would make sense for many Americans to interpret the findings of the Centers for Disease Control’s annual Sexually Transmitted Disease Surveillance Report as the result of some sort of moral decline. But according to medical professionals, the problem isn’t that people are having more sex—the problem is that sexual healthcare, and the policies that fund it, are in dire shape.

A recent study actually found that teens are waiting longer to have sexual intercourse, and are more likely to use contraception. This is slightly misleading, since an increase in oral sex—and a lack of thorough sex-ed to teach young people that protection is also needed during these sort of encounters—could help STIs keep spreading. But still, doctors don’t think individual behaviors are to blame for these upticks.

“People working in this area have known for several years that decreases in resources committed to STD prevention would ultimately result in increases such as we’ve seen,” says J. Dennis Fortenberry, a professor of pediatrics at Indiana State University School of Medicine. Fortenberry serves on the American Sexual Health Association’s board of directors, and is also the president of the American Sexually Transmitted Diseases Association. He and other clinicians say that funding cutbacks for both prevention education and healthcare are to blame.

“We have passed a threshold of minimal investment and are seeing the predictable consequences,” he says.

Funding issues aside, he says, it’s important to remember that STIs are disproportionately more common in young and marginalized people. “STI are consequences of far more than individual behaviors, and are products of our society’s continued inattention to community, to racism, sexual and gender discrimination, and tolerance of violence,” he says. Without a broad commitment to sexual health as a public health priority, these rates will keep going up.

“We can’t address STI epidemics by pretending they are simply a matter of individual choice,” Fortenberry says.

What can I do about it?

Supporting policies that give everyone access to reliable medical care—and comprehensive sex education, early and often—is a great start.

If you’re worried about your own personal sexual health, well, that’s easier: get tested. Often. Get tested more than you think you need to get tested, and educate yourself about the actual risk factors for sexually transmitted infections. If you swear you’d never, ever have sex with someone with herpes, but haven’t asked for an STI panel at the doctor in over a year? You haven’t educated yourself. If you blanch at ads for drugs that allow HIV-positive people to stop using condoms with their HIV-negative partners but yourself engage in oral sex without condoms or dental dams? Ditto. We need less stigma and more efforts to actually improve our health.

“Unfortunately, STDs carry enormous stigma in this country, and it’s hard for people to come forward for treatment,” David Harvey, executive director of the National Coalition of STD Directors, told CNN. “Ironically, HIV is an STD, but we have a very visible community who advocates and works to tell stories about the impact of HIV on people’s lives. We don’t have that going for us with gonorrhea, syphilis and chlamydia. We need a network of voices that say it’s OK to get help.”

Given that so many medical practitioners are less informed about STIs than they should be, the onus often falls on patients to ask for testing. Don’t assume your annual physical has you covered, and don’t be embarrassed about what your test results might show. Knowing your status is always, always better than blissful ignorance.

Update: A version of this article was originally published in 2017. It has been updated to reflect new data from the CDC.