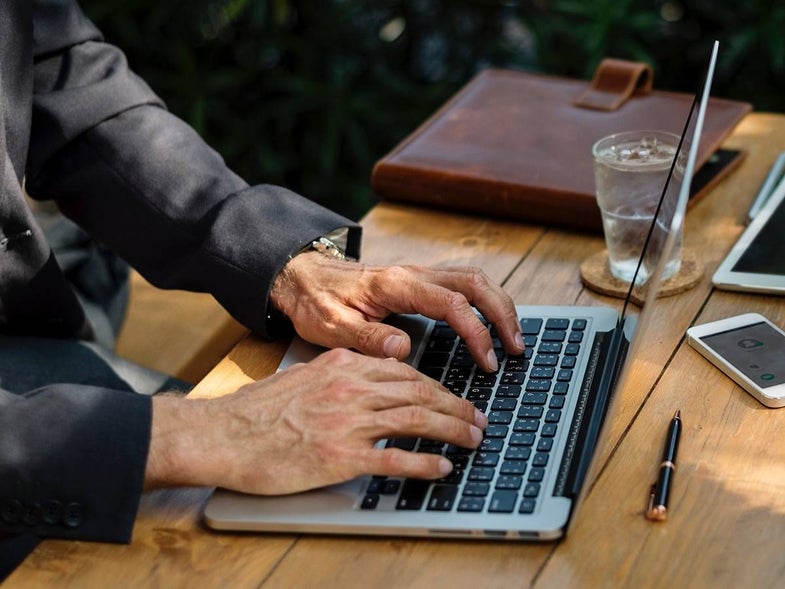 Typing can cause a serious health problem: repetitive strain injury, or RSI, affects hundreds of thousands of people each year. Whether you’re worried about damage or just want to give your fingers a break, voice dictation can help. Thanks to steady improvements in voice-recognition tools, having a computer interpret your spoken text is no longer the exercise in frustration it once was. In fact, depending on your typing speed, it may be quicker for you to speak your text than to type it. Plus, you don’t even need additional hardware—your computer’s built-in microphone should be more than capable of picking up your words.

Whatever operating system and software you’re using, you can find a variety of free tools and commercial packages to translate your voice into print. In this guide, we’ll focus on three of the most popular word processors: Microsoft Word, Apple Pages, and Google Docs.

If you’re using Microsoft’s word processor on a Windows computer, you have several voice-recognition options. This section will address three of them, mostly focusing on the Windows Speech Recognition program built into this operating system.

The integrated voice-recognition service will work on any Windows application, including Microsoft Word. To launch it, type “windows speech recognition” into the search box on the taskbar, then click the app when it appears. The first time you run this software, you’ll need to teach the utility to recognize your voice. Windows has a short step-by-step wizard that will walk you through the process step by step. Over time, the system should get better at recognizing your voice, and you can also train it by right-clicking on the Speech Recognition console, choosing Configuration, and clicking Improve Speech Recognition.

Once you’ve completed the initial voice-recognition setup, you’ll always be able to launch the utility from the taskbar (as previously described). With Speech Recognition, you can control all kinds of computer actions, including launching programs and searching the computer, using only your voice. If that appeals to you, you can set the program to launch automatically whenever you start Windows: Just right-click on the app, choose Options, and hit Run at Startup.

To use the service with Microsoft Word, pull the Speech Recognition console onto the screen, open Word, and move the cursor to the part of the document that you’re currently editing. Then click the microphone button and start talking. Click the microphone again to turn off voice dictation. You can navigate with spoken phrases: For example, say “correct that” to make changes and “go to the end of the sentence” to move around within the text. For a full list of all the supported commands, including ones for punctuation and formatting, head to the Microsoft support document.

While Windows Speech Recognition has been around for years, Microsoft recently introduced a free, experimental dictation plug-in for Microsoft Word, Outlook, and PowerPoint, called Dictate. Follow that link to download it, and then relaunch Microsoft Word. Now, you should see a new Dictation tab on the ribbon menu. To begin speaking words on the page, open this tab and click the Start button. In our experience, Dictate is not quite as accurate as Windows Speech Recognition, but the application is in its early days and may improve over time. And it does have the advantage of being built right into Word itself.

If those two tools aren’t enough for you, try a third-party program. Right now, the clear market leader is Dragon for PC. Thanks to many years of development, it boasts a fantastic level of voice-recognition accuracy, and it fits neatly into all of your Windows applications, including Word. If you want full control over your computer with your voice, and Microsoft’s own tools just aren’t performing as well as you want, then try one of the Dragon packages: You can get a home version for $75, or pony up for the premium version, which has added abilities like speaking through a Bluetooth headset, for $175.

As with Windows, macOS includes an integrated voice dictation system that works with any program, including Microsoft Word and the proprietary Apple Pages word processor.

To set it up, click on the Apple menu, select System Preferences, then choose Keyboard and Dictation. Turn dictation on, and also tick the Enhanced Dictation box, which lets you use the feature when you’re offline. Next, open up a document in either Microsoft Word or Apple Pages. Either choose Start Dictation from the Edit menu or press the shortcut button. By default, this shortcut is set to be two taps on the Function key, but you can change it in the Dictation pane of System Preferences.

Then simply say what you want to type. To add punctuation, say the name of the character you want to use. While you’re dictating, you can also use commands like “new line” and “caps on.” For a full list, review the Apple support page. To stop dictating, click Done or press the Function key once.

If you’re not happy with this integrated solution, you can switch to a third-party alternative. While we still like the Dragon software mentioned previously, Dragon for Mac is only available in a $300 professional version. As powerful as it is—it includes deep learning smarts that let it grow more accurate over time—that’s a lot of money. Still, you get a lot of bang for your buck, including options to transcribe text from audio recordings and set up custom words in the software’s dictionary.

On any operating system: Google Docs

For either a Windows or a macOS computer, you can set up voice dictation on Google Docs with the same straightforward process. As Docs is a web-based app, you won’t need to install any extra software. Just use whichever browser you prefer.

Start by opening a Google Docs document on the screen, selecting the Tools menu, and choosing Voice typing. You can also hit a keyboard shortcut: Ctrl+Shift+S on Windows and Cmd+Shift+S on a Mac. A new microphone button will appear on screen. Click this to start speaking and dictating, though first you may have to grant your browser permission to use the computer’s microphone.

Google’s voice-recognition system is very accurate, so you shouldn’t have to fix too many words or characters. If the system isn’t sure about something you said, it will underline the phrase in question, and you can right-click on these words to see a list of alternative suggestions. To insert punctuation like periods, commas, exclamation points, or question marks, or add new lines or paragraphs, just say so. In addition, Google Docs supports a host of voice commands for selecting and formatting text, adding and editing tables, moving around the document, and more. For a full list of the commands, head to the Google Docs support page. When you’re done dictating, click the microphone button again or say “stop listening.”