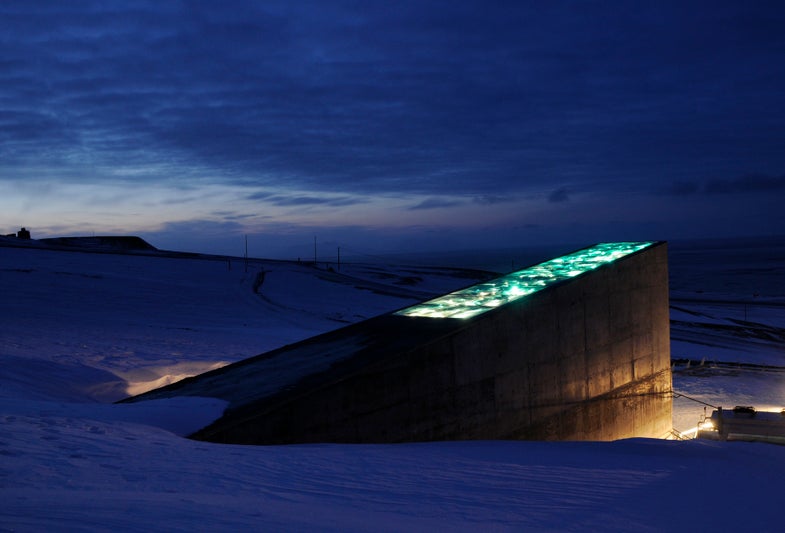 Today, the seeds of 49,000 varieties of crops—including cabbages, wheat, lentils, sweet peas, and many others—will be wheeled into a vault in a mountainside. There they will lay in in sturdy black plastic boxes in a frigid underground vault high above the Arctic Circle, an insurance policy for the entire world’s food supply.

Remarkably, some of the packets being deposited today are descendants of seeds that were removed in 2015, when the remnants of a Syrian-based seed bank withdrew the first seeds from the Svalbard vault, in order to re-establish crops lost during civil war.

The Svalbard seed bank is nine years old, and is located at the ends of the Earth, in Svalbard, an island in Norway far above the Arctic Circle. The low temperatures will help keep the seeds safe for decades, if not centuries. The vault holds 930,821 varieties of agricultural crops from around the world, with a mission to preserve the biodiversity of plants used in agriculture.

“This natural resource is too important to be left to uncertainty,” says Marie Haga, executive director of Crop Trust, the nonprofit that operates the seed bank.

Seeds from thousands of varieties of wheat, rice, vegetables, grasses, and other crops from all around the world rest on the shelves, all backup copies for national and international seed banks just like this located around the world.

While the national seed banks constantly use seeds for research and to provide farmers with seeds for crops, these seeds’ main purpose is to sit and wait, ready to be recalled by those national groups in case one of their samples is destroyed.

“Losing a sample means extinction, and extinction means losing a trait that might have been essential to the evolution or adaptation of the crop in the future,” Cary Fowler, agriculturist and senior advisor to the trust says.

With a changing climate increasingly threatening farmers with unusual temperatures and water availability, farmers are looking for hardy, high yield crops. In addition to changing climate, food producers the world over must continue to grow food for an expanding human population while fighting salinity levels in soil, migrating pests and diseases, and myriad other threats, including armed conflict.

In those circumstances, having a backed up library of genetic traits from all around the world means more options for an uncertain future. And in at least one case, the seed bank has already proven its usefulness.

When the Arab Spring began in Libya in 2011, Fowler called up the head of a seed bank in Syria and asked if he might consider putting some of their already prepared duplicate copies of their seeds into the Svalbard repository. Initially, the counterpart said that Syria was so stable, that it wasn’t immediately necessary. Fowler, who had seen the gleaming state-of-the-art facilities there agreed that it was incomprehensible that anything should happen there.

“I said yeah, I’m sure you’re right, but just in case.” Fowler is quiet for a moment, remembering the war that broke out in Syria soon after that telephone call in 2011. “Just in case pretty much summed up why we had a seed vault,” he says.

Even though initially it didn’t look like the unrest in the Middle East would reach Syria, the regional seed bank, the International Center for Agriculture Research in the Dry Areas (ICARDA) took Fowler up on the insurance policy. Just in case.

In Fowler’s words, “just before all hell broke loose” in Aleppo, and the seed bank there shut down, the last shipment of duplicate seeds made it safely to the seed bank in Svalbard. Then, in 2015, ICARDA re-established itself in Morocco and Lebanon, and asked for its seeds back, the first withdrawal from the seed bank.

“They have lot of diversity of those crops that are very important if you want to have a heat or drought tolerant varieties,” Fowler says.

Now, less than two years later those seeds have helped re-establish that critical seed bank, and copies are being transferred back into the Svalbard seed bank as an insurance policy that everyone hopes they will never need to use again.

“It only takes 34 million United States dollars [per year] to conserve the diversity of the major crops in the world,” Haga says.

That money goes to support 11 national and international collections of seeds, informational systems to tie together the system, and of course the seed vault in Svalbard *. It takes electricity, and therefore, money, to cool the vault to precisely 18 degrees Celsius. That’s easier in the frigid climate above the Arctic Circle, but still takes energy to keep the temperatures consistently low. Other money is needed to transport seeds from around the world into (and out of) the vault, a process that happens only a few times a year to minimize temperature fluctuations in the seed bank.

The money comes from an independent endowment still in the process of being funded. “A modern soccer stadium costs more than a billion dollars,” Haga says. By comparison, she estimates that the $34 million needed to run the seed bank annually could be generated by a $850 million endowment invested conservatively over time. “We can afford that,” Haga says.

Fundraising efforts for the 9-year-old seed bank are underway, to ensure that the mission keeps going for years to come. One partnership with camera company GoPro produced the short documentary below, showing an inside look into what the seed vault is and why it operates. They hope to raise awareness and add more money to the $170 million already in the endowment.

Haga knows that many people have never thought about the biodiversity of the world’s crops. But she is unequivocal about the importance of biodiversity in agriculture for every human on the planet.

“For heaven’s sake, it’s about your breakfast and your lunch and your dinner. You want it to be the food that you want and you want there to be enough of it,” she says.

Whether natural or human disaster, Haga and Fowler hope that the worst will never occur, but they want to be ready when it does.

“I would love to go down in history as being involved with one of the greatest boondoggles in history that ever was.” Fowler laughs before becoming serious again. “You never want an insurance policy to be used.”

But, he adds that rosy vision of the future is unlikely to unfold. “My guess is that in the future we’ll be returning more seeds more often.”