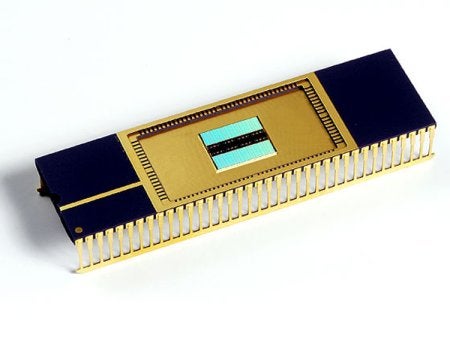 Part of PCM’s current appeal is that it actually works better the smaller it gets, unlike flash memory, which is the current go-to for small devices. Since flash memory saves data as small groups of electrons, the smaller the area you have to work with, the fewer electrons will fit, thus making the memory increasingly unstable.

PCM, on the other hand, actually benefits from shrinking, for a simple reason: smaller crystals melt and freeze faster. Matthias Wuttig, a physicist at RWTH Aachen University in Germany, has developed PCM cells that can switch on in 19 nanoseconds.

The concept of PCM has been around since the 1960s, but has presented persistent challenges for physicists. The first attempts used crystals that required extremely high temperatures in order to melt. By the time new crystal materials that shifted forms at lower temps were developed, gadget memory had already given way to the transistor (yes, flash).

Samsung’s PCM memory, for now, is only 512MB. But, Gregory Atwood, a senior fellow at Numonyx Memory Solutions in Switzerland, speculates in Nature that, as the demand for smaller and smaller memory eclipses what flash can handle, more time and attention will be paid to PCM and its potential to succeed flash as the mobile go-to.