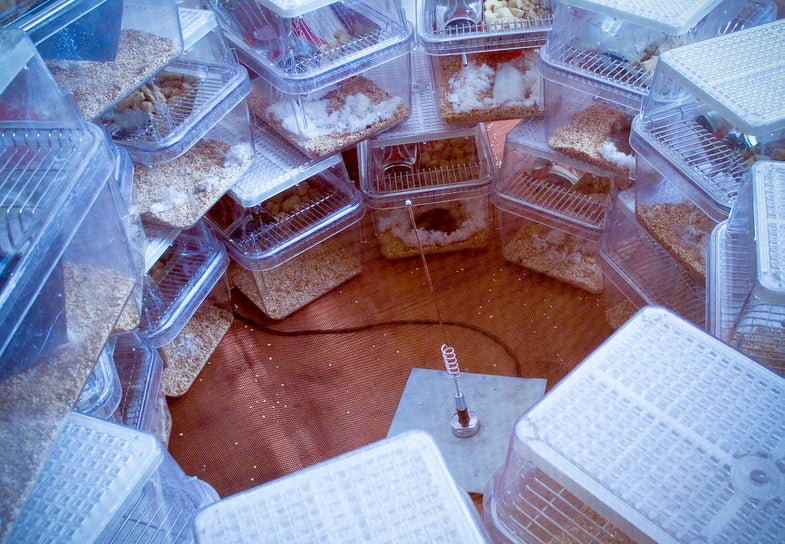 The University of South Florida study showed that the electromagnetic waves erase brain deposits of the harmful protein beta-amyloid, which represents a hallmark of mentally crippling Alzheimer’s disease. The exposure also prevented build-up from the protein in younger Alzheimer’s mice — a possible lead on future non-invasive Alzheimer’s treatments for humans.

Almost 100 mice endured two 1-hour periods of daily exposure to an antenna that generated a cell phone signal, during a period of seven to nine months. Most of the mice were genetically engineered to develop Alzheimer’s, but some non-demented mice also allowed researchers to see how the electromagnetic waves affect normal memory.

Even the non-demented mice saw benefits from the exposure through increased blood flow and energy metabolism in the brain. That improved brain activity actually boosted the memory of the mice to above-normal levels.

“It will take some time to determine the exact mechanisms involved in these beneficial memory effects,” said Gary Arendash, a biomedical researcher at the University of Southern Florida. “One thing is clear, however — the cognitive benefits of long-term electromagnetic exposure are real, because we saw them in both protection- and treatment-based experiments involving Alzheimer’s mice, as well as in normal mice.”

Future non-invasive treatments based on electromagnetic exposure might even help soldiers suffering from traumatic brain injury due to blasts, Arendash and his colleagues said. Such traumatic brain injuries also involve boosted production of the troublesome beta-amyloid plaque.

The study also addressed worries about cell phone exposure leading to cancer, and found no autopsy evidence of abnormal growth in the brains of the mice. That finding seems consistent with the positions of the World Health Organization, the American Cancer Society, and the National Institutes of Health, which all concluded that no scientific evidence points to bad health effects from cell phone use.

The researchers have already begun testing whether different electromagnetic frequencies or strengths can provide even better cognitive benefits. But for now, people can stop with the guilt about giving grandma or grandpa a brand new cell phone to avoid visits. Maybe they can even feel good.