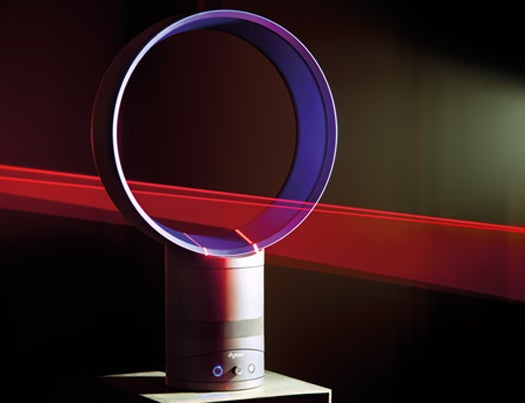 Ever since Schuyler Skaats Wheeler introduced the first axial-bladed electric desk fan in 1882, fan technology has remained remarkably conservative. But that classic bladed design wasn’t good enough for the innovative people at Dyson. With their new desk fan, Dyson has thrown out over a hundred years of axial desk fan technology to create the first fan that provides a continuous stream of smooth air.

The fan, called the Dyson Air Multiplier fan, does away with the blades used in common desk fans. Instead, the Air Multiplier uses a loop whose cross-section is shaped like an airplane wing to funnel air towards the user. Air is pulled in through tiny holes in the fan’s pedestal, and pushed out through a narrow slit that runs the circumference of the loop. The loop , like the wing of a plane pushing air down to generate lift, uses the air stream to impell room air towards the user in a single continuous stream 15 times faster than the airflow pulled in through the base. By utilizing the wing shape instead of a number of fan blades, the Air Multiplier generates a gentler, smoother breeze.

The fan will initially come in two models, a 10-inch version that will retail for $300, and a 12-inch model that will go for $330. Neither model uses less energy than a conventional fan, but if there’s one thing worth paying for, it’s turbulence-free airflow.