It’s been 10 months since the code for the Windows 7 beta leaked to BitTorrent. That leak was quickly followed... 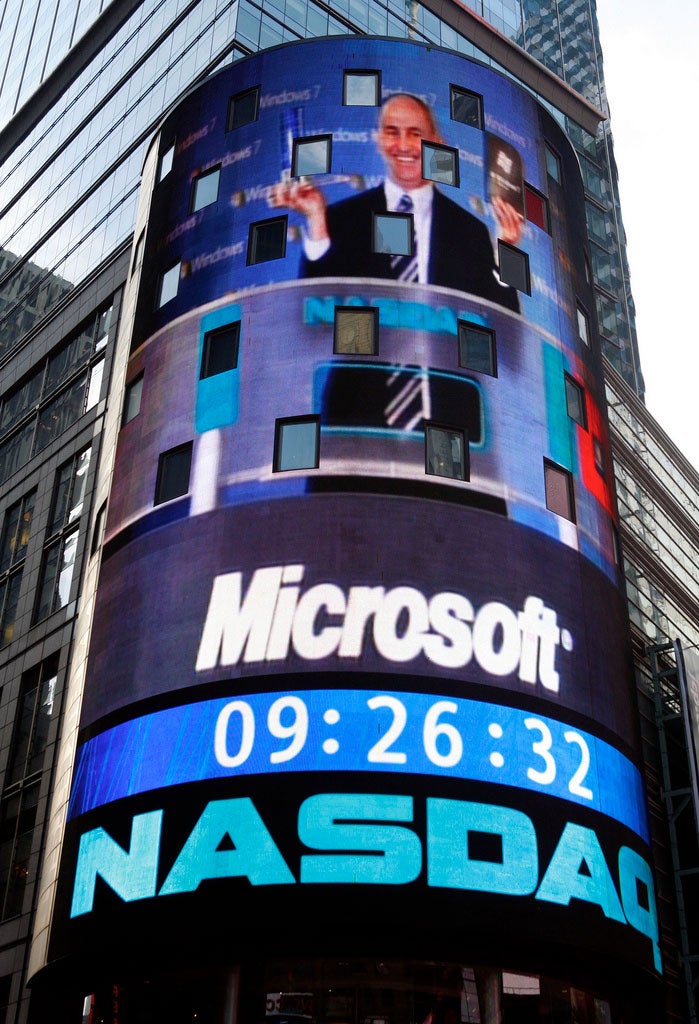 It’s been 10 months since the code for the Windows 7 beta leaked to BitTorrent. That leak was quickly followed by an official free beta release the first week of January and a release candidate in April. Hardware manufacturers have had their hands on the final version since July, and today is finally your day–the day you can buy a machine running Windows 7 pre-installed.

In fact, Microsoft today started selling third-party hardware from their Web site for the first time in tandem with the launch. Obviously there’s a lot that’s been refined and tweaked with the new Windows, but one of the biggest additions is the incorporation of multitouch display support in the OS’s core. So naturally, pretty much every major hardware manufacturer had a landslide of new desktops, laptops and netbooks designed for Win 7. Check out our multiouch hardware gallery to see our picks for the eight best-in-breed Win7 machines. 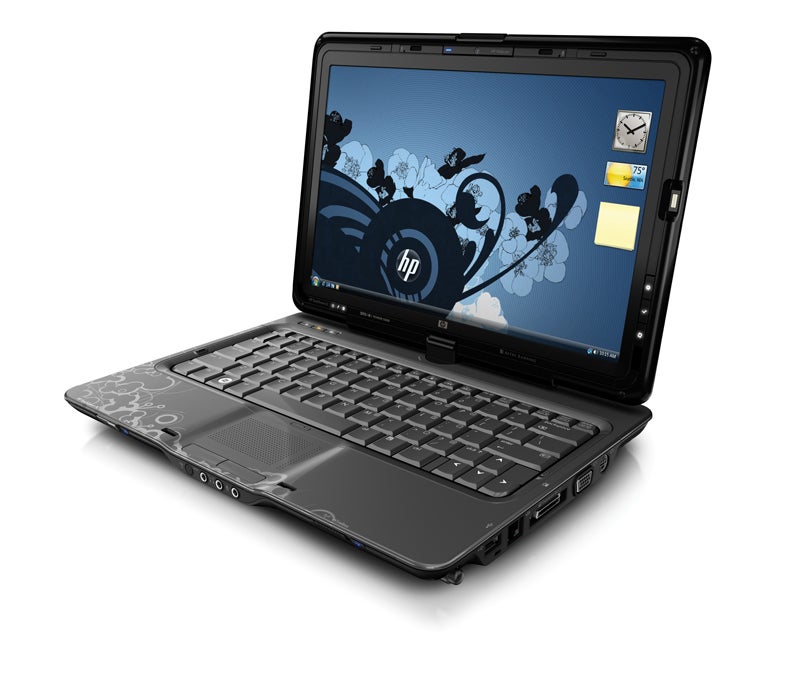 When the TouchSmart tx2 came out last November, it was the first consumer laptop with multitouch. That’s because it used a screen and software from a company called N-Trig, which developed a way to make different programs respond to pinches even though the operating system as a whole didn’t understand them. Now HP’s updating the tx2 to run on Windows 7—which builds multitouch support into the operating system by, in part, building in some of the original tx2’s code. Screen Size: 12.1 in. Touchscreen Tech: Capacitive (screen senses electrical conductivity, like the iPhone; works with fingers or included N-Trig digital pen) Price: From $800 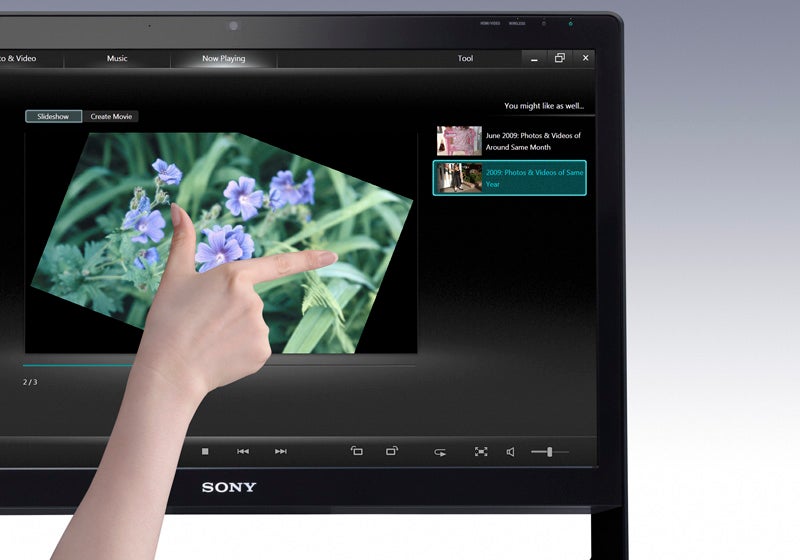 With a 24-inch screen, the Vaio L all-in-one is at least an inch bigger than any of the other new multitouch PCs. (That is, if you don’t count HP’s 42-inch, $2,800 monitor that intended for commercial use in stores and hotels.) Use all 24 high-def inches for ordinary computer tasks, or, on some models, to watch flicks from a built-in Blu-ray player, TV tuner, or HDMI input. Screen Size: 24 in. Touchscreen Tech: Infrared (works with fingers or opaque objects) Price: From $1,300 (est.) 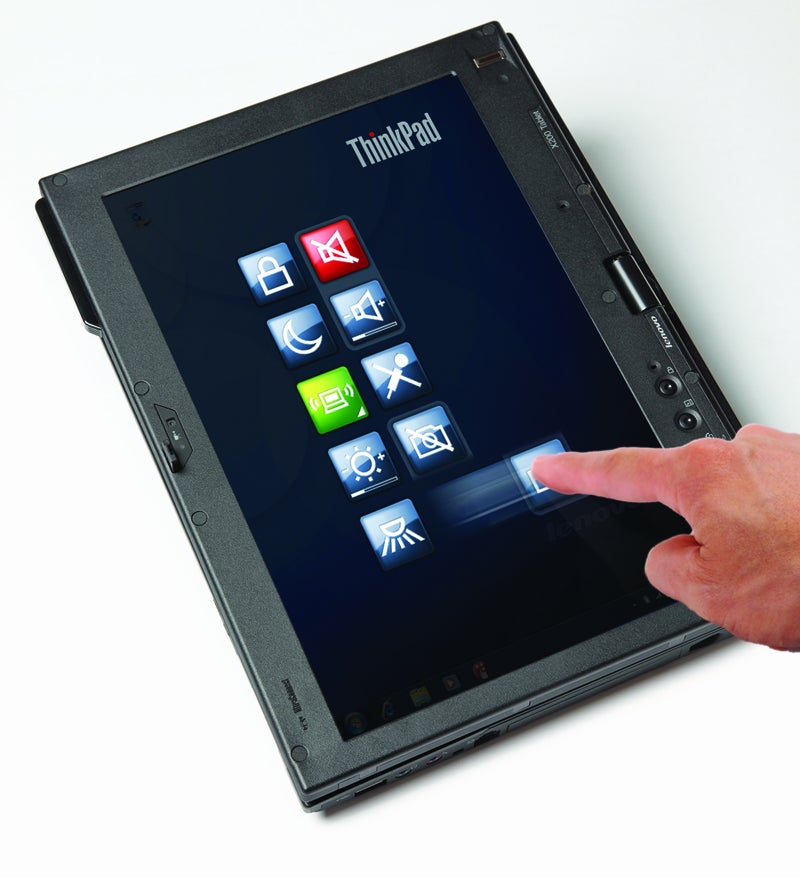 This is the smallest and lightest multitouch laptop around, measuring less than a foot and weighing 3.5 pounds. That means it’s easy to carry and, when you flip the screen into tablet mode, hold and write on like a notebook. Keep an eye out for even smaller multitouch PCs soon, although they’ll be less powerful than this full-fledged business model. (Asus has displayed prototypes of a tiny, budget netbook.) Screen Size: 12.1 in Touchscreen Tech: Capacitive (works with fingers or included digital pen) Price: From $1,729 (est.) 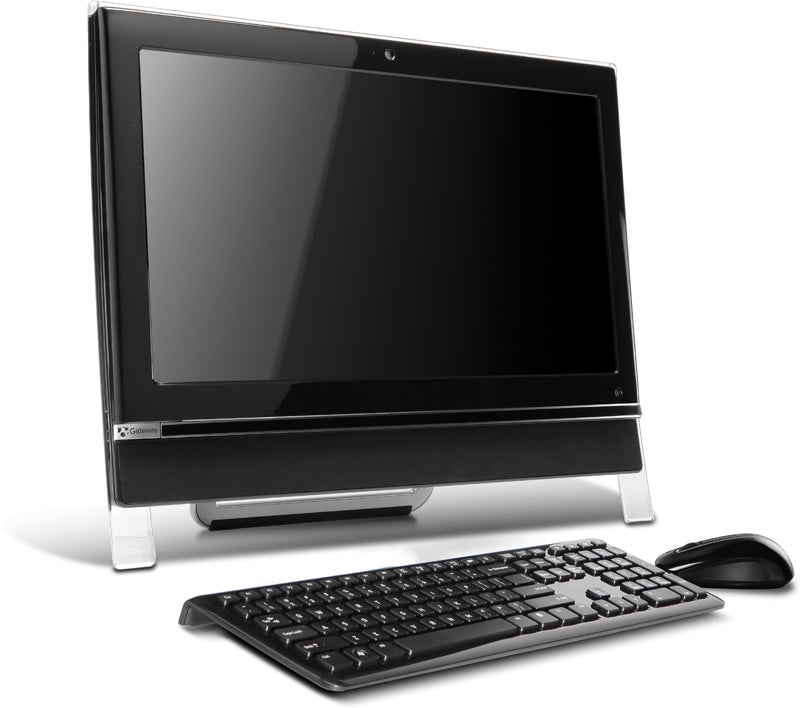 The Most Budget-Friendly: Gateway One ZX4800 Series

This sleek all-in-one desktop costs $750, undercutting other multitouch PCs by at least $50 even though it has a big 20-inch screen. Like several other manufacturers, Gateway decided to take advantage of touch by creating some special finger-friendly apps, such as a notebook-like program for scrawling memos with your finger. Screen Size: 20 in. Touchscreen Tech: Optical (camera-based; works with fingers or opaque objects, like a stylus) Price: From $750 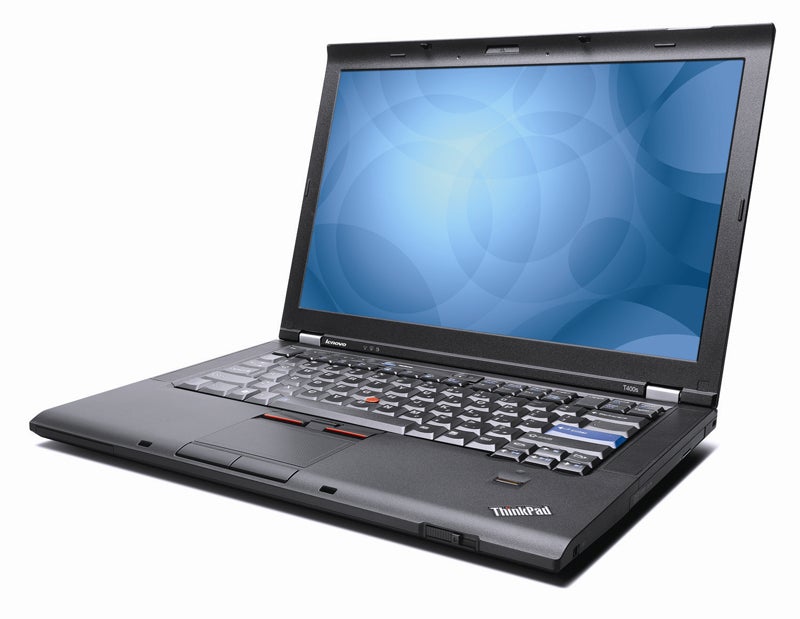 You and a pal can both re-size photos at the same time with the T400s, which can register up to four finger-presses at once. (Many other multitouch screens register just two, although four-touch ability will eventually be enabled in all laptops that, like the 400s, use screen tech from N-Trig.) Other great uses of whole-hand multi-touch: Drawing four squiggles at once in the Windows 7 Paint program, or grabbing 3-D products to rotate and morph them in pro modeling programs. Screen Size: 14.1 in. Touchscreen Tech: Capacitive (works with fingers) Price: From $2,000 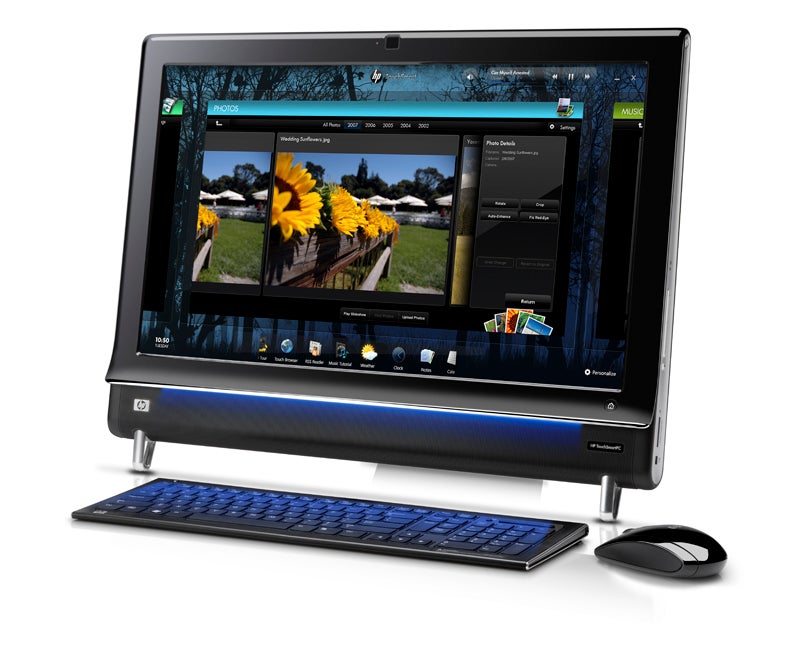 This 23-inch computer works just as well as a TV—a 1080p HDTV, at that. It comes with a built-in TV tuner, for channeling free over-the-air stations, and an HDMI port for connecting game consoles, video-players, or cable boxes. How does multi-touch help the boob-tube? A special finger-friendly Hulu app lets you quickly flick through shows. Screen Size: 23 in. Touchscreen Tech: Optical (works with fingers or any non-opaque object) Price: From $1,049 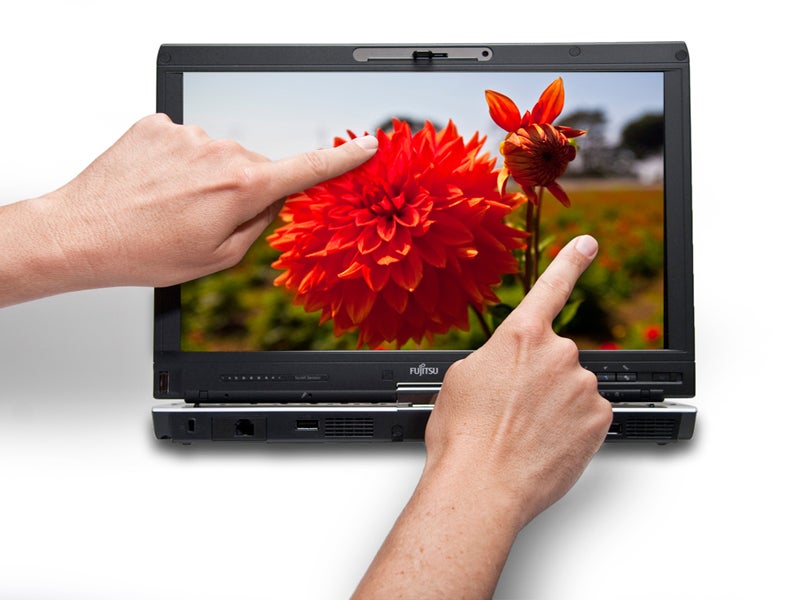 The New and Improved: Fujitsu LifeBook T5010 (with multitouch option)

This T5010 started life last year as a tablet that let you scrawl with a digital pen. Now a new version adds a capacitive touch-sensing layer to the pen-based one, so you can tap and swipe with your fingers, too. You’ll get a boost from Windows 7 even if you stick with the pen: The new OS offers improved handwriting recognition. Screen Size: 13.3 in. Touchscreen Tech: Capacitive plus Wacom’s Electromagnetic Resonance digital-pen layer (works with fingers and included digital pen) Price: From $1,859 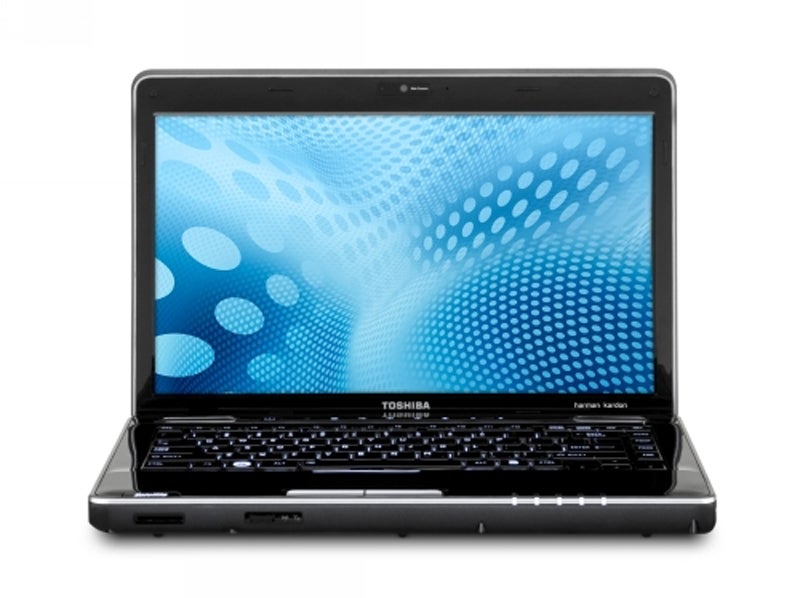 The M505 looks just like a standard clamshell laptop, but it packs in a multitouch display, so when you get tired of using a tiny trackpad to manipulate the cursor, you can reach up and poke the screen. Toshiba also added some touch-friendly apps, like one that lets you find a much-needed document by flicking through thumbnails of recently viewed files. Screen Size: 14 in. Touchscreen Tech: Capacitive (works with fingers) Price: $950
Corinne Iozzio