In the ongoing quest to turn real-world objects into iPhone applications, HP has released a calculator app that is a... 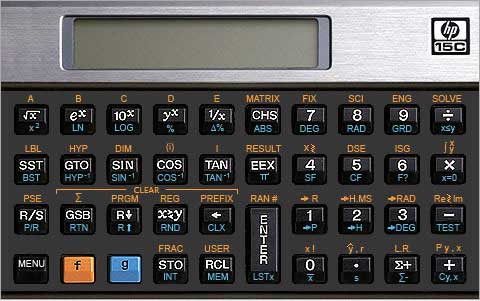 In the ongoing quest to turn real-world objects into iPhone applications, HP has released a calculator app that is a near perfect imitation of the original HP15C. Released in 1985, this full-function scientific calculator had a root-solver, could handle matrix operations, and supported numerical integration. It also lasted about six months on one battery-–or about five months and 29 days longer than the iPhone. But save for that sacrifice to modernization, the HP15C on the iPhone is pretty slick.

The iPhone version (available in iTunes) is a faithful rendition-–it mimics every last feature, including the famous “solve” key that shows the root of an equation (look for it in the far upper right), goofy click sounds, and even photo-realistic detailing to really fan the nostalgia flames.

Key clicks are incredibly responsive, and just like the physical version, the app allows you to program up to 448 lines of calculations for rapid retrieval. The app can be used in landscape mode imitating the original or in a truncated version vertically.

For anyone not classifying themselves as hardcore calculator nerds, the $30 price tag may be too much to justify any gains over the iPhone OS’s own non-retro (and free) scientific calculator app. But if you can feel your synapses quickening their firing rate by just looking at that retro face, $30 is certainly less than the $200 or so you’d blow for the real thing in good condition on eBay.