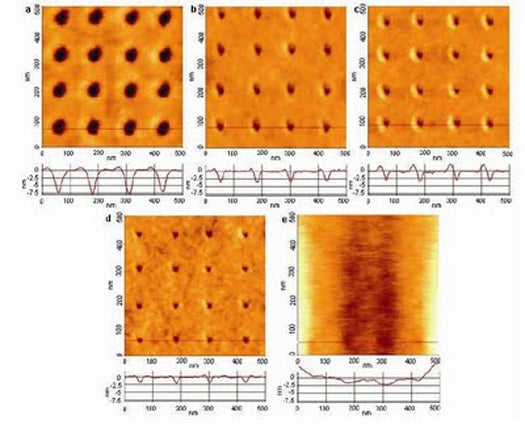 Even though computer memory has become cheaper and cheaper, the materials chemistry behind storage has not changed significantly in a long time. Now, thanks to a breakthrough by Korean scientists, that’s all about to change.

The scientists have created the first material that could allow “millipede” data storage, a super-dense form of memory that first debuted ten years ago but has not yet become practical. Millipede memory can store a terabyte of memory per square inch, but until now, it required extremely high temperatures to operate. Thanks to this new material though, chips the size of pencil erasers with more storage space than the largest iPod could soon find their way into watches, pencils, and really almost anything.

Millipede data works the same way as an analog record player, with a super-fine needle carving microscopic grooves into a material, and then running along those pits and grooves to read it. Previous millipede systems invented by IBM required an incredibly hot needle to do the burning, and the same amount of heat to reform the storage material for rewriting.

The breakthrough pioneered by scientists at Pohang University of Science and Technology in Kyungbuk, Korea, utilizes a special polymer called a “baroplastic.” Baroplastic polymers are usually hard, but they soften under pressure. In this system, pressure replaces heat in the reading and writing of the millipede storage chip, thus allowing the process to occur at room temperature.

However, this does introduce some new problems. The extreme pressure needed to convert the baroplastic polymer from its hard state to its soft state would put considerable wear and tear on the needle, and the need to constantly replace a microscopic needle detracts from the practicality of the system. Luckily, current research into multilayered materials that combines the baroplastic polymers with another material that’s easier on the needle offer a way around that problem.