Prying open the secrets of a giant lizard's poisonous bite 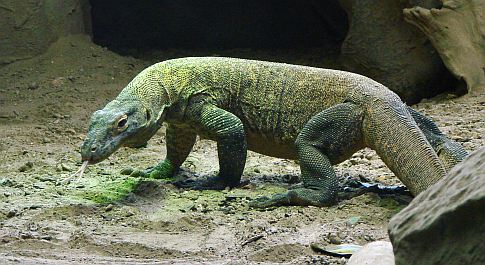 One look at this creature and you’ll think you’ve stepped into a scene in Jurassic Park. But this jumbo reptile is alive and well and living in the Indonesian Islands. The Komodo dragon is the largest living lizard on Earth — they can measure up to 10 feet long and weigh as much as 140 pounds. They also have about 60 serrated teeth and have been known to consume up to 80 percent of their body weight in a single meal. That’s no garden gecko.

It’s long been known that Komodo dragons pack a powerful bite, but a new study by a research team at the University of Melbourne, Australia, shows that the effectiveness of the Komodo’s bite comes from a combination of venom and highly specialized serrated teeth. Using magnetic resonance imaging (MRI) techniques, the team found that the Komodo dragon has the most complex venom glands ever described for any reptile, and that its giant extinct relative Megalania (Varanus priscus) was the largest venomous animal to have ever lived.

The research team studied the Komodo dragon’s bite by using computer techniques to analyze the amount of stress in a dragon’s jaws and compare them to those of a crocodile. Although the dragons have much weaker bites than crocodiles, an MRI of a preserved dragon head revealed complex venom glands and serrated teeth that cut deep lacerations, which allows the venom to enter the body of prey. The researchers tested the dragon’s venom and found it to be similar to that of the Gila monster and many snakes — it widens the victim’s blood vessels, causing a severe drop in blood pressure and thereby inducing shock. This finding may explain why Komodo dragon prey become still and unusually quiet very soon after being bitten. Prey also bleed profusely after being bitten, which confirms the team’s discovery that the venom is rich in toxins that prolong bleeding.

Komodo dragons are native only to a few volcanic islands in Indonesia, where there are an estimated 3,000 living in Komodo National Park and the surrounding areas. Although fatal attacks on humans are rare, a nine-year-old boy was mauled to death by a dragon on Komodo Island in June 2007.

The findings were published in the May 19 issue of the journal Proceedings of the National Academy of Sciences.